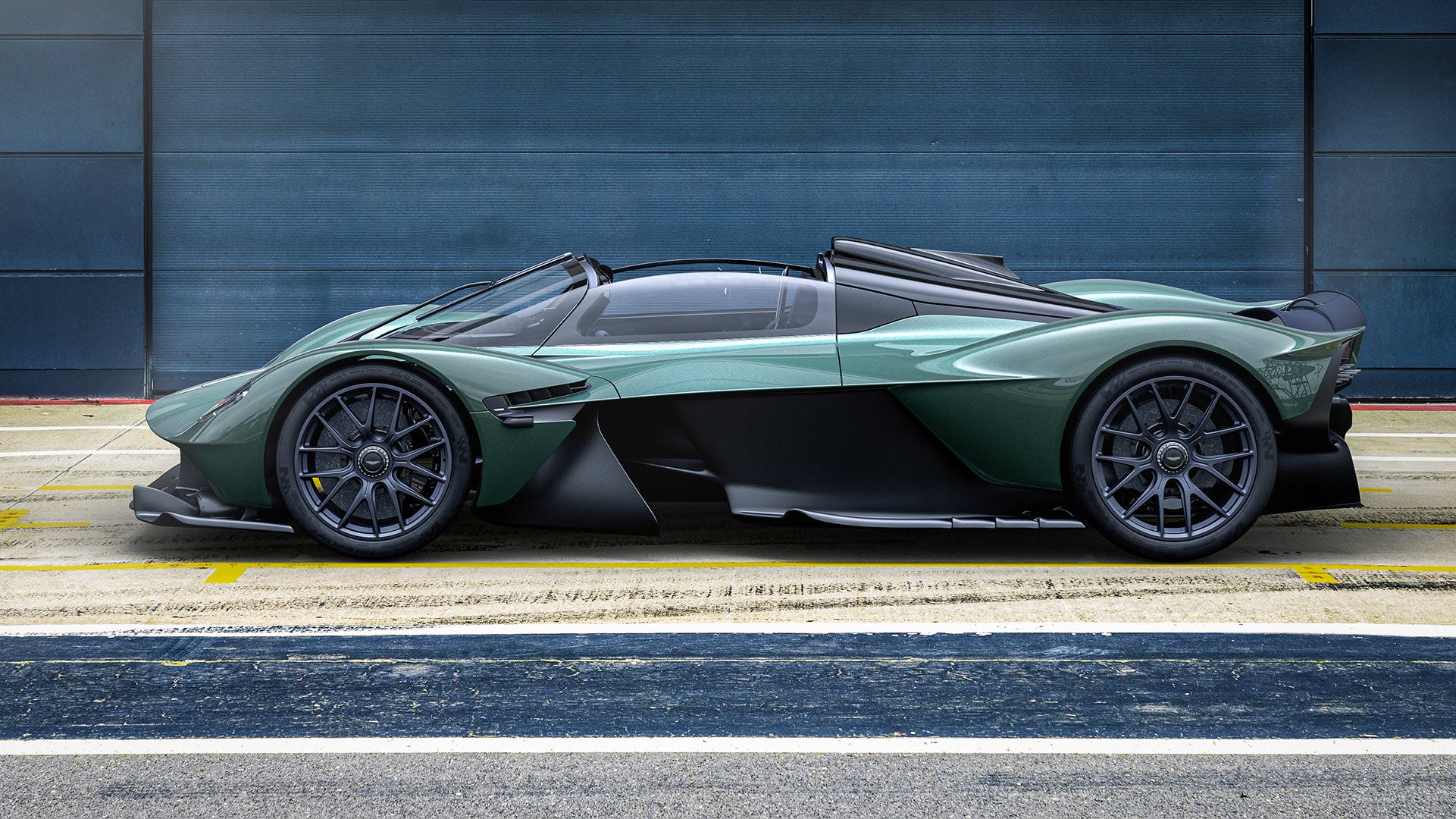 Aston Martin’s fastest convertible to date has been revealed at the 2021 Pebble Beach Concours d’Elegance and it’s electrified. Think of the Aston Martin Valkyrie Spider as the droptop version of the brand’s futuristic hypercar. It promises a more visceral drive since you can take the roof off and experience the elements around you. Like the coupe, the Valkyrie Spider takes learnings from F1 racing and applies it to a road car through Aston Martin’s collaboration with Red Bull Advanced Technologies.

Powering the Aston Martin Valkyrie Spider is the same plug-in hybrid powertrain as the coupe. This couples a 6.5-liter V12 with a 40-kWh battery, an electric motor, and a seven-speed single-clutch automated manual. The result is a total system output of 1,139 hp going through the rear wheels. Aston Martin revised the Valkyrie’s carbon-fiber structure and active chassis and aerodynamics specifically for the Valkyrie Spider.

Like its coupe sibling, the Valkyrie Spider benefits from ultra-lightweight construction and an aerodynamics package with high downforce. The upper body surfaces and lower tub contours follow the full-length Venturi tunnels running through both sides of the vehicle. These openings are key to the Valkyrie Spider being able to generate over 1,400 kg or 3,086 pounds of downforce at 240 km/h (149 mph) without needing to put extra devices that could ruin the open-air experience. Aston Martin also notes that losing the roof didn’t come at the cost of additional weight versus the coupe. With the roof panel removed, the Valkyrie Spider has a top speed of 208 mph. With it on, that goes up to 217 mph.

Inside, you’ll find the same F1-inspired driving position as the Valkyrie coupe. That means you’re sitting low in the chassis with a low hip-to-heel height, a near central seating position, and a six-point harness. A rearview camera and front and rear parking sensors are standard to help the driver maneuver the vehicle.

The removable roof is made out of a central carbon fiber panel and two polycarbonate windows that latch on either side. Aston Martin modified the Valkyrie’s carbon-fiber tub to support the removable roof and the new dihedral doors specific to the convertible that tilts forward. Once you open the doors, you can simply take the roof off and stow it away. Aston Martin’s engineering team will be responsible for implementing these changes and will use simulation tools ahead of building physical prototypes.

“The Aston Martin Valkyrie is the product of incredible innovation and technology, but above all, it has always been about emotion,” said Tobias Moers, CEO of Aston Martin. “With the Valkyrie Spider, we are taking that passion and emotion to the next level. The driving experience promises to be truly sensational. The sound of that 6.5-liter V12 engine revving to over 11,000 rpm with the roof removed is something I cannot wait to hear.”

Red Bull Racing’s chief technical officer, Adrian Newey, noted that turning the Valkyrie into a convertible wasn’t easy. With engineering targets that went beyond any previous road car, keeping the Valkyrie’s performance intact while taking the roof off was a challenge on its own. “Maintaining aerodynamic performance with the roof removed was of paramount importance, likewise keeping any unavoidable weight gains to an absolute minimum whilst maximizing enjoyment for the driver,” added Newey.

All 85 examples of the Aston Martin Valkyrie Spider have been sold and will be made in left- and right-hand drive versions. Aston Martin says that there are more people interested in the car than the production limit. As a result, the brand will allocate them with deliveries starting in 2022. The car will be on display at the 2021 Pebble Beach Concours d’Elegance in Monterey, CA from August 12 to 15 but will be viewable only via invitation.