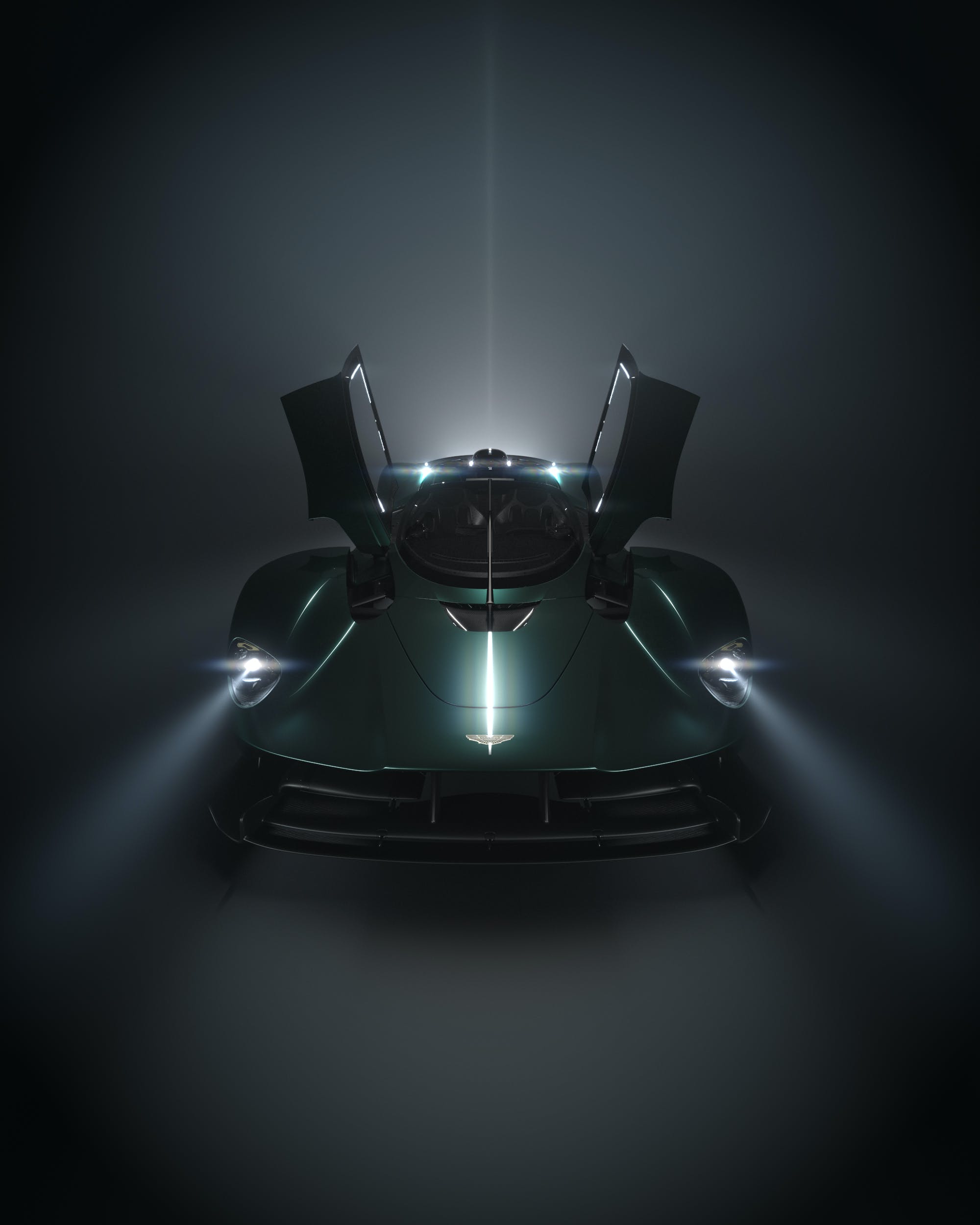 Aston Martin is using the 2021 Pebble Beach Concours D’Elegance to introduce two vehicles. The Valhalla supercar will make its North American debut in Monterey alongside a world debut that appears to be a variant of its electrified hypercar, the Valkyrie. This appears to be a topless variant of Aston’s futuristic-looking mid-engine machine based on the sole teaser photo. The Valkyrie and Valhalla are the first two models to arrive that are part of Aston’s Project Horizon Strategy. These two start the brand’s transition from internal combustion to electrified powertrains. Being hybrids, the Valkyrie and Valhalla represent the midway point before Aston Martin goes all-in on battery-electric propulsion.

Originally known as the AM-RB 001, the Aston Martin Valkyrie is the brand’s first hypercar. It uses a 6.5-liter V12 with a redline of 11,000 rpm coupled to a 40-kWh battery sourced from Rimac, a seven-speed single-clutch automated manual transmission, and an electric motor. In total, the Valkyrie makes 1,160 hp and 664 lb-ft of torque. To maximize aerodynamics, the Valkyrie has a lot of openings and vents and an open underfloor, allowing it to produce up to 4,000 pounds of downforce. A large front splitter and gaps on top of the car also help create more downforce together with roof-mounted air intake. The lightweight alloy wheels were made to optimize airflow around the vehicle. An AMR Pro version takes things up a notch with carbon-reinforced brakes, 18-inch wheels shod with Michelin racing tires, a lighter exhaust system with less noise reduction, a dual-element rear spoiler, an LMP1-type fin, and a larger rear diffuser. The Valkyrie AMR Pro also doesn’t have an infotainment and climate control system. When it was announced, the Valkyrie cost $3 million and was limited to 150 units. Only 25 examples of the Valkyrie AMR Pro were produced and cost $3.5 million. Both variants are sold out.

Limited to 999 units, the Aston Martin Valhalla slots below the Valkyrie and features a body made extensively of carbon fiber and has been optimized for maximum aerodynamics. Power comes from a 4.0-liter twin-turbo V8 coupled to two electric motors, a lithium-ion battery, and an eight-speed dual-clutch automatic transmission made specifically for hybrid applications. The total output is 950 hp and 737 lb-ft. Aston Martin says the Valhalla has a top speed of 217 mph and expects it to lap the Nürburgring in 6:30. Like the Valkyrie, the Valhalla has a carbon fiber body to keep weight down.

The convertible variant of the Aston Martin Valkyrie will likely use the same carbon fiber body and powertrain bits as its coupe and AMR Pro counterparts. Based on the sole teaser released by Aston Martin, it appears the car may not have a roof at all or feature a single removable panel just like you find in the Chevrolet Corvette coupe. The rest of the car appears to have stayed untouched; the butterfly doors are still there and all of the canards and openings have remained too. Like the coupe and AMR Pro, the drop-top Valkyrie will likely be produced in incredibly small numbers and will likely sell out quickly. The Valkyrie convertible will likely be street legal; if Aston Martin decides to make an AMR Pro version of that one, it’ll be a track-only vehicle just like the AMR Pro coupe.

Written by Stefan Ogbac
Follow Author
RELATED ARTICLES
Aston Martin will replace Vantage, DB11 with EVs: Report
Gas-only vehicles sold by Aston Martin after 2030 will be for track use only
Aston Martin DBX to receive a PHEV variant with up to 800 horsepower: Report
Which home charger or Level 2 charger should I buy for my Tesla?
RELATED ARTICLES
JOIN THE EV PULSE NEWSLETTER
Receive weekly updates on each of our electrifying articles.