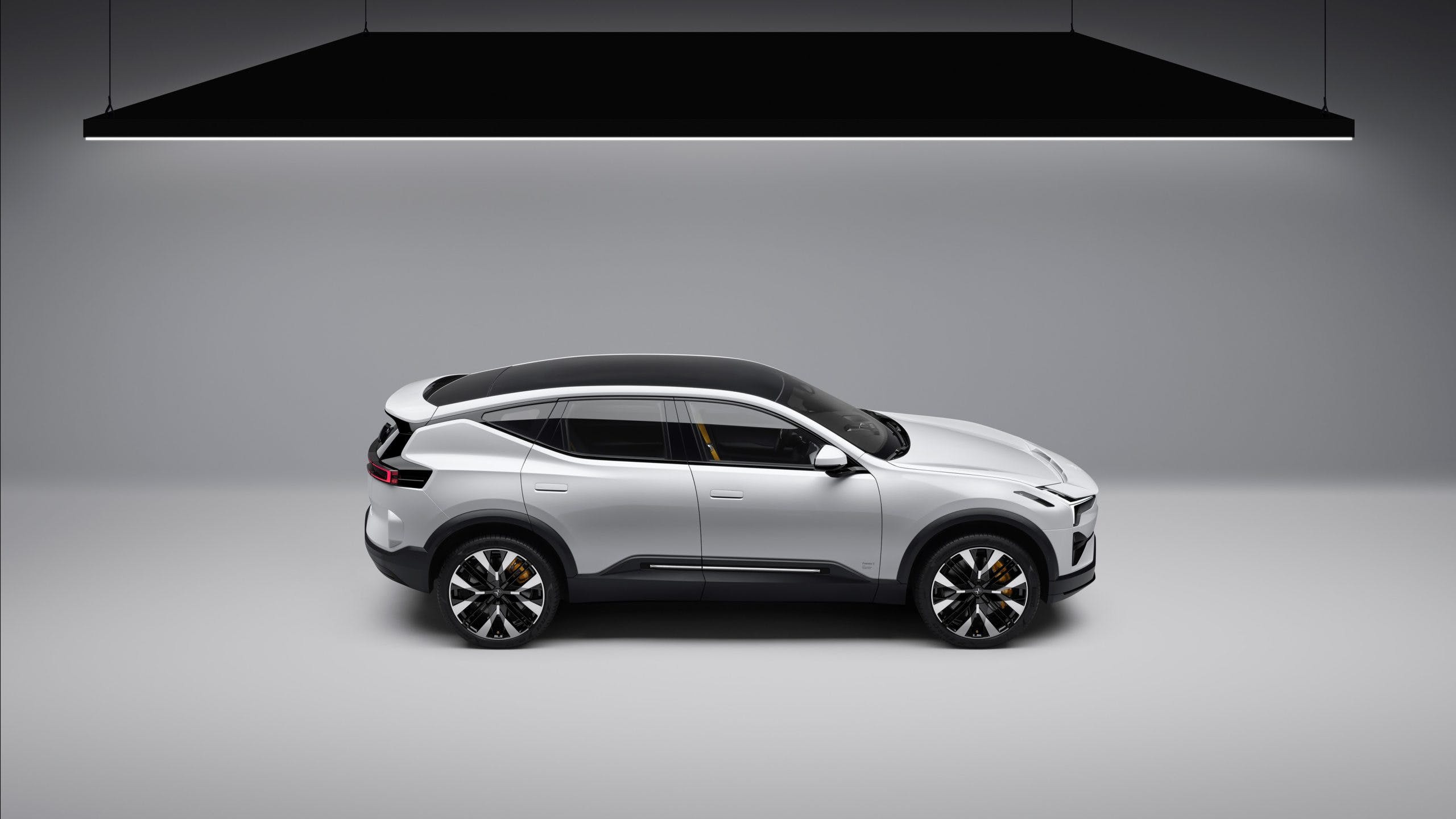 After numerous teasers involving drapes and pixel camouflage, the 2023 Polestar 3 has been shown for the first time completely uncovered. Sporting the same Snow (White) exterior hue the Polestar 2 used as a hero color, the brand’s first SUV is sleek, aerodynamic, and very wagon-like. This is likely due to its low, long roof and nearly vertical hatch area. A roof spoiler only amplifies that since it appears to extend the crossover’s roofline. Traditional door handles have also been ditched for what appear to be pop-out ones that are flush with the vehicle when it’s moving or locked.

Polestar also debuts a new interpretation of the Thor’s Hammer lighting signature. Instead of it being an LED daytime running light, it’s now the headlight cluster and houses the main projectors alongside the DRLs.

The front fascia of the 2023 Polestar 3 deviates from the Polestar 2 sedan because it’s ditched the enclosed grille in favor of a narrow panel housing all of the driver assistance sensors. Over time, the Polestar 3 will eventually offer autonomous driving using LiDAR sensors from Luminar backed by NVIDIA computing power. At launch, the Polestar 3 will be available with a dual-motor powertrain backed by a large battery. However, Polestar didn’t reveal any outputs or capacities. It did say it’s targeting around 600 km or 372 miles on the WLTP cycle, which will likely translate to about 300 miles in the EPA cycle.

This particular vehicle also appears to be equipped with the Performance pack as evident in the Swedish gold seatbelts and brake calipers. Its large alloy wheels are reminiscent of the ones from the Precept and could be wrapped in sticky summer performance tires. The Polestar 3 could also get an air suspension with adaptive dampers instead of the manually adjustable Öhlins dampers found in the Polestar 2.

Polestar also announced you can order the Polestar 3 on the day of its global debut in October. It noted this will only be possible in the SUV’s initial markets, which likely include Europe, China, Canada, and the United States. Production will take place in China and at Volvo Car Group’s South Carolina facility starting in early 2023. Built on Volvo Car Group’s second-generation Scalable Product Architecture (SPA2), the Polestar 3 is the brand’s first SUV and the start of its upcoming product offensive. This vehicle will be closely related to the upcoming Volvo Embla, which will slot above the XC90 and also use the SPA2 platform.

Following the Polestar 3 will be a smaller compact SUV called the Polestar 4. That model is aimed at the likes of the second-generation Porsche Macan EV, Lexus RZ 450e, Genesis Electrified GV70, and the Tesla Model Y. Polestar will use the new Premium Modular Architecture (PMA), a variant of the Sustainable Experience Architecture (SEA, also known as the Scalable Electric Architecture) developed by its parent companies, Volvo Car Group and Geely. The Polestar 4 will have a coupe-like profile and will likely be more aerodynamic, allowing it to travel farther on a single charge.

The final vehicle in Polestar’s product offensive is the Polestar 5, the production version of the Precept show car. It will use an aluminum-intensive version of the SPA2 platform and will be exclusive to the Polestar brand along with the new P10 electric motor, which uses a two-speed gearbox. The latter could appear in the 2023 Polestar 3 but likely with a different calibration and not its highest output of more than 600 hp.