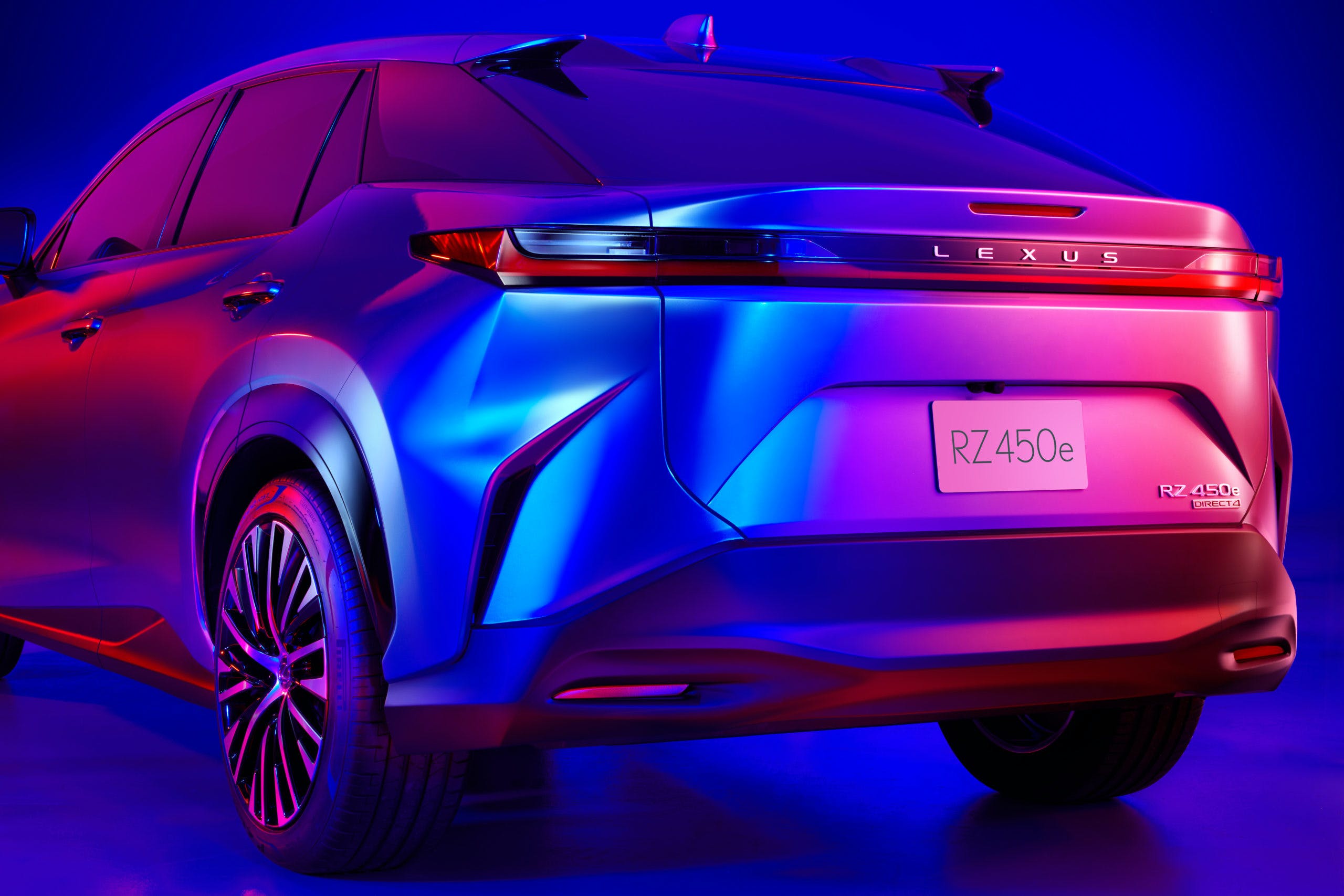 On the same day that Akio Toyoda, President, and CEO of Toyota, revealed the battery-electric vehicle strategy for its two brands, we got our first glimpse of its luxury arm’s first EV. The 2023 Lexus RZ made its first appearance in the presentation, giving us a good look at its exterior design. In a separate release, Lexus gave us a close-up of its first EV, showing off key design details plus its model designation.

Looking closer at the psychedelic teaser images of the 2023 Lexus RZ, you’ll find similarities with Toyota’s bZ4X. The low roofline, angled rear window, and mini duckbill spoiler are similar to its mainstream counterpart. However, this isn’t simply a rebadge because the front end is completely different. Yes, the grille-free look is there but you still get the spindle outline, giving the RZ Lexus’ corporate face. The headlights are also chunkier and integrate the LED daytime running lights within them. On the counterpart of the front fascia, the black inserts below the headlights and grooves carry over from the LF-Z Electrified Concept.

The RZ’s rear is reminiscent of what first appeared on the 2022 NX crossover. You get thin full-width LED taillights and Lexus spelled out in the center. There also appear to be faux vents in the lower part of the rear fascia. Overall, the RZ is reminiscent of the RX, Lexus’ bestselling model. The design cues have been essentially downsized to a compact crossover, giving us a good sense of the brand’s design direction for its future models.

Another key thing to note from the psychedelic images is that Lexus revealed the model nomenclature. The RZ 450e will be the first iteration of the all-electric crossover and based on its numerical designation, it will have more power than the bZ4X. In other Lexus vehicles, the 450 number is used on high-powered variants, specifically hybrids. The RX 450h makes a combined 308 hp from a 3.5-liter V6 coupled to three electric motors, a nickel-metal-hydride battery, and a planetary gear set. Its compact sibling, the NX is the latest to get the 450h label thanks to it sharing the same 302-hp plug-in hybrid system as the RAV4 Prime. That couples a 2.5-liter four-cylinder with three electric motors, an 18.1-kWh lithium-ion battery, and a planetary gear set. The NX is also able to travel 37 miles in all-electric mode or up to 550 miles when driven as a hybrid.

The biggest giveaway that the RZ 450e isn’t a rebadged bZ4X is the DIRECT4 badge on the tailgate. What does that imply? It means the crossover has the company’s drive control technology for electrified vehicles. The system controls torque delivery from the front and rear electric motors and braking force at all four wheels, enabling it to adapt to the driver. DIRECT4 will also improve performance by changing power and torque distribution. This means Lexus can bias the power toward to rear, front, or keep it 50/50 depending on traction requirements.

When it goes on sale next year, the 2023 Lexus RZ will start the brand’s move toward the full electrification of its lineup. By 2030, Lexus will be fully electrified with battery-electric versions of every vehicle it sells. As part of Toyota’s broader electrification offensive, at least 13 new all-electric models will join the Lexus lineup.