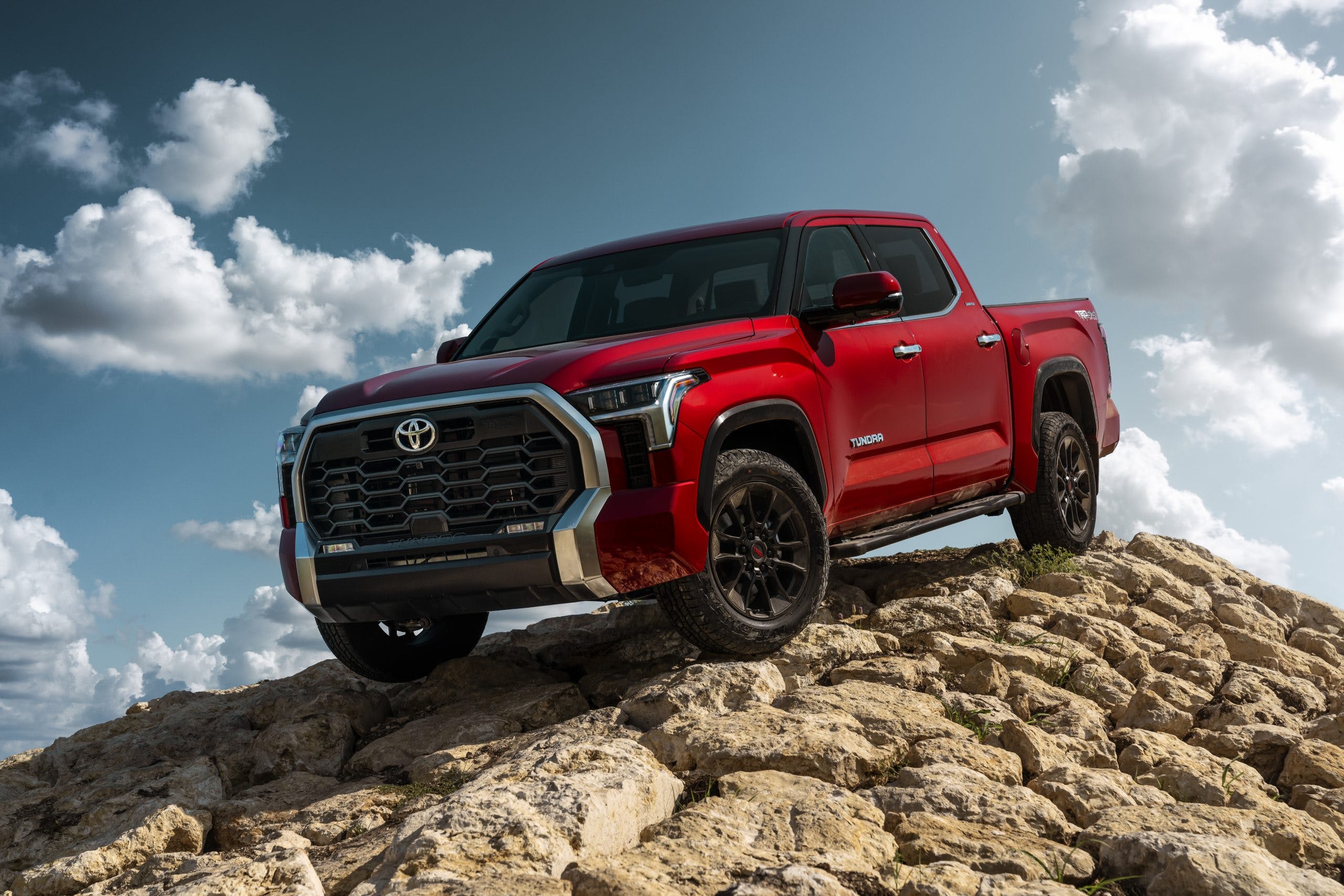 The 2022 Toyota Tundra has finally arrived and it has an imposing new mug. Each trim gets a different look but there’s no mistaking this truck for anything else. You get a massive, imposing grille and angular headlights with T-shaped daytime running lights. In the rear, you get vertical taillights and a stamped tailgate. Like every truck, the Tundra is boxy and rugged but it also has a techie aura thanks to its new look.

Perhaps the biggest news on the 2022 Toyota Tundra is the new I-Force Max powertrain. This is the first hybrid system to find its way into a Toyota pickup and is a different setup from what you find in FWD-based models. The new 3.5-liter twin-turbo V6 and 10-speed automatic transmission are coupled with an electric motor and a nickel-metal-hydride battery mounted under the rear seats. Toyota sandwiches the electric motor between the engine and gearbox. In total, the I-Force Max hybrid system makes 437 hp and 583 lb-ft of torque, which is 7 hp and 13 lb-ft more than its direct competitor, the Ford F-150 Hybrid. For city driving up to 18 mph, the electric motor does most of the propulsion. In Sport or Sport+ modes, it helps the Tundra get off the line and accelerate quicker.

Another big change in the new Tundra is the addition of a multilink rear suspension. Toyota says this was done to improve stability, ride comfort, and handling. It also increases the truck’s towing capacity by 17.6 percent, topping out at 12,000 pounds depending on the powertrain, cab, bed length, and drivetrain configuration. The payload also increases to a maximum of 1,940 pounds or 11 percent more than the outgoing truck. In front, the Tundra now gets a control-arm suspension layout with a caster trail that has been increased from 1.0 to 1.34 inches for added stability. For reduced body roll, the roll steer has been reduced by 25 percent while the roll height center increases to 6.0 inches from around 4.0 inches in the outgoing model.

TRD Pro models get 2.5-inch Fox shocks and a 1.1-inch lift in front. Additional components on the most rugged Tundra include an aluminum TRD skid plate, a TRD front anti-roll bar, red suspension components, a locking differential, and aluminum shocks with piggyback reservoirs that house additional oil to improve off-road performance without sacrificing on-road comfort. CRAWL Control, which is essentially an off-road cruise control, is also standard on the TRD Pro and allows the driver to focus on steering. Multi-Terrain Select allows you to tailor the truck’s nannies with the type of terrain you’re in. Certain Tundra models will also be available with an air suspension in the rear with three height levels. For the first time, Toyota will offer its adaptive variable suspension on the Tundra, which helps ride and handling.

The 2022 Tundra is the first Toyota model to get the new multimedia system. Depending on the trim, you’ll find either an 8.0- or a 14.0-inch touch screen on the dash with wireless Apple CarPlay and Android Auto compatibility. This new interface features over-the-air (OTA) update capability and has a virtual assistant. Higher trims will complement the larger main display with a 12.3-inch digital cluster replacing the standard 4.1-inch unit.

In addition to a Tow/Haul mode, the new Tundra takes advantage of its new tech features to make towing and hauling payload easier. In the case of the I-Force Max hybrid system, the electric motor is constantly active for immediate responses. However, the automatic start/stop system is deactivated to maximize performance. In addition to showing the surround-view camera, the big display also houses the new multi-terrain monitor, which gives you different angles to help you see obstacles around the truck. There’s also a new Trailer Back Guidance to help you line the Tundra up accurately with your trailer. When equipped with the available air suspension, the rear can level itself with the trailer.

When it goes on sale before the end of the year, the 2022 Toyota Tundra will be available in either double or crew cab flavors. You’ll have a choice between a 5.5-, 6.5- or 8.1-foot bed depending on the cab you pick. Like the smaller Tacoma, the Tundra now uses a composite bed with reinforced aluminum cross members, which is 20 percent lighter than the old truck. The third-generation Tundra is also the second vehicle on the TNGA-F platform, which first appeared in the global market Land Cruiser. Expect more vehicles to follow on the architecture when the next-generation Tacoma, Sequoia, and 4Runner move to it in the coming years.