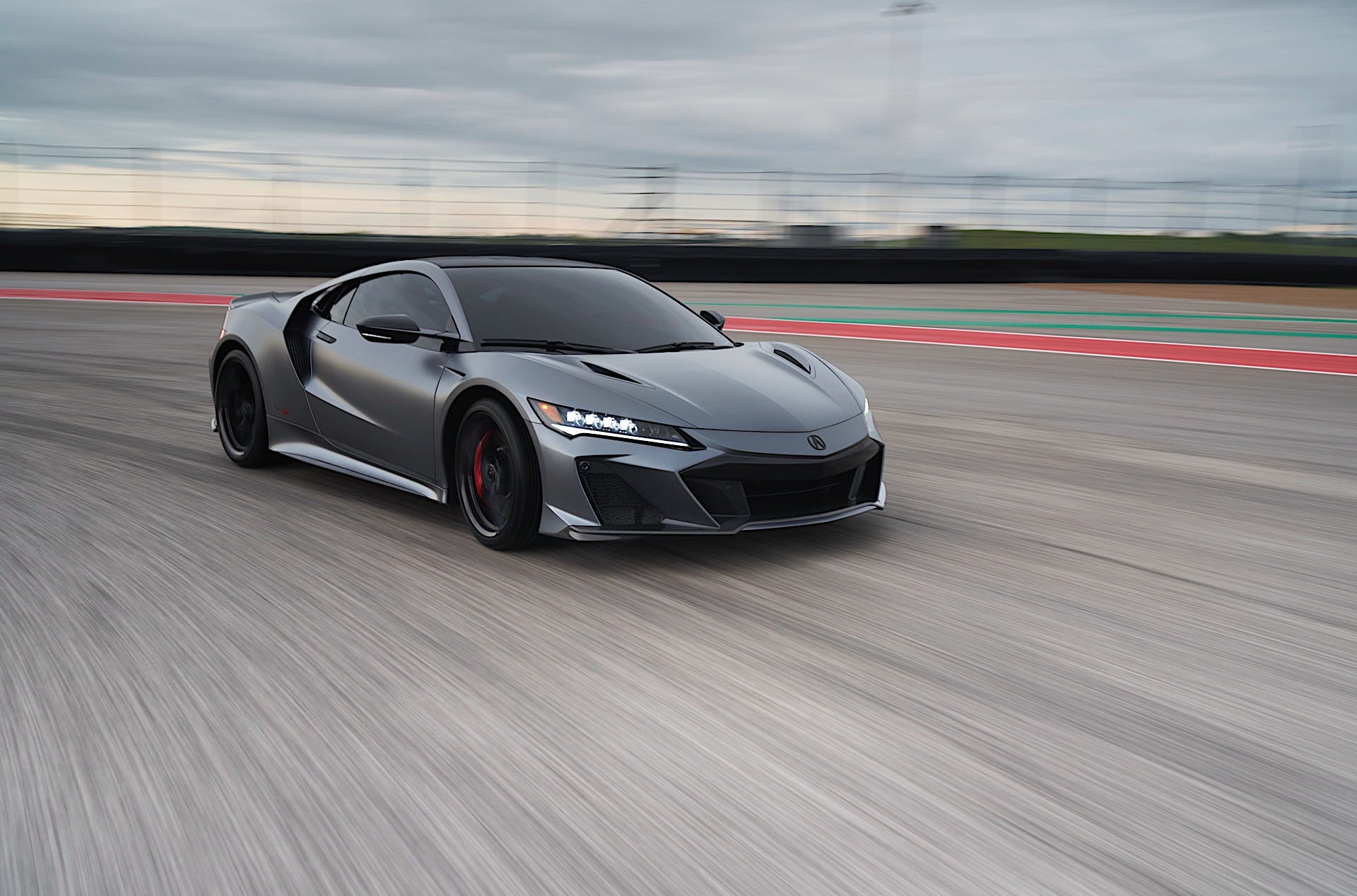 The 2022 Acura NSX Type S has finally been revealed at the 2021 Pebble Beach Concours d’Elegance. With production limited to 350 units and 300 of them staying in the U.S., this iteration of the second-generation car will be one of the rarest. You’ll be able to tell the NSX Type S apart from the standard car thanks to the larger openings in its lower front fascia for better cooling and a carbon fiber rear diffuser. The car also gets a carbon-fiber roof and a carbon fiber rear spoiler. Acura widened the NSX Type S’s front and rear track by 0.4 and 0.8 inches respectively to improve its handling and stance.

Under all the functional cosmetic changes, the 2022 Acura NSX Type S gets some significant upgrades. The hybrid powertrain, which combines a 3.5-liter twin-turbo V6, three electric motors, a lithium-ion battery, and a nine-speed dual-clutch automatic gearbox, has been massaged to 600 hp and 492 lb-ft of torque. That’s an increase of 27 hp and 16 lb-ft, which Acura says is enough to help the NSX Type S lap the Suzuka circuit in Japan 2.0 seconds quicker than the standard car.

Acura added new fuel injectors, new intercoolers, and turbochargers from the NSX GT3 Evo with a higher boost. The gear ratio for the two front electric motors has been lowered to 8.050:1 from 10.382:1. Usable battery capacity and output have been increased by 20 and 10 percent respectively, enabling longer EV mode range and enhanced performance from the SH-AWD system. The transmission has also been reworked to shift faster and now has a Rapid Downshift mode, allowing it to skip to the lowest possible gear by holding down the left paddle shifter for 0.6 seconds. In Sport and Sport+ modes, the clutch packs engage 50 percent quicker, improving shift speeds. Acura also made changes to the transmission’s behavior in Track mode, allowing it to downshift sooner thanks to a rev threshold that’s been increased by 1,500 rpm.

Suspension tweaks have been made to make the NSX Type S sharper without sacrificing its daily usability. In Sport mode, the car has less body roll and dive, and better stability. The SH-AWD system has also been reworked to give you yaw moments for a sharper, more responsive feel in Sport mode. That’s further amplified in Sport+ mode because the electric motors’ torque vectoring capabilities are used to provide quicker turn-in. Staggered tires on 19-inch front and 20-inch rear alloy wheels wrapped in bespoke Pirelli P Zero performance tires further improve the NSX Type S’s handling and stability.

The NSX Type S will be the first Acura to get the Gotham Gray matte exterior color. However, only 70 examples will be built in that color. Inside, you’ll find the Type S logo embroidered on the glovebox, NSX logos on the seats, and an Alcantara headliner. You’ll also be able to pick between Alcantara/leather or full semi-aniline leather upholsteries. The former is available in three colors while the latter is only offered in Ebony and Red.

Pricing for the 2022 Acura NSX Type S starts at $171,495. There are several cosmetic options just like the standard car but the standout is the Lightweight package. This adds carbon-ceramic brakes, a carbon-fiber engine cover, carbon fiber steering wheel accents, and a carbon fiber gauge cluster cover. In total, the Lightweight package cuts the NSX Type S’s weight by 57.8 pounds but it will increase the car’s price by a cool $13,000. Acura is now taking orders for the NSX Type S and will be manufactured at Honda’s Performance Manufacturing Center in Ohio.