Tesla Model Y Standard Range vs. Volkswagen ID.4: Which one should you get? 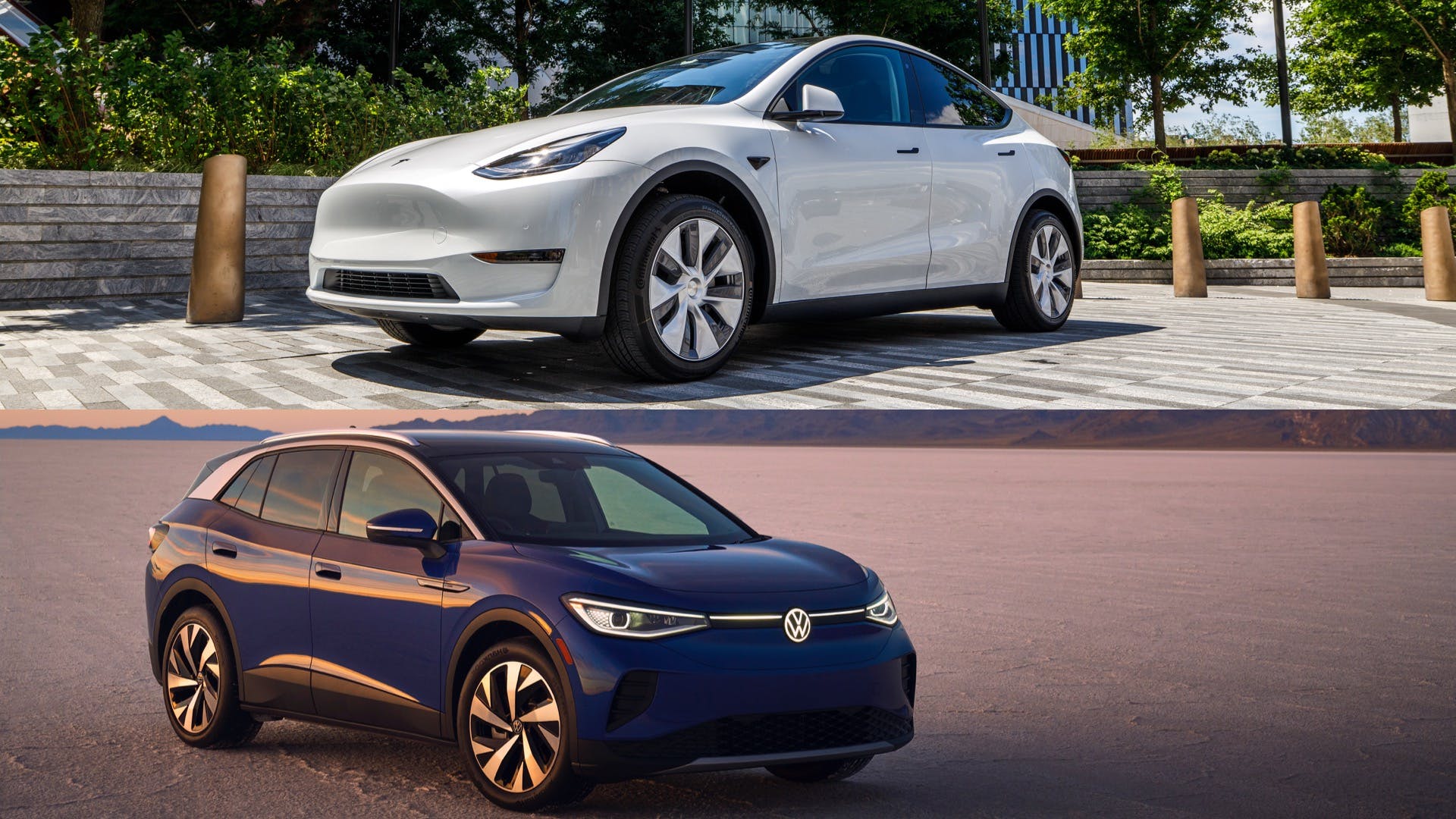 Even in the battery electric vehicle space, utility vehicles are the dominant body style. As the auto industry transitions toward electrification, crossovers will remain popular as consumer demand for them remains at an all-time high.

To meet different needs and requirements, automakers have filled nearly every segment with SUVs, meaning there’s one to fit every lifestyle.

Case in point the Tesla Model Y and Volkswagen ID.4, two compact all-electric crossovers with over 200 miles of range and lots of utility without needing to go to a larger vehicle. Both are compelling to first-time EV adopters but which one is right for you?

The Tesla Model Y and Volkswagen ID.4 couldn’t be more different in looks. The former retains the aerodynamic wedge shape that’s defined every four-door Tesla model while the latter is more upright, giving it the look of a slightly raised hatchback or wagon. Neither one has a traditional grille since there’s no need for extensive engine cooling. However, the Volkswagen looks more like a traditional crossover thanks to its upright greenhouse. You get a traditional liftgate in the ID.4, too, instead of a big lift back-style one in the Model Y.

Minimalism is the key theme in both the Tesla Model Y and Volkswagen ID.4. Both vehicles have tastefully designed interiors that blend simplicity and cutting-edge technology seamlessly. There’s room for five passengers to sit comfortably in the Model Y and ID.4, making it a practical choice for a compact-sized family car. You can pay $3,000 to add a third row in the Tesla but we doubt it’ll be useful for frequent use by adults. Between the fast-descending roofline and the Model Y’s tidier exterior dimensions, the third row should be treated more as emergency jump seats for kids.

Volkswagen doesn’t try to squeeze a third row in the back of the ID.4. Instead, you get a nicely shaped interior, giving you plenty of usable space for your cargo. There is even a ski pass-through and a wide hatch opening to maximize practicality and flexibility.

Tesla continues to offer some of the most advanced driver assistance technologies. Autopilot, which is Tesla’s semi-autonomous assist, is standard on the Model Y even on the Standard Range. You can upgrade the system to add a summon feature, automatic lane change, and the Navigate on Autopilot capability if you pay a cool $10,000 extra.

Volkswagen’s IQ. Drive suite of driver assistance features is standard on the ID.4. That adds all the collision prevention tech you expect plus lane centering, traffic jam assist, and Travel Assist, a hands-on semi-autonomous system that helps you drive the vehicle via enhanced steering assist in combination with adaptive cruise control.

On the infotainment front, the Tesla Model Y houses everything on a 15.0-inch touch screen. Everything from your vehicle settings to multimedia options is all within that sole display. However, that gives the interface a significant learning curve, meaning you’ll need to take some time to get to know how to use everything and having to dig through submenus to get to what you need.

In comparison, the Volkswagen ID.4 features a more familiar layout for its infotainment system. You get a 10.0- or 12.0-inch tablet-style touch screen on the dash and an available 5.3-inch digital gauge cluster replacing the analog one on higher trims. Volkswagen also kept physical and capacitive buttons on the dash and steering wheel, which should keep things easier to use versus Tesla’s interface.

Both the Tesla Model Y and Volkswagen ID.4 can travel similar distances in their single-motor versions. The Model Y is rated at 244 miles per charge while the ID.4 is good for 250 miles in the Pro or First Edition models. Tesla also offers more powerful long-range, dual-motor variants with over 300 miles of range and a high-performance version. Sometime in 2021, Volkswagen will add a 302-hp dual-motor version of the ID.4. However, that could have less range than the single-motor version despite using the same 82-kWh lithium-ion battery.

Tesla’s supercharger network makes living with a Model Y easier because you’re spending less time charging the vehicle. In 15 minutes, you can gain 162 miles, meaning you’ll be able to get back on the road sooner. The Volkswagen ID.4, on the other hand, can charge to 80 percent using a level 3 charger in 38 minutes. An 11.0-kW charger will allow you to charge to 100 percent using a level 2 or 240-volt charger in 7.5 hours.

The Tesla Model Y and Volkswagen ID.4 are priced right on top of each other at $41,990 for the former and $39,995 for the latter. Dual-motor AWD variants of the Volkswagen ID.4 adds $3,680 to the sticker price. All told, a loaded AWD ID.4 will cost you just under $50,000. The Volkswagen ID.4 also qualifies for up to $7,500 in federal tax credits along with local and state incentives.

If you opt for the extra-cost colors and interiors, larger alloy wheels, and upgraded Autopilot semi-autonomous driving assistance feature, the Model Y Standard Range will cost you in the mid-$50,000 range. However, Tesla vehicles are no longer eligible for federal tax credits, only local or state incentives.

Get the Tesla Model Y Standard Range if you want:

Get the Volkswagen ID.4 if you want: