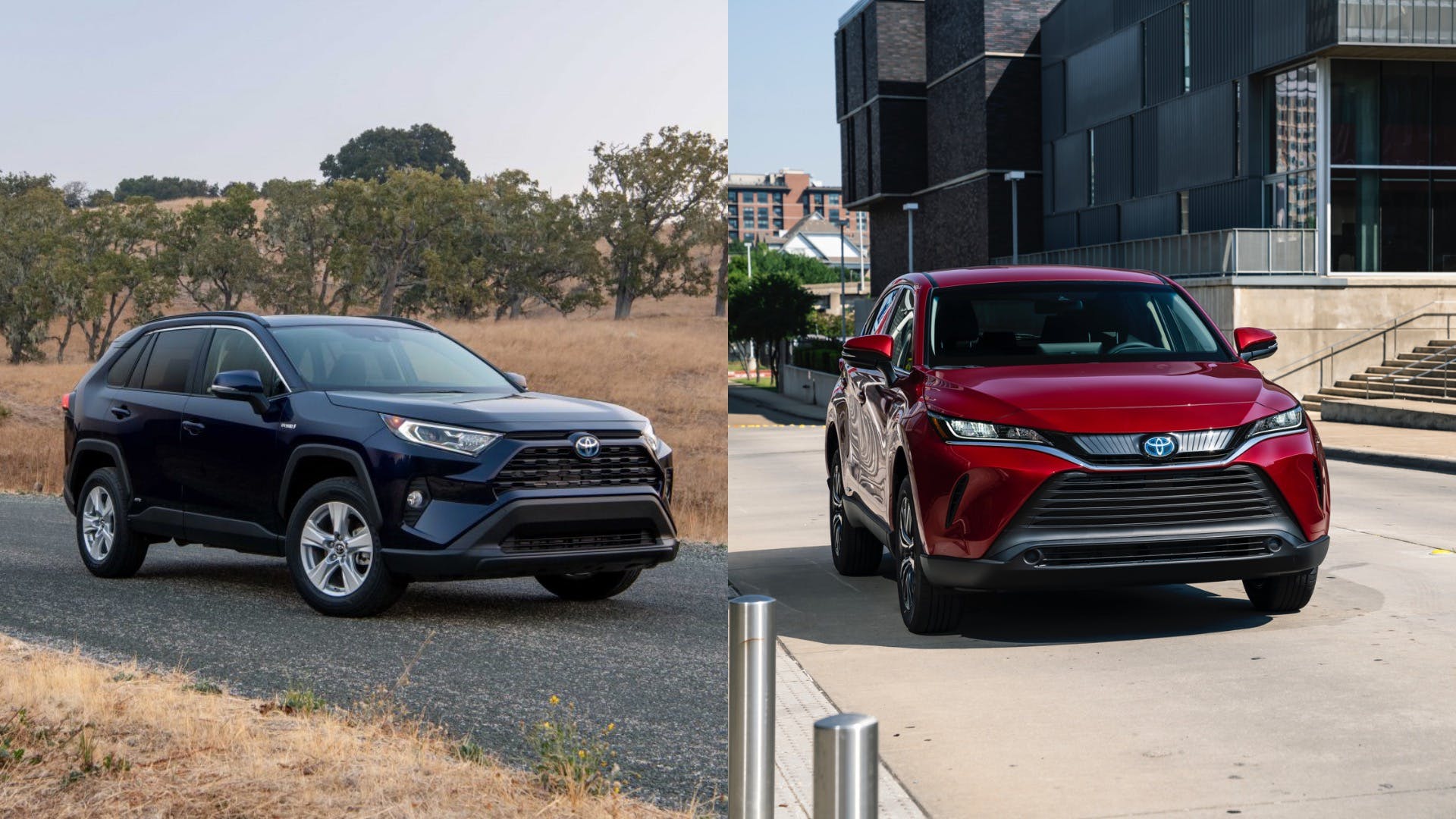 If you’re looking for a fuel-efficient electrified crossover, there’s a wealth of choice out there, especially in the compact and mid-size segments. Toyota alone has a hybrid for every need and if yours only requires two rows, you can choose between the RAV4 Hybrid or the Venza. Which one to get? How does each one fair? Let’s find out.

The Toyota RAV4 Hybrid and Venza couldn’t be more different on the outside. Although they share the same TNGA-K platform, you wouldn’t notice it unless you looked under the skin. The RAV4 is rugged, boxy, and utilitarian while the Venza focuses more on style and an upscale look. You get cool design cues in the latter like full-width LED taillights and a sweeping roofline that gives it a low-slung appearance. Each one also has a unique take on the Toyota family face with the RAV4 continuing the angular theme with diamond-like LED headlights and a trapezoidal grille. In comparison, the Venza highlights its curvaceousness with soft lines, a grille with rounded edges, and thin LED headlights.

When you jump inside, the differences between the RAV4 and Venza become apparent. The RAV4’s upright greenhouse provides excellent space for people and cargo, and good visibility. You get neat small-item storage solutions, too, like a tray integrated into the dash. Despite having a slightly larger footprint, the Venza has less cargo space than the RAV4 because of the rear window’s angle, and the sole cubby under the dash is on the small side.

Toyota further distinguishes the Venza Lexus-like fit and finish, and extensive use of soft-touch materials and lots of padded surfaces. While the RAV4’s build quality is solid, too, it veers more toward the utilitarian end, giving it a sturdy feel that can withstand abuse from children and big kid toys. The Venza’s cabin is quieter, too, thanks to additional sound deadening versus the RAV4.

Both the RAV4 Hybrid and Venza use Toyota’s latest infotainment system. The Venza is available with an 8.0- or 12.3-inch touch screen while the RAV4 is offered with a 7.0- or 8.0-inch unit. Apple CarPlay and Android Auto compatibility are standard on both vehicles. The version found in the Venza with the larger 12.3-inch touch screen has quicker responses than the older version in the RAV4. However, the controls could be better because certain functions like the climate controls aren’t grouped, requiring you to go into the display to access things like Eco mode and the recirculate capability. You also get haptic feedback buttons in the Venza, which can be distracting to use, instead of the physical knobs and buttons in the RAV4.

The Toyota Safety Sense 2.0 driver assistance suite is standard on the RAV4 Hybrid and Venza. In both cars, the suite works well but it’s obvious that the calibration is on the conservative side. Adaptive cruise control’s distancing component leaves more room between you and the vehicle ahead than you’d expect and isn’t as proactive with closing gaps and backing off if it’s too close. In traffic, it waits a few seconds after the car in front moves before following suit and brakes early when it’s time to slow down.

Toyota employs its 2.5-liter four-cylinder-based four-cylinder hybrid system in the RAV4 Hybrid and Venza. This couples the engine with an electric motor, a lithium-ion battery, and a planetary gear set. Both also get AWD standard courtesy on a second electric drive motor mounted on the rear axle. The combined output in the RAV4 Hybrid and Venza is 219 hp. You get smooth power delivery and never feel lacking when you point the crossovers up a hill, load it with people and gear, or execute highway passing maneuvers.

Chassis tuning is where the RAV4 Hybrid and Venza can be further distinguished. Neither crossover is sporty but both their road manners distinguish them from each other. The RAV4 is soft, cushy, and can be a little floaty over big bumps and road imperfections. In comparison, the Venza is more composed, featuring better body control and tighter steering, giving it a more composed feel. You don’t lose out on comfort either because the Venza is supremely comfortable just like the RAV4.

The Toyota RAV4 Hybrid is available in five grades with the base LE trim starting at $29,975. An XSE trim with a sport-tuned suspension is exclusive to the RAV4 Hybrid and also gets cosmetic tweaks like a black contrasting roof, black 18-inch alloy wheels, and black side mirror covers. When loaded with every feature available from the factory, the RAV4 Hybrid can cost over $40,000.

Available in three grades, the Venza starts at $33,745 for the base LE model. The most expensive Limited trim can be had with similar features as the RAV4 Hybrid but will cost you a little more at around $43,100. The Venza has one standout feature: The Star Gaze panoramic sunroof, which can change its opacity to cut out the sun.

Get the Toyota RAV4 Hybrid if you want:

Get the Toyota Venza if you want: