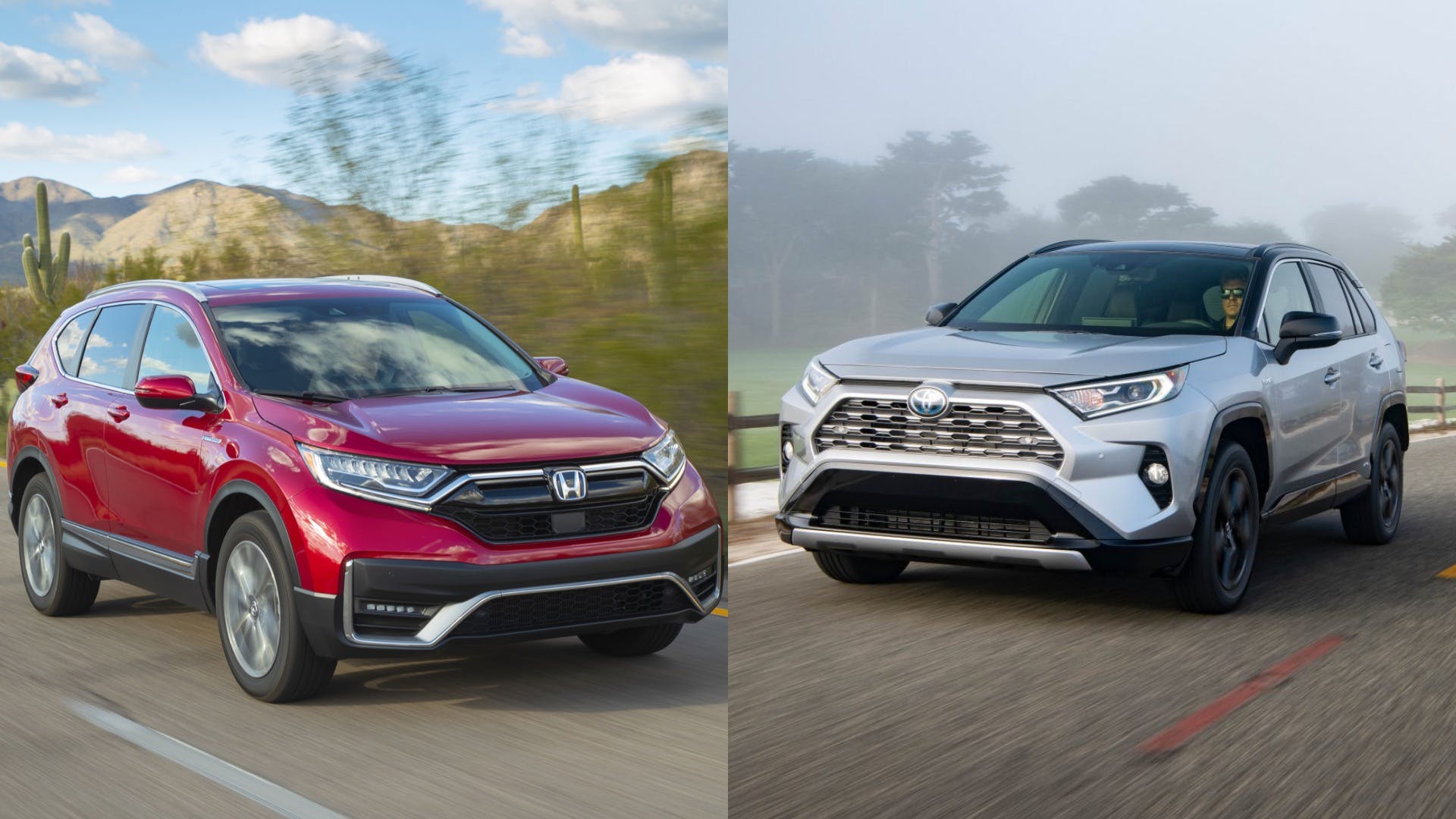 The 2021 Honda CR-V and 2021 Toyota RAV4 are the bestselling models for their respective manufacturers. Consumers crave both crossovers for their practicality and reputation for reliability, both of which make them more appealing. However, both couldn’t be more different in approach as Honda and Toyota worked hard to make their respective compact crossovers stand out in a highly competitive segment. The question is, which one is right for you?

If you’re looking for a more traditional, carlike look, the 2021 Honda CR-V Hybrid has that. Although it has an upright greenhouse and a nearly vertical hatch, the CR-V veers closer to the car side of the spectrum. Even with the black cladding, the Honda doesn’t look very rugged. The silver trim on the lower front fascia, doors, and grille further adds a more refined appearance.

The 2021 Toyota RAV4 Hybrid, on the other hand, channels its larger siblings but in a compact package. Angled headlights, a grille reminiscent of the one in the 4Runner, and a boxier shape all add to the rugged good looks. Squared wheel arches, taillight clusters shaped like the headlights, a floating roof motif, and an angled rear window complete the RAV4 Hybrid’s more outdoorsy appearance.

Jump inside and the differences between the RAV4 and CR-V continue. While both have interiors that use extensive soft-touch materials and padding, the atmosphere couldn’t be more different. The RAV4 Hybrid feels utilitarian complete with cool patterns in the cupholders, big knobs for the climate controls, and lots of additional cubbies. In comparison, the CR-V Hybrid is more upscale; everything feels nice and tactile. The smooth textures make the cabin feel more expensive than it actually is and it has a reconfigurable center console for additional storage.

Quite possibly the biggest difference between the two crossovers is in sound insulation. The CR-V’s cabin stays nice and hushed even on the highway, adding to the upscale sensations you get when you’re driving. In comparison, you get a lot of wind noise in the RAV4. At highway speeds, you hear a lot of buffeting coming from the A-pillars. There’s also a bit more road and tire noise when going over poorly maintained surfaces.

Both the CR-V and RAV4 have generous space for four passengers or five in a pinch. A flat floor gives rear passengers lots of foot room. With all seats up, the RAV4 has more cargo space at 37.5- to 37.6 cubic feet versus the CR-V’s 33.2 cubic feet. The latter’s battery raises the floor slightly since it’s mounted under the cargo area. In comparison, the RAV4’s battery is positioned under the rear seats, preserving interior volume. With the second row folded, cargo capacity is similar with the CR-V Hybrid checking in at 68.7 cubic feet versus the RAV4 Hybrid’s 69.8 cubic feet.

Neither the CR-V nor the RAV4 has the newest infotainment systems. The Honda is only available with a 7.0-inch touch screen while the Toyota is offered with either a 7.0- or 8.0-inch unit depending on the trim level. Response times are slow for both interfaces and the graphics are grainy on both, especially the maps for the built-in navigation. At least the menu layout is simple and easy to navigate. You can upgrade the standard audio systems to a nine-speaker unbranded unit in the Honda or a JBL one with 11 speakers in the Toyota. The latter is the better unit because it covers the cabin in sound more evenly.

Both the Honda CR-V and Toyota RAV4 get a full suite of driver assistance features as standard equipment. Although they work well and don’t get overly intrusive, Honda’s lane-keeping assist is more proactive with its corrections when you start to drift. Adaptive cruise control is less conservatively tuned compared to Toyota’s and does a better job keeping enough space between you and the vehicle ahead without leaving so much room that someone else can cut you off. Toyota’s system also slows down sooner when traffic ahead does so.

The way both crossovers drive is quite distinct; the Toyota RAV4 Hybrid’s suspension is tuned more for comfort, resulting in a cushy ride. It does a great job absorbing road imperfections and keeping impacts out of the passenger cabin. Slow but accurate steering allows you to place the RAV4 on the road quite easily; unfortunately, it always drives big and doesn’t shrink around you. You also get noticeable amounts of body roll through turns.

In comparison, the Honda CR-V Hybrid handles better; there’s excellent body control, allowing the crossover to drive smaller than it looks. You don’t sacrifice ride comfort either because the CR-V absorbs harsh impacts nearly as well as the RAV4 despite having a slightly tighter suspension calibration. Its steering is also accurate but feels more connected, giving you a sense of what the front wheels are doing.

Toyota’s hybrid system is one of the smoothest and the RAV4’s unit is no exception. It takes a 2.5-liter four-cylinder and pairs it with two electric drive motors, a lithium-ion battery, and a planetary gear set for a combined output of 219 hp. Thanks to the instant power delivery from the electric motors, you get generous power when you put your foot down on the accelerator. The lack of a mechanical connection with the rear wheels makes the RAV4 Hybrid feel more like an FWD vehicle until you need the extra traction when the rear electric drive motor engages.

Honda takes a different approach with its hybrid powertrains, forgoing a transmission in favor of a direct drive setup. In the CR-V, a 2.0-liter four-cylinder gets coupled to two electric motors and a lithium-ion battery, resulting in 212 hp and 232 lb-ft of torque combined. The way it drives is different because the system relies extensively on the electric motor for motivation during most driving situations. The gas engine assists mainly during highway driving and hard acceleration. As a result, the CR-V Hybrid feels more like an electric vehicle with a backup plan in most conditions, and thanks to the instant torque, you’re never wanting for power. Unlike the RAV4 Hybrid, the CR-V Hybrid uses a mechanical AWD system. That results in a more stable sensation when you’re driving because all four wheels are able to get power up when needed.

Transitions from regenerative to mechanical braking are seamless in both crossovers. That means you’re not going jerk your passengers around in case you have to suddenly hit the brakes. The Honda CR-V Hybrid gives you five levels of regenerative braking (0 to 4), allowing for some degree of one-pedal driving.

The 2021 Honda CR-V Hybrid starts at $31,735 for the base EX trim. That’s $4,310 more than the 2021 Toyota RAV4 Hybrid, which starts at $27,425 for the least expensive LE grade. Honda gives you more standard features like 18-inch alloy wheels, heated front seats, blind-spot monitoring, rear cross-traffic alert, and dual-zone climate control. You’ll need to go up to the XLE or XLE Premium to get those features on the RAV4 Hybrid. At the top of the range, the CR-V Hybrid Touring checks in just under $38,000. Load up a RAV4 Hybrid and you’ll easily crest $40,000. However, Toyota also offers extras like ventilated front seats, a larger main display, and heated rear seats on the RAV4 Hybrid.

The 2021 Honda CR-V Hybrid and 2021 Toyota RAV4 Hybrid offer two unique approaches to the compact crossover. Toyota emphasizes comfort while Honda has a more well-rounded approach, allowing it to give you more for your money. That doesn’t mean the Toyota is a bad option; it’s still has a lot to offer and gives you a great blend of power and efficiency to go with its cushiness, rugged character, and extra creature comforts.