2021 Chrysler Pacifica Hybrid vs. 2021 Toyota Sienna: Which hybrid minivan should be in your garage? 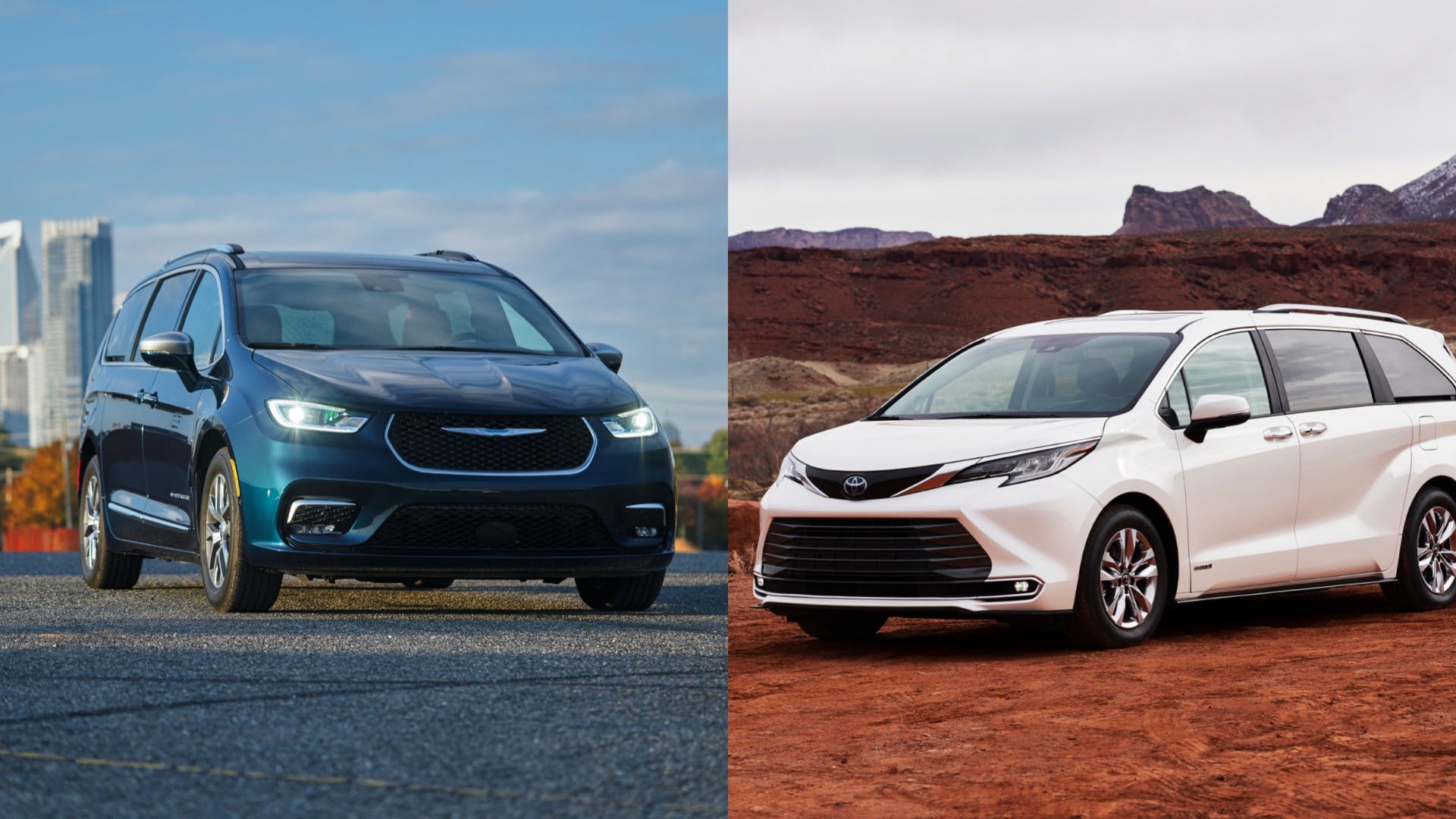 Families searching for the most space but want efficiency on top of that, you have two minivans to choose from: the Chrysler Pacifica Hybrid and the Toyota Sienna. These are currently the most efficient vehicles in their class, giving you 30 mpg combined or more on the EPA cycle. You may be wondering which one is right for you. Here’s a breakdown to help you decide between these two formidable competitors.

When it comes to looks, these two minivans are nearly opposites. The Chrysler Pacifica sports a more traditional look with lots of circular cues and a regular-sized grille flanked by oval headlights. The Pacifica’s rear end is also more upright and features full-width LED taillights. From the side, two character lines connect the front and rear, giving the Pacifica a clean profile.

The Sienna dons Toyota’s latest design language complete with a massive grille in front and thin curved LED headlights. In the back, there’s a cool duckbill-like spoiler just below the rear window and taillights that curve down similar to the ones found in the Toyota Camry. As with most modern Toyotas, there are angles galore in the Sienna and it’s most obvious on the side with the character lines creating cool interplays between light and shadow.

Both the Sienna and Pacifica have roomy interiors packing a lot of clever storage spaces, comfortable seating for up to eight, and third rows that fold easily. However, the Pacifica takes the lead because you can remove the middle seats. You can’t do that in the Sienna because Toyota put the side air bags in them.

The Pinnacle trim feels like a proper luxury minivan because everything you touch is either super soft, thickly padded, or covered in quilted Nappa leather upholstery. While there is less padding in the Sienna, the quality is nearly as good because there are barely any hard bits in the cabin.

You get softer seat cushions in the Sienna while the Pacifica’s is firmer. Both have supportive yet comfortable seats, meaning everyone will be comfortable on long drives. The three-tone black-brown-white motif adds to the cabin’s calm, relaxing atmosphere. On the road, the Pacifica is quieter and better insulated while the Sienna has a lot of wind noise at highway speeds.

Chrysler continues to lead when it comes to tech features in the minivan segment thanks to the Uconnect 5 interface. Featuring a responsive10.1-inch touch screen with a logical menu layout and wireless Apple CarPlay and Android Auto integration, the multimedia system doesn’t have a learning curve. The majority of features are only one or two taps away. You get crisp graphics, too, adding to the UI’s modern look.

Toyota’s infotainment system is easy to use but feels old compared to the Chrysler’s. Although the Sienna’s display is only an inch smaller than the Pacifica’s, the graphics look dated and it’s slower to respond to your inputs. Yes, it’s quicker than older Toyota units but it’s still slightly behind many interfaces including Uconnect 5.

Both cars have killer optional audio systems that are crisp and highly customizable. Each one immerses the cabin without sounding like it’s all bass and treble even if you turn the volume up. The Pacifica’s 19-speaker Harman Kardon system, however, gets the advantage for its overall balance.

The available rear-seat entertainment systems on the Sienna and Pacifica allow you to do everything from play or stream movies to hook up mobile devices. With the optional 1500W inverter, you can run small appliances in the Sienna. Both also have USB and HDMI ports in case you want to run a gaming console in the vehicle. Unfortunately, the Sienna only has one large display for rear passengers whereas the Pacifica has two, giving passengers more choices for entertainment. Both the Pacifica and Sienna also have at least seven USB ports, meaning no mobile device should ever run out of juice on road trips.

Every 2021 Sienna gets Toyota Safety Sense 2.0 as standard. As in other vehicles, the system is calibrated on the conservative side meaning it’ll leave more room between you and the vehicle ahead even with distancing in its closest setting. Adaptive cruise control brakes sooner and accelerates less assertively, too. Lane-keeping assist uses the steering to keep you from drifting around and does so in a subtle manner. It’ll help you take gentle curves on the highway as long as the road markings are clear.

The Pacifica’s suite is a little more proactive on the adaptive cruise control side and doesn’t leave as much room ahead if you put the distancing in its closest setting. Braking and acceleration, however, are similar to the Sienna’s, meaning the system slows the car down early and doesn’t move forward right away when the vehicle ahead drives away. Where the Chrysler falls behind a bit is lane-keeping because it’s more of a warning. During the times it did steer the Pacifica back to center, the inputs were a little too gentle.

If you’re prioritizing comfort, the Pacifica and Sienna should be on your radar. Both offer supple rides because their suspensions do a fantastic job absorbing all kinds of road imperfections. However, the Pacifica handles slightly better thanks to quicker steering and fewer body motions. The Sienna has more body roll through corners and it’s a little more leisurely when you turn the wheel, resulting in it driving as big as it looks.

Only 15 hp separates the Sienna’s hybrid system from the Pacifica. At 245 hp and 260 hp combined, neither are overly powerful respectively but they won’t leave you wanting. Their electric motors help them move quickly but the Pacifica’s more responsive powertrain is livelier. For most driving situations, the Chrysler stays in EV mode until the battery is depleted. Unfortunately, it doesn’t have any drive modes, meaning you can’t save the charge for later use or go into hybrid mode.

The Sienna is equally smooth in its operation, showing off Toyota’s hybrid powertrain mastery. You get a little more energy recuperation during regenerative braking, especially in AWD-equipped Sienna models, which have a second electric motor in the rear axle. The Pacifica gets stronger regeneration in L mode but it won’t fully recharge the 16.0-kWh battery. You get more natural braking feel in the Toyota thanks to smooth transitions from regenerative to mechanical braking in most driving situations. However, both the Sienna and Pacifica can be grabby during hard stops or if you dig deeper into the brake pedal.

The Chrysler Pacifica starts at $41,490 including destination and is eligible for the full $7,500 federal tax credit plus state rebates and incentives. In comparison, the Toyota Sienna starts at $35,635 in FWD configuration. Adding AWD adds $2,000 to the sticker price. Fully loaded both minivans can break the $50,000 mark.

Get the Chrysler Pacifica Hybrid if you want:

Get the Toyota Sienna if you want: