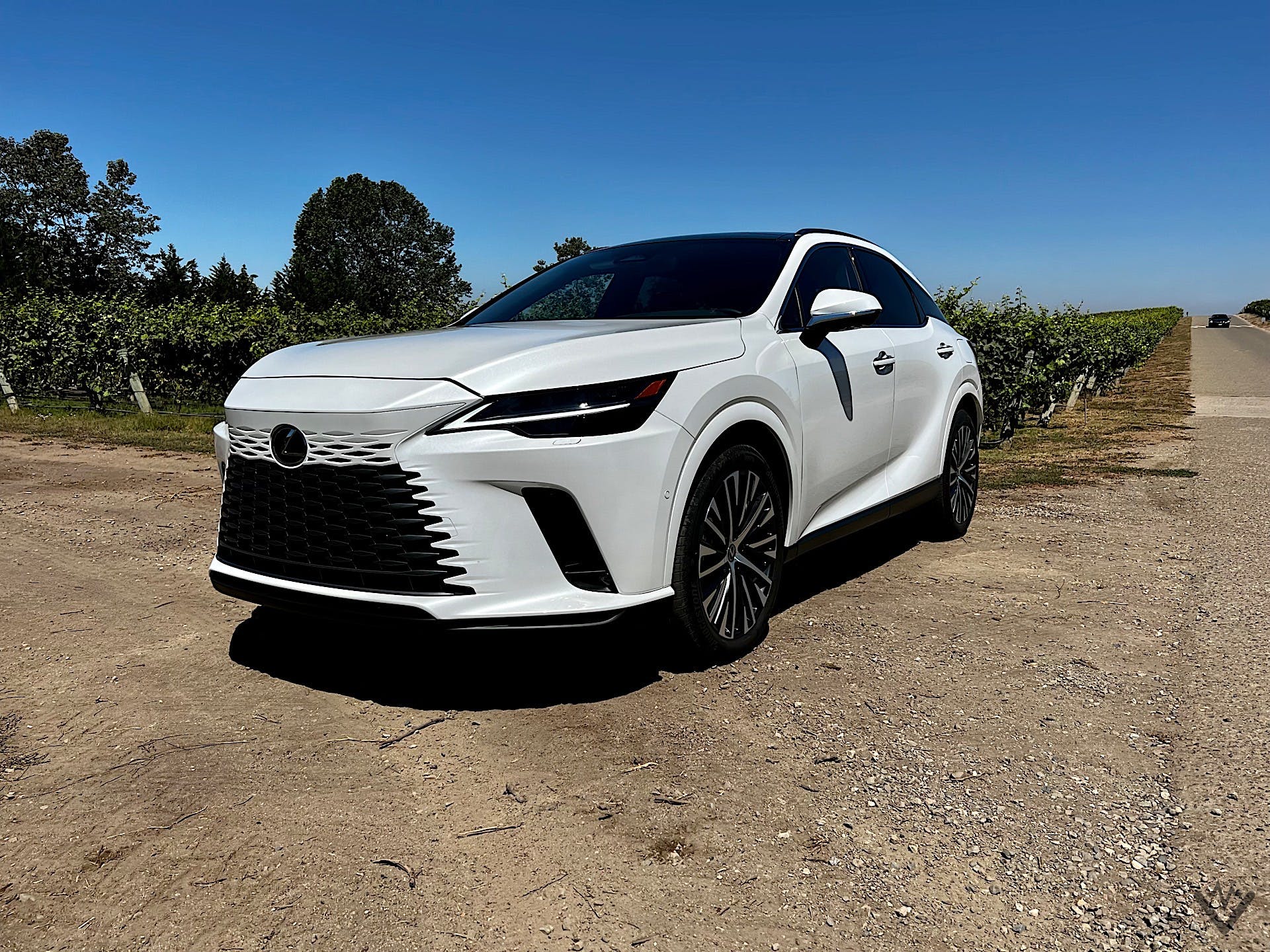 Santa Barbara is a beautiful community north of Los Angeles that has some amazing beaches just minutes away from some amazing vineyards. It’s an ultimate weekend getaway.

The updated 2023 Lexus RX feels right at home driving along the grape-lined roads of the California country, and the car is more environmentally-friendly than ever.

Sitting at the top of that tree is the return of the 450h+, the plug-in hybrid of the range.

Even though it’s going on sale later than the rest of the Lexus lineup, the company provided a European-spec model for us to spend a little time in. After we figured out what a “kilometer” is, and how many of those needed to be shown to be breaking the speed limit, we set off to try the different drive modes and check the performance.

In the full EV mode of the new RX 450h+, the car won’t activate the gasoline engine even under full throttle. This mimics the behavior of the updated Volvo XC60 Recharge, which we consider a direct competitor.

Acceleration isn’t mind bending under only EV power, but it’s enough to get out of its own way and merge onto the highway without putting a fear of God in you.

If you put it in Sport, using both the gasoline and electric motors, Lexus claims that the 450h+ will reach 100 km/h in 6.5 seconds. Assuming nothing changes on the U.S.-spec, that should mean a 0-60mph time of roughly 6.3-6.4 seconds.

The 18.1 kWh battery pack should go an anticipated 65 kilometers on pure electricity. That compares favorably against the before mentioned XC60 Recharge, which when we drove it in Europe achieved 61 kilometers on the highway. The WLTP estimate for the Volvo was 55 kilometers.

The RX 450h+ has a CVT transmission, like most hybrids, and we found it to be capable and mostly quiet. The Volvo’s transmission is probably a little bit quieter on throttle, but both transmissions become virtually silent in normal driving.

The rest of the car is premium Lexus fare, just like the rest of the RX lineup. When we get a chance to drive a U.S.-spec version, we’ll get a real world range number and check the fuel economy, but there are some takeaways we can already share.

The RX 450h+ is the Lexus to get if you want the most premium, luxury experience. Running on EV mode at highway speeds is like driving a dedicated EV, but you have the range — if needed — to go anywhere with the gas motor.

Like most PHEVs, if you aren’t going to plug in you should probably just look at an efficient standard hybrid vehicle. These vehicles become extremely efficient when you can use the plug, but the added weight can hurt economy a bit if you don’t capitalize on the plug.

Speaking of plugging in, the Euro-spec car has a 6.6 kW onboard charger, meaning you can fully charge the battery in about 2.5 hours. That could change by the time the car goes on sale in the States, but it’s unlikely. That 2.5 hour number is fairly common for PHEVs on sale now.

If you care about performance, the hybrid 500h F Sport Performance is the one to get, but the efficiency and luxury of the 450h+ is hard to beat.