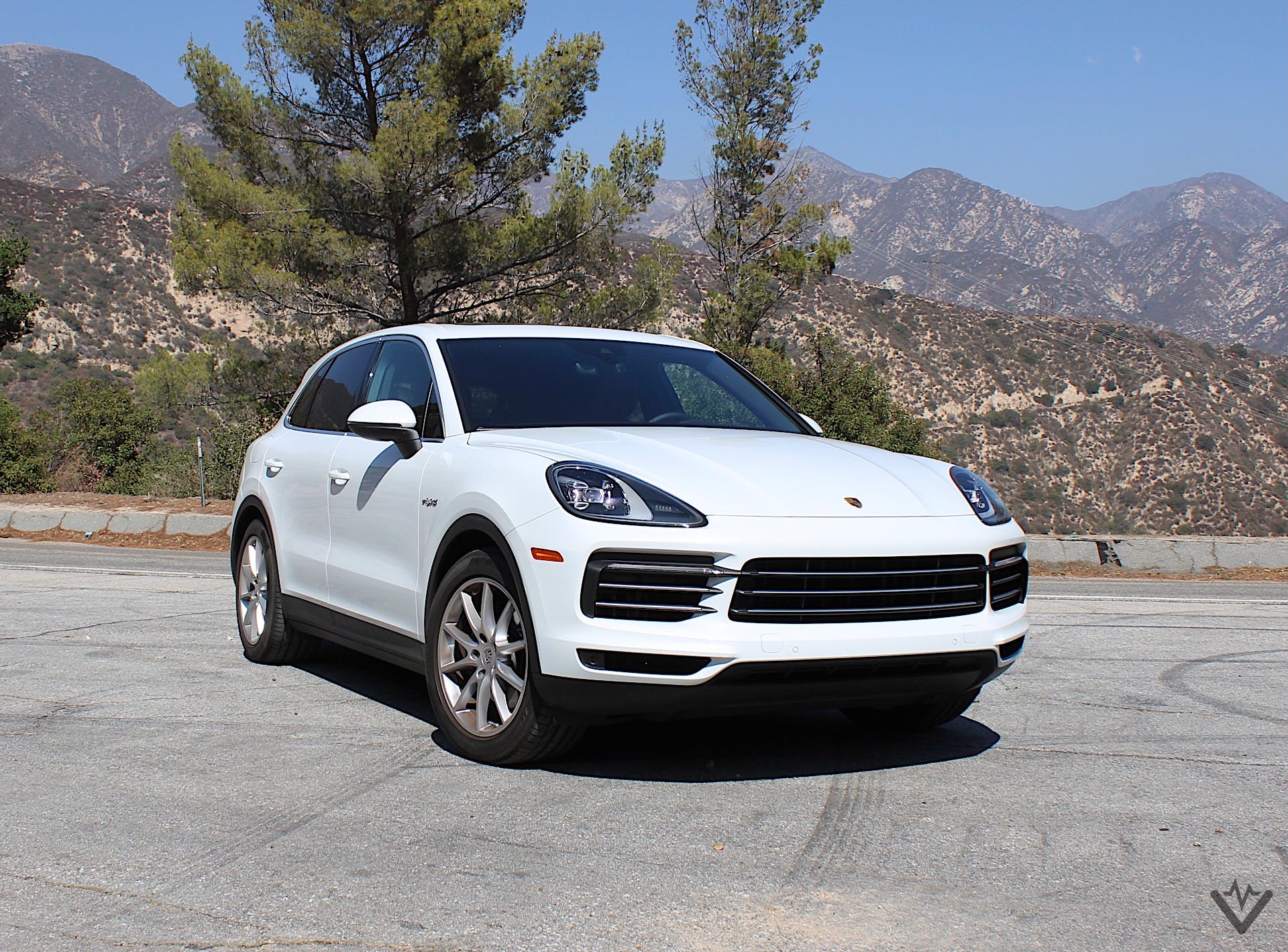 A Porsche needs to be a Porsche first. What does that mean? To put it simply, a vehicle needs to perform at the level expected of other models wearing that iconic crest. Even if it’s not a sports car, there’s an expectation that everything donning it must be one of the best performers in its segment.

That’s no different in the case of the 2021 Porsche Cayenne E-Hybrid. Since it arrived in the early 2000s, this crossover has made a name for itself as the driver’s choice among luxury mid-size crossovers. With electrification, that gets amplified because even the so-called least powerful version possesses the traits and talents of a proper Porsche.

Despite its crossover dimensions, you won’t mistake the 2021 Porsche Cayenne E-Hybrid for anything else. The rounded headlights and wide lower front grille give it the Porsche family look but with cues that distinguish it from the rest of the lineup. In the rear, you find full-width LED taillights with Porsche spelled out across the strip connecting both clusters just like in the 911 sports car. Despite its upright greenhouse, the Cayenne has attractive proportions blending curves with clean lines to create a stylish look while retaining great visibility. There’s also a swoopier model called the Cayenne Coupe, which has a lower roofline and a rear window that’s less upright.

The Cayenne E-Hybrid has a spacious interior with comfortable seating for five. It’s also incredibly flexible thanks to the 40/20/40 split-folding rear seats that also slide forward and back. You get a squared-off space, allowing you to easily fit bulky items with the second row folded. Dropping the center position enables you to carry long items while retaining seating for four. Even with all seats up, there’s plenty of room for your bags to take on a long road trip. Large door pockets and a sizable center console bin give you lots of places for your mobile devices and small items.

Porsche’s standard comfort seats provide plenty of adjustment for both the driver and front passenger. This means it’s easy to find your ideal driving position regardless of your body type. The cushions, on the other hand, are on the firm side and may not be to the liking of those who prefer to have more give in their seats. You can also opt for adaptive sport seats with additional adjustment and more aggressive bolstering.

Rounding out the cabin is impeccable build quality. Everything you touch feels expensive and reassuringly tactile. Everything you interact with is either padded or made of high-quality components. The attention to detail is top-notch, too; physical controls are knurled and decorated with bright accents to contrast with our test car’s two-tone black and red leather upholstery. Generous levels of sound deadening keep the cabin free from engine and wind noise. However, the wide tires create a noticeable amount of road noise.

Porsche’s latest PCM infotainment system is quick, intuitive, and easy to use. It retains key shortcuts on the left side of the 12.3-inch touch screen, which features multiple customizable tiles. However, Apple CarPlay only takes up 75 percent of the display while the other 25 percent are shortcuts to other functions like communications and media. The 14-speaker, 710-watt Bose surround sound system is clear but could be more immersive because it doesn’t cover the cabin as evenly as competing Harman units. If you’re an audiophile, get the 21-speaker, 1,455-watt Burmester 3D High End surround sound system.

The Cayenne is available with a full suite of driver assistance features. Its collision prevention technologies are unobtrusive and you wouldn’t know they were there until you get into the situation when they’re needed. You can add lane-keeping assist, traffic jam assist, and adaptive cruise control as part of the Porsche InnoDrive feature that you can get as a stand-alone option or as part of the Assistance package that also includes night vision, a head-up display, and a surround-view camera system.

Performance is high on the list of priorities for the Cayenne even in E-Hybrid guise. As a result, it handles like a proper Porsche; there’s next to no body roll when you toss it into a corner and it grips the road better than any crossover has any right to. The steering is accurate and quick so you know exactly what the front wheels are doing. Its weighting is nearly perfect, meaning it’s easy and light in city driving but tight and firm at highway speeds.

The suspension calibration superbly balances comfort and handling. While it’s taut, the Cayenne doesn’t beat you up and does a fantastic job absorbing harsh impacts even with the available adaptive air suspension in its sportiest mode and set to its lowest height. You feel the road but won’t bust your kidneys. One aspect of the Cayenne that doesn’t disappear is its size. This is especially noticeable on tight turns and narrow roads where the Cayenne takes up a lot of space. The available rear-wheel steering system makes it more maneuverable but not enough to make you feel like you’re in a smaller vehicle.

The Cayenne E-Hybrid utilizes a turbocharged 3.0-liter V6 coupled to an electric motor, a 17.9-kWh lithium-ion battery, and an eight-speed automatic transmission. On its own, the engine makes 335 hp and 332 lb-ft of torque while the electric motor is good for 134 hp and 295 lb-ft. Combined, the total system output is a generous 455 hp and 516 lb-ft. Despite its 5,164-pound curb weight, the Cayenne E-Hybrid accelerates effortlessly. The ZF-sourced eight-speed automatic is smooth and quick; you don’t feel any shifts regardless of the mode the car is in. Between that, the electric assist, and the engine’s lag-free delivery, there’s power everywhere.

Even in all-electric mode, the Cayenne can easily get up to city speeds thanks to the prodigious torque. The accelerator pedal also has a clear detent with more resistance when you drive it using only the electric motor. Push past that barrier and the gas engine turns on to help motivate the vehicle.

Unlike other plug-in hybrids, the Cayenne E-Hybrid’s regenerative braking isn’t as strong. You’ll recuperate energy but not slow the vehicle down to a complete stop. Drivers still need to use the brake pedal like you would in an internal combustion vehicle. Adding to that are seamless transitions between regenerative and mechanical braking. It’s hard to tell where the handoffs occur in normal driving. Even when you need to make an emergency maneuver it’s impossible to tell when the blending and eventual transition happen.

Charging the battery pack to 100 percent using a level 2 AC charger can take around 4 to 5 hours with peak rates of up to 7.2 kW (3.6 kW is standard). However, that’s only if you get the optional upgraded onboard charger. A standard household outlet can also charge the car but that will double the time spent plugged in.

According to the EPA, the Cayenne E-Hybrid has an all-electric range of 17 miles. During our time with the crossover, we consistently blew past that figure, frequently traveling nearly 30 miles in EV mode before the gas engine kicked in. On a full charge and a full tank, the EPA rates the Cayenne E-Hybrid at 430 miles. When driven as a hybrid, it’s EPA-rated at 20/22/21 mpg city/highway/combined.

The 2021 Porsche Cayenne E-Hybrid starts at $83,150. Our test car came equipped with the Premium package along with several stand-alone options for a total of $101,650. Thanks to the larger 17.9-kWh battery pack, the Cayenne E-Hybrid, and Turbo S E-Hybrid are now eligible for the full $7,500 federal tax credit plus local and state incentives.

In typical Porsche fashion, the Cayenne E-Hybrid is endlessly customizable. There are so many ways you can personalize the car ranging from special interior upholsteries and exterior colors to additional performance goodies and larger alloy wheels. Beware, though, because going crazy with the options will easily cause the Cayenne’s price tag to balloon uncontrollably.

For three generations, the Porsche Cayenne has continued to defy logic, blending crossover practicality with sporty performance. Electrification builds on that by giving you additional versatility without losing what makes this crossover a standout, making the 2021 Porsche Cayenne E-Hybrid the ideal do-everything utility vehicle. It’ll cruise calmly in EV mode, devour mile after mile of highway on a long road trip, and gleefully attack winding roads when given the chance. The fact that it’s also luxurious further adds to its appeal.

The Cayenne E-Hybrid is the jack-of-all-trades luxury mid-size crossover, a multitalented machine that does nearly everything well and earns that crest on its hood.