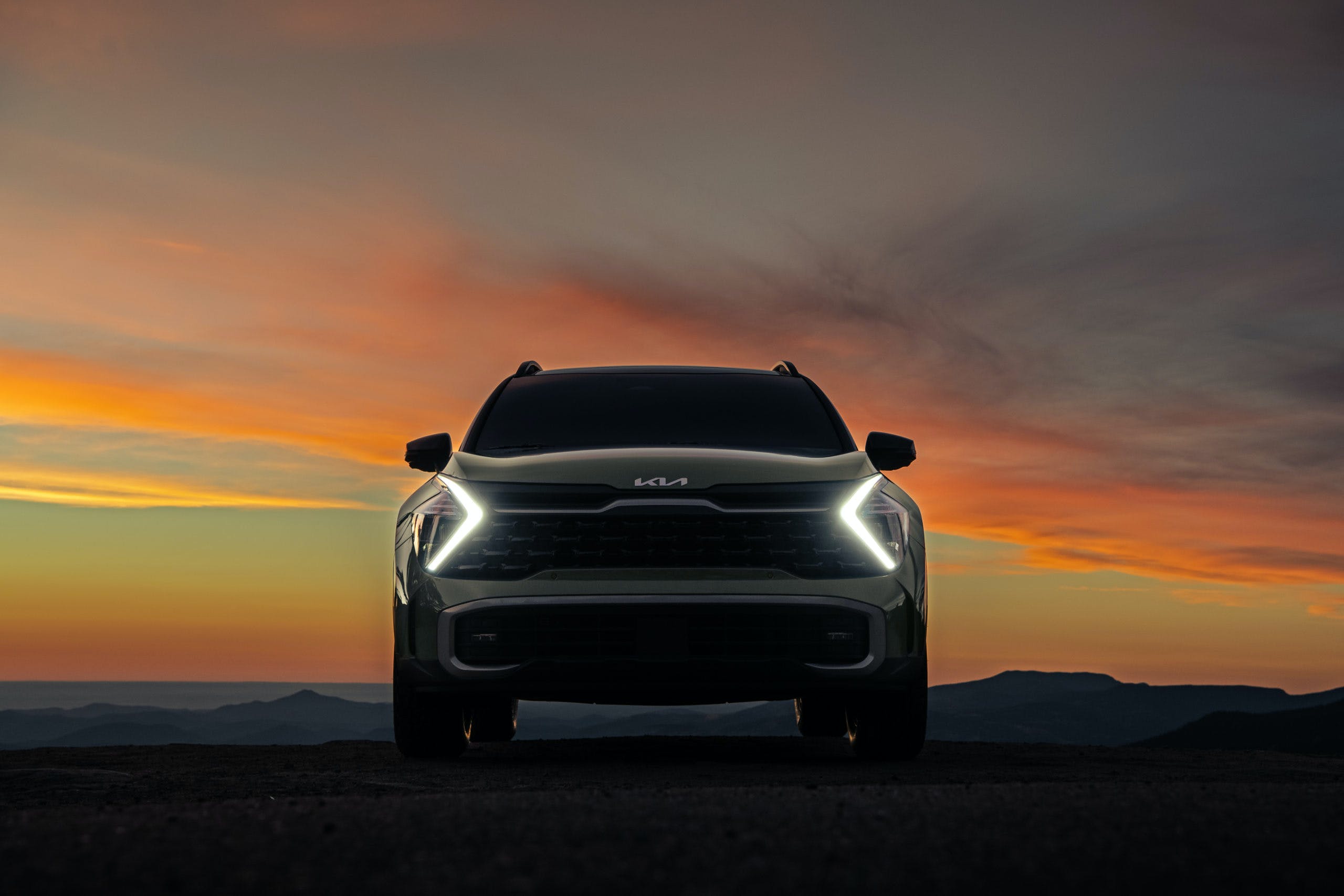 We’ve already seen the global-spec 2023 Kia Sportage multiple times but now we’re about to see the iteration destined for the U.S. market. The single teaser photo shows the compact crossover hiding in the shadows with only its daytime running lights illuminated. That’s all you need to see because you’re not mistaking that light pattern for another vehicle.

The 2023 Kia Sportage marks the fifth generation of the Korean brand’s longest-running nameplate. It rides on the same N3 platform used by several Hyundai and Kia models including the Tucson, Sonata, Santa Fe, Sorento, and K5. Standard and long-wheelbase versions will be available depending on the market. In the U.S., China, and Korea, the Sportage will be sold in long-wheelbase guise. Europe, on the other hand, will get the shorter standard wheelbase version.

Powertrain choices will include a hybrid and a plug-in hybrid for the first time. These will be the same units found in the Hyundai Tucson and Santa Fe, and Kia Sorento. That means the Sportage will get a 1.6-liter turbo-four coupled to an electric motor, a lithium-ion battery, and a six-speed automatic transmission. In the standard hybrid, the powertrain should make roughly 227 hp. Plug-in hybrid models get a more powerful 99-hp electric motor and a 13.8-kWh battery, increasing the total output to 261 hp. However, we don’t know if Kia will make AWD standard on the two electrified Sportage models. Hybrid and plug-in hybrid variants of the Tucson and Santa Fe and the Sorento PHEV get AWD as standard equipment. The Sorento Hybrid, on the other hand, is available in FWD and AWD configurations.

One of the big highlights of the 2023 Sportage will be the interior, which gets influences and cues from the all-electric EV6. Front and center on upper trims will be two 12.3-inch displays housed under a single piece of curved glass. They’ll be running the latest version of Kia’s infotainment system. The interior’s overall design will also be more traditional than its Hyundai cousin, the Tucson. That means it won’t get rid of every button and knob for climate and infotainment controls. Like the Sorento, the Sportage will have a combination of haptic feedback and physical controls.

Kia hasn’t revealed any more details regarding the North American-spec Sportage but we’re expecting the trim structure to mirror that of the Seltos, Sorento, and Telluride. That means the SX will be the range-topping model and could get an X-Line version with rugged styling cues. Typically, the Sportage is the sporty on-road-focused sibling to the Tucson, meaning Kia could add a GT variant instead. Expect the hybrid powertrains to be offered on mid-grade and higher trims only.

The 2023 Kia Sportage will make its U.S. debut on Oct. 27. It will be the latest vehicle in Kia’s product offensive following the Sorento, Carnival, and EV6. The Korean brand is expected to introduce several electrified models in its lineup with the Sportage Hybrid and PHEV being the latest to join the Sorento Hybrid and PHEV, and the EV6. In Kia’s lineup, the Sportage is poised to become its next bestselling vehicle as consumer demand for crossovers continues to increase quickly. This latest iteration could further expand the model’s appeal thanks to its electrified powertrain options.