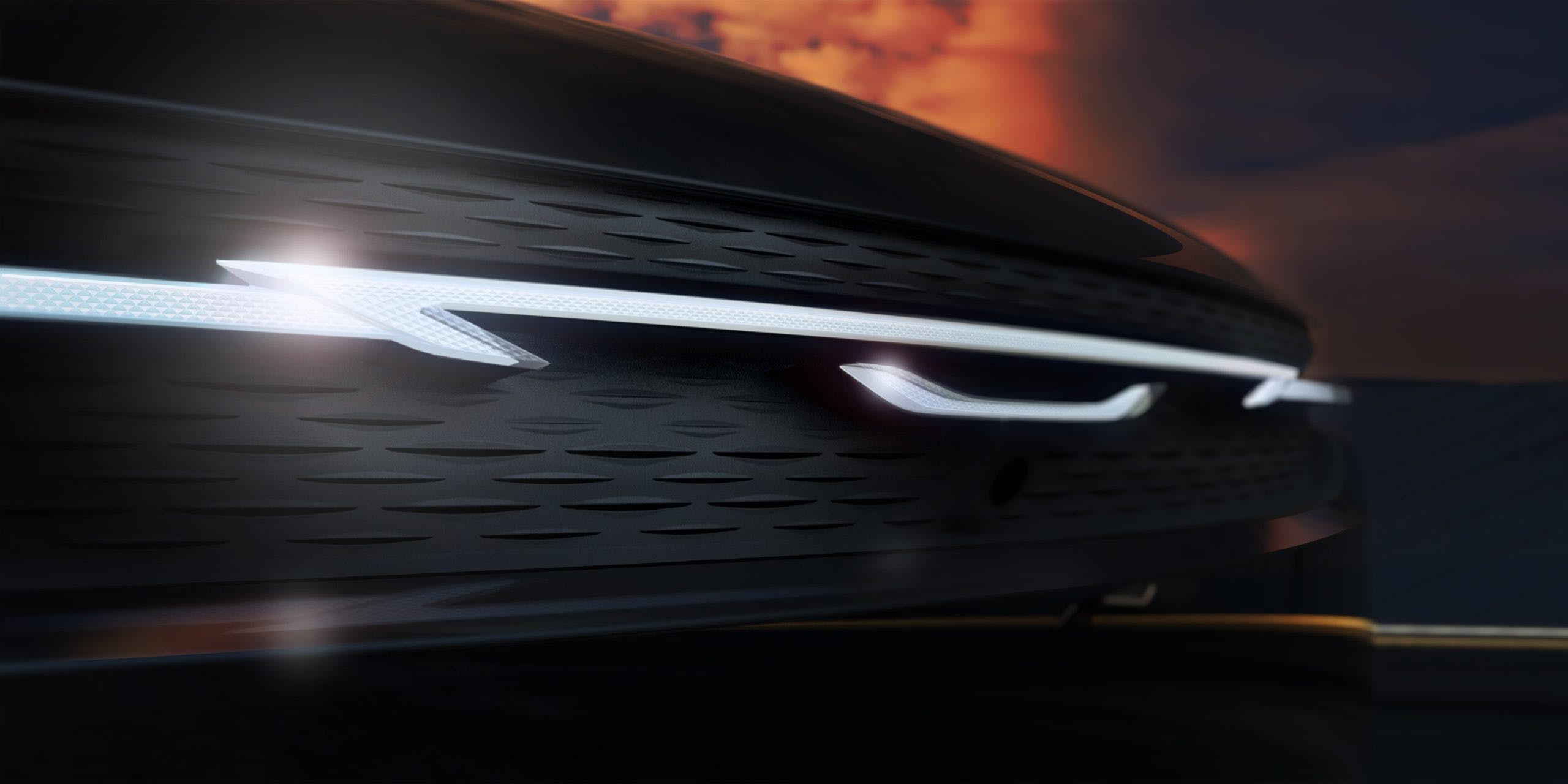 It was just over three months ago that we saw the Chrysler Airflow Concept for the first time at the 2022 CES Show. This vehicle previewed the Chrysler brand’s all-electric future, a crossover aimed at the likes of the Tesla Model Y, Ford Mustang Mach-E, and Hyundai Ioniq 5. At the 2022 New York Auto Show, we’re about the see the next evolution of the show car, and based on the single teaser rendering that was released, it appears to be getting new exterior lighting elements.

Looking closer at the details, the photo appears to be the front end of the Chrysler Airflow Concept. A new LED light spans the width of the front fascia and it seems to be mimicking the brand’s wing logo. This could preview the new face of Chrysler as it fully electrifies its lineup. Like the vehicle shown at the 2022 CES Show, the grille is enclosed and doesn’t appear to have any openings. You see a special pattern that looks like it’s trying to create a three-dimensional appearance.

The Airflow Concept showed off two key components of Stellantis’ electrification initiative: the STLA Brain software architecture and the STLA Smart Cockpit. The latter previews what future vehicles under the Stellantis umbrella could utilize in terms of the infotainment system. STLA Brain, on the other hand, emphasizes software and will no longer require vehicles to get newer hardware to acquire the latest features. Over-the-air (OTA) updates will allow the company to keep its vehicles fresh and modern throughout its life cycle. One of those updates will be STLA AutoDrive, a level 3 autonomous driving technology.

Underpinning the Airflow Concept is likely the STLA Medium platform, which is part of a larger family of BEV-specific architectures being developed by Stellantis. Chrysler said it can travel between 350 to 400 miles per charge, which is what that platform has been developed to do. It features two electric motors making a combined output of 300 kW of 402 hp. This also effectively gives the Airflow Concept AWD since there’s an electric motor mounted on each axle. Stellantis is also developing an 800-volt charging architecture for its upcoming vehicles, which should allow them to charge at higher peak rates.

Chrysler will be one of the key brands in Stellantis’ move to full electrification in North America. That move will be spearheaded by Jeep and Ram, both of which are getting their first BEV by 2024. Among those included are the all-electric Ram 1500, the ProMaster EV, and a small crossover that Jeep recently previewed with official photos. One year after that, Chrysler will introduce its first BEV, which is most likely the production version of the Airflow Concept. The show car that debuted three months ago looks close to production and it’ll likely only swap out specific design cues in the process.

By 2028, Chrysler will have an all-electric lineup according to Chris Feuell, Chief Executive Officer for the brand. Expect most of its vehicles to use the STLA Medium and STLA Large platforms. The latter could be utilized for an all-electric successor to the Pacifica minivan, which is the only one in its segment that’s currently available as a plug-in hybrid.