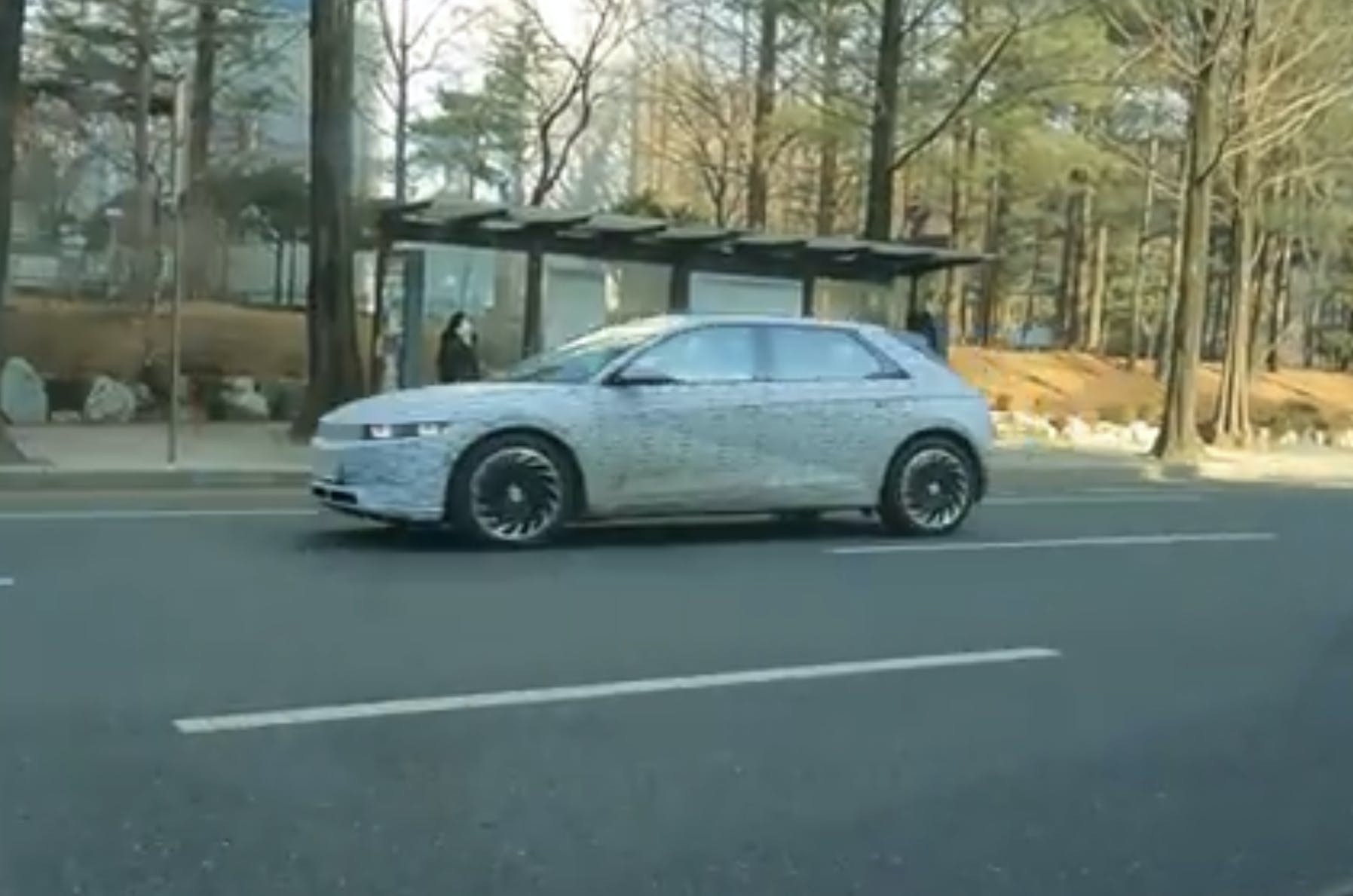 We’re a few weeks away from the official world debut of the 2022 Hyundai Ioniq 5 and we’ve found a Tesla Model 3 owner from South Korea getting up close and personal with a prototype and got it on video. The best part is that the person behind the camera caught some interesting details about the car.

Right off the bat, we see the charging port which uses a level 3 combo DC fast charger and has pixel-like lights next to it indicating the charge levels. Additionally, the person filming notes that the test driver plugged in a special connector, which appears to be a special cable to allow the car to use other types of chargers. We also get a closer look at the cool vortex-style 20-inch wheels, which are shod in 255/45R20 Michelin Primacy tires and the flushed door handles, which are reminiscent of the ones found in the Tesla Model 3.

Since the prototype is only covered with the geometric pattern camouflage, you can see most of its angular exterior. In typical Hyundai fashion, the Ioniq 5 barely deviates from the 45 Concept that it’s based on, giving it an angular retro-modern look. We get a clear look at the pixel-like LED taillights too, which also integrates the rear turn signal indicators in the same pattern. As the Model 3 driver follows the prototype, we see the Ioniq 5’s width in full display, giving it a planted stance. A roof spoiler elongates the roofline slightly while complementing the angular exterior.

In the first half of the video, the Model 3 is parked right next to the Ioniq 5, and its compact dimensions become clear. The Hyundai is slightly shorter than the Model 3 but it appears wider and a smidge taller. In a way, the Ioniq 5 looks like a slightly taller hatchback instead of a rugged crossover, hinting at its on-road mission, especially when you see how low it is to the road.

Look for the 2022 Hyundai Ioniq 5 to debut in mid-February. This will be the first vehicle on the Hyundai Motor Group’s E-GMP platform, which will be offered in single- or dual-motor layouts, the latter of which will be AWD. In the U.S., the Ioniq 5 will likely only be offered with the larger of two battery options with the single-motor RWD model offering the most range at 300 miles or slightly more. Dual-motor variants should offer more power and extra traction but expect the range to drop to around 280 miles per charge.