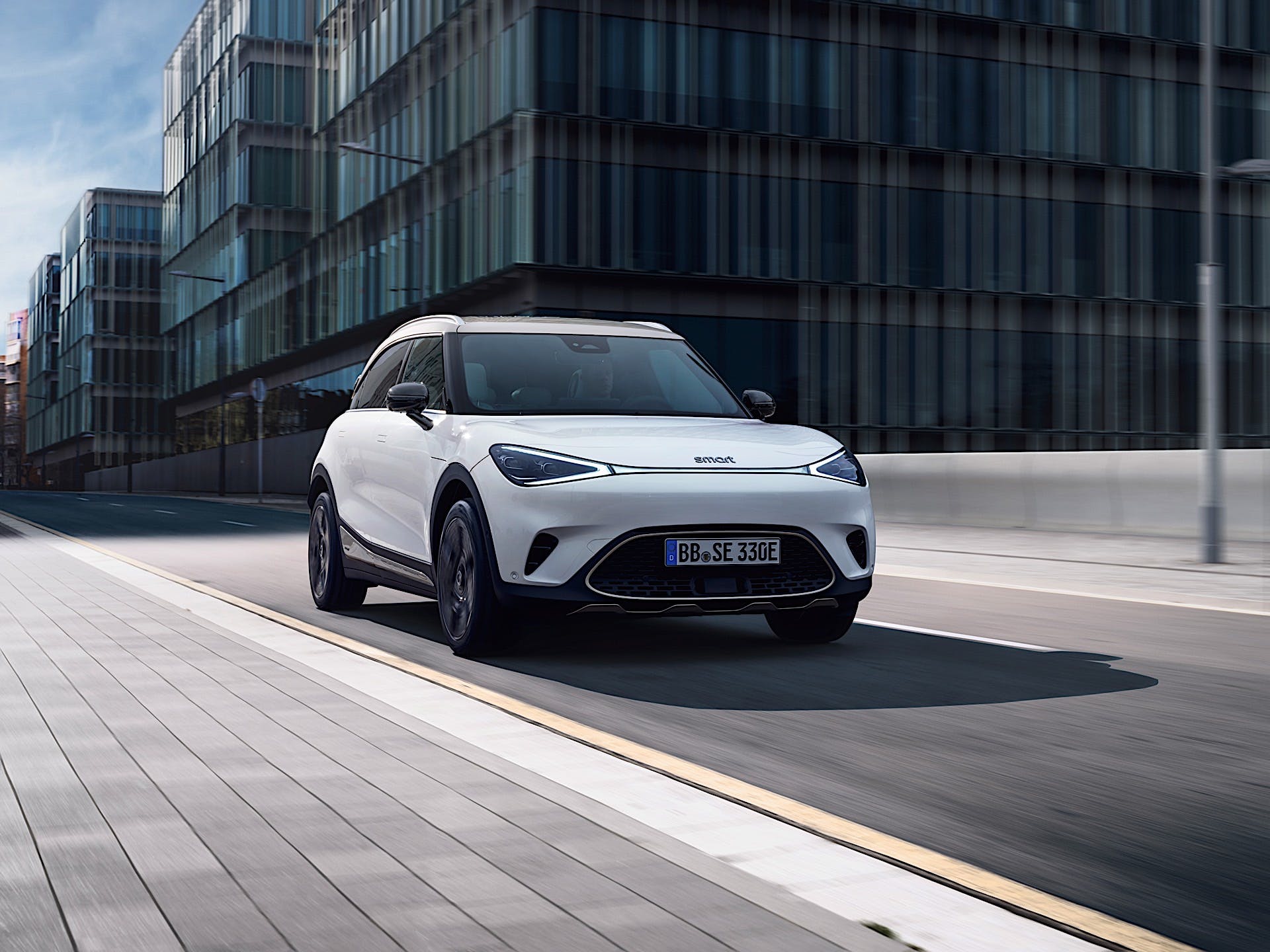 The production Smart #1 has been officially unveiled in Berlin, Germany marking the entry of the brand’s first crossover. At 168 inches long, it lands in the middle of the subcompact crossover segment. Its 108.2-inch wheelbase is on the lengthy end of the spectrum and gives the #1 a roomy interior. You can also opt for 19-inch alloy wheels, which are the largest ever put in a vehicle wearing the Smart logo. Most of the design cues from the concept have carried over nearly unchanged. The full-width LED headlights and taillights are there along with the upright greenhouse and available two-tone color scheme. Rounding out the exterior are smart badges on the C-pillar, flushed door handles, and frameless side windows.

Get inside the Smart #1 and you’ll find that its cabin looks similar to entry-level Mercedes-Benz vehicles. The centerpiece is a massive 12.8-inch main touch screen housing nearly every function from the climate controls to navigation. You get oval-shaped air vents and a storage area under the center console since there isn’t a mechanical gear selector. It also features a 9.2-inch display and a 10.0-inch head-up display in front of the driver instead of a traditional gauge cluster.

Cool tech features include a virtual assistant that you can toggle via voice control and over-the-air (OTA) updates that can further improve the vehicle via new features and software. There’s a digital key feature that you can pass to friends and family via an app. Every Smart #1 will be available with a full suite of driver assistance features. This includes adaptive cruise control, traffic jam assist, blind-spot monitoring, lane-keeping, automatic high beams, and automatic parking.

Smart’s latest vehicle rides on a new Geely-developed platform but it didn’t disclose which one it is. We suspect this is the SEA-A or SEA2 architecture both of which were specifically made to accommodate small cars and crossovers. The #1 uses a 66-kWh nickel cobalt manganese battery that can be DC charged at peak rates of 150 kW, enabling it to go from 10 to 80 percent in under 30 minutes. One of the unique features of Smart’s latest battery-electric vehicle is its AC charging, which tops out at 22 kW. That means it takes around 3 hours to go from 10 to 80 percent. A single electric motor mounted on the rear axle makes 268 hp and 253 lb-ft of torque effectively making the #1 RWD. On a single charge, it can travel between 260 to 273 miles depending on the configuration. A dual-motor version could also be added in the future but Smart made any announcements regarding that yet.

Launching alongside the Smart #1 is the brand’s digital ecosystem. It will include a network of partners to provide a new ownership experience. A physical retail component will remain so that drivers can have multiple ways to make purchases and keep in touch with the brand. In Europe, Smart aims to create a right-sized network complete with newly designed showrooms focusing on an upscale appearance to welcome new and existing customers to the company’s next iteration. It’s highly unlikely that the Smart brand will return to North America with its focus mainly on Europe and China. But if it somehow decided to, it now has a vehicle that can succeed here with the arrival of the #1.