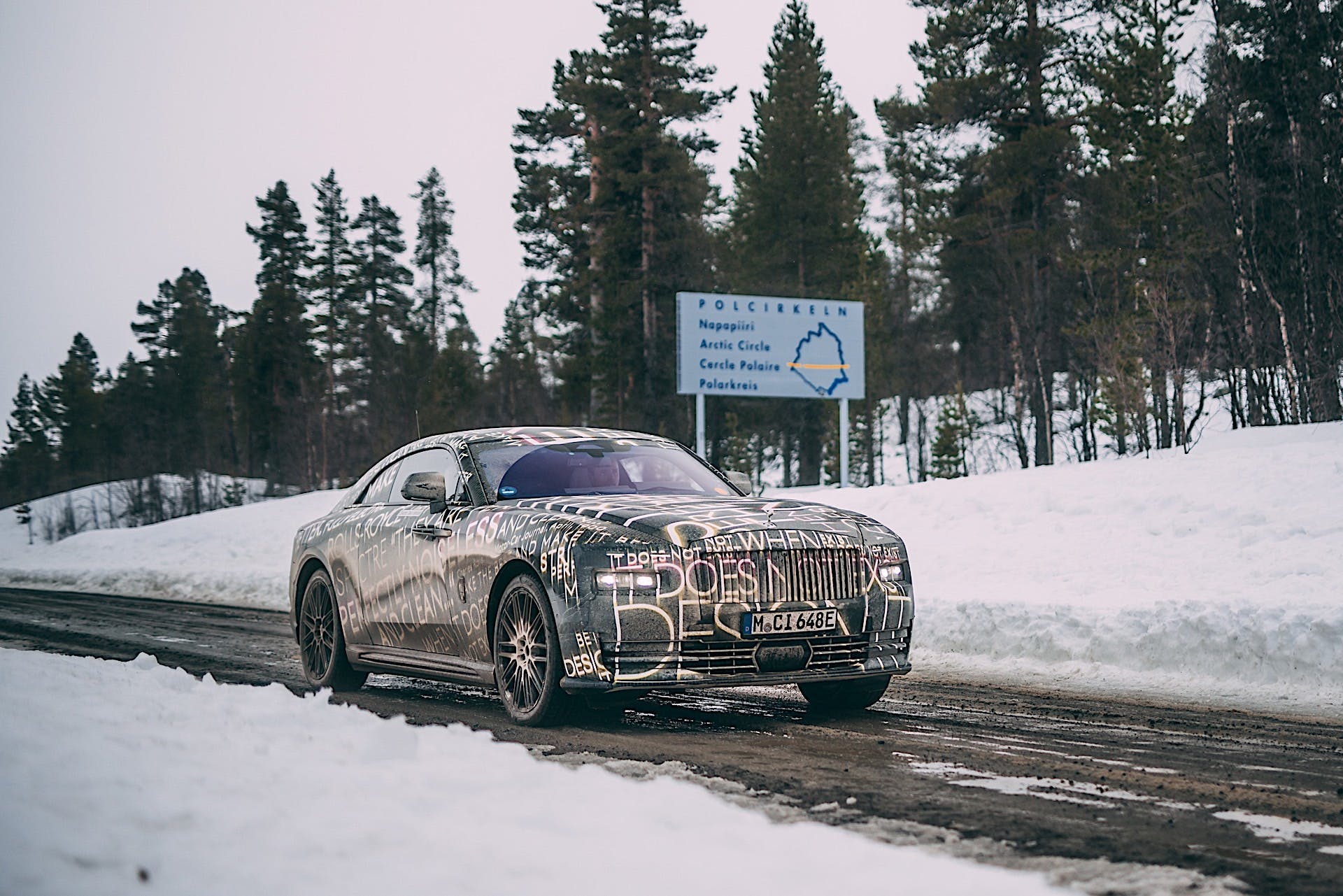 The upcoming Rolls-Royce Spectre has completed its cold-weather testing regime, a major milestone in the development phase of the brand’s first battery-electric vehicle. Evaluations take place in Arjeplog, Sweden just 55 km or 34 miles away from the Arctic Circle where temperatures go as low as -40 degrees Celsius.

Rolls-Royce Spectre prototypes are put through such extreme conditions so that engineers can ensure everything is operational and functions at a basic level in the bitter cold. They are then put through tests evaluating noise, vibration, and harshness where everything from major components to the bushing compounds, fastening materials, and bonding agents are all scrutinized. The efficiency of the car’s heating, ventilation, air conditioning, and cooling systems are also put through their paces.

Icy conditions also allow engineers to put the Spectre prototypes in situations that would usually occur at high speeds. This allows them to review the car’s behavior in slow motion, enabling them to fine-tune its handling, controllability, stability, predictability, and the marque’s trademark “waftability.” Rolls-Royce says this “trains” the Spectre to possess a driving experience befitting of the brand. Cold weather testing consists of over 500,000 km or 310,000 miles, completing 25 percent of the evaluation process.

The all-electric Spectre marks the next evolution of the legendary ultra-luxury brand. Dubbed Rolls-Royce 3.0, it marks the transition to electrification and the introduction of a new bespoke architecture built from the ground up with BEVs in mind. This also sees development work go into the digital space and the vehicle’s simplification.

The Spectre is the most connected Rolls-Royce vehicle to date with 141,200 sender-receiver relations with more than 1,000 functions and 25,000 sub-functions. In comparison, the Phantom has 51,000 sender-receiver relations, 456 functions, and 647 sub-functions. The new electronic and electric powertrain enables free and direct exchange of information without requiring centralized processing. This also cuts the length of cabling to 2 km or 1.2 miles from 7 km or 4.3 miles while writing 25 times more algorithms. Dedicated control units can be added for each function set, enabling superior levels of detail and refinement or what engineers call “Rolls-Royce high definition.”

Since Rolls-Royce’s first BEV is a coupe, it is considered the direct successor to the Phantom Coupe, which was in production from 2008 to 2016. Dubbed an electric super coupe, the Spectre takes inspiration from its predecessor and other Rolls-Royce two-doors. It will feature split headlights from the Phantom Coupe and a fastback roofline to create a vehicle that’s emotional and has a sense of grandeur. The Spectre will also be the first Rolls-Royce model to be available with 23-inch alloy wheels since 1926.

Rolls-Royce’s proprietary all-aluminum architecture allows the brand to create a distinct vehicle because it’s not built to underpin mainstream vehicles. Its flexibility also allows designers to dramatize the coupe experience in the Spectre. Thanks to the floor being mounted halfway between sill structures rather than on top or underneath, an aerodynamic channel for the battery is created, resulting in a smooth underfloor profile. This also creates a low seating position while offering an enveloping experience. Moving the bulkhead location also allowed designers and engineers to deepen the dashboard, enhancing the cocoon-like feel.

The low windshield rake, efficient airflow profile, and other aerodynamic improvements like the specially-made Spirit of Ecstasy improve the Spectre’s ability to slip through the air. As a result, early prototypes have a drag coefficient of 0.26. Engineers also gave the battery another purpose: 700 kg or 1,543 pounds worth of sound deadening. This is achieved thanks to the Spectre’s bespoke platform, which creates wiring and piping channels between the floor of the car and the top part of the battery.

With the completion of its extreme winter testing regimen, the Rolls-Royce Spectre continues the rest of its global testing program. It has another two million kilometers or 1.2 million miles left to complete before engineers declare the vehicle ready. Customer deliveries are expected to start in the fourth quarter of 2023.