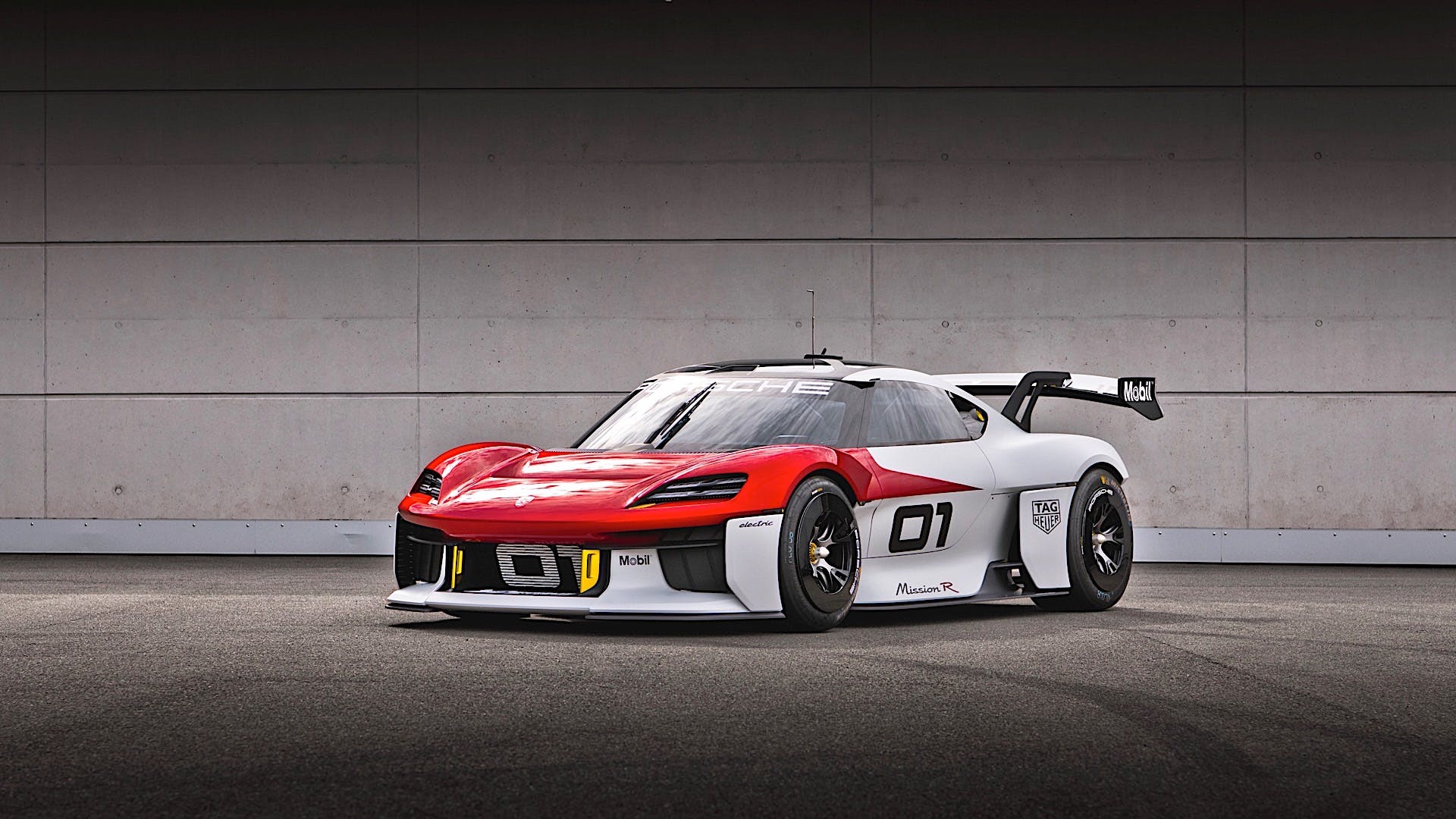 The Porsche Mission R Concept has been unveiled at the 2021 Munich auto show and it’s essentially a sustainably-built race car. You won’t mistake it for anything else but a Porsche because it features the brand’s iconic design language and hints at what its production counterpart could look like. Even with the giant wing, decals, and additional openings for improved cooling, it’s clear that this show car is hinting at something more than just a racing vehicle.

Featuring an 80-kWh battery pack and two electric motors effectively giving it AWD, the Porsche Mission R Concept packs a mighty punch. In Qualifying mode, the car makes a whopping 1,073 hp, allowing it to hit 60 mph in 2.5 seconds before topping out at 186 mph. This enables it to match the performance levels of the current 911 GT3 Cup car, allowing the Mission R to match its internal combustion counterpart’s lap times without experiencing degradation.

The Mission R Concept also features new cells and electric motors with direct cooling. This allows it to produce 671 hp consistently in Race mode, eliminating the derating phenomena that lowers the motor’s output due to thermal conditions. The front electric drive motor is good for 429 hp while the rear is rated at 653 hp. Thanks to its new 900-volt charging architecture, the Mission R Concept can DC charge from 5 to 80 percent in 15 minutes thanks to peak rates reaching up to 340 kW.

To help it slip through the air better, the Mission R Concept features the Porsche Active Aerodynamics (PAA) with Drag Reduction System (DRS). Three louvers in each side air intake and an adjustable two-section rear wing comprise the active aero component. Most of the Mission R Concept’s body is made out of natural fiber reinforced plastic (NFRP) to cut CO2 emissions and make it more sustainable. Flax fibers from farming are used extensively in the front lip spoiler, side skirts, and diffuser. NFRP is also found in the rear bulkhead, the seats, and interior door panels.

Since this is a race car concept, the Mission R’s interior is driver-focused. A display on the steering wheel shows all relevant race data right in front of the driver. A secondary screen positioned behind the steering wheel and right in the driver’s line of sight shows images from the side and rearview mirrors. Another display to the right of the driver shows biometric data while several interior cameras enable livestream transmission. The carbon-fiber monocoque and roof provide maximum protection while keeping weight down.

With that said, we think this concept car previews more than just an upcoming race car. From its proportions to its silhouette, everything about it screams next-generation 718 Cayman and Boxster. It’s well known that the 911 will be the last Porsche to get electrified and that the company is looking to make one of its sports cars battery-electric. The most viable candidate for that is the mid-engine 718 Series because they could easily accommodate a battery and electric motors without major modifications. As the brand continues to electrify with the arrival of the upcoming Macan EV, which will be on the new PPE architecture, it won’t be a surprise if the Cayman and Boxster are next to go on that platform. The Porsche Mission R Concept may have just previewed what that could be like in a thinly veiled show car.