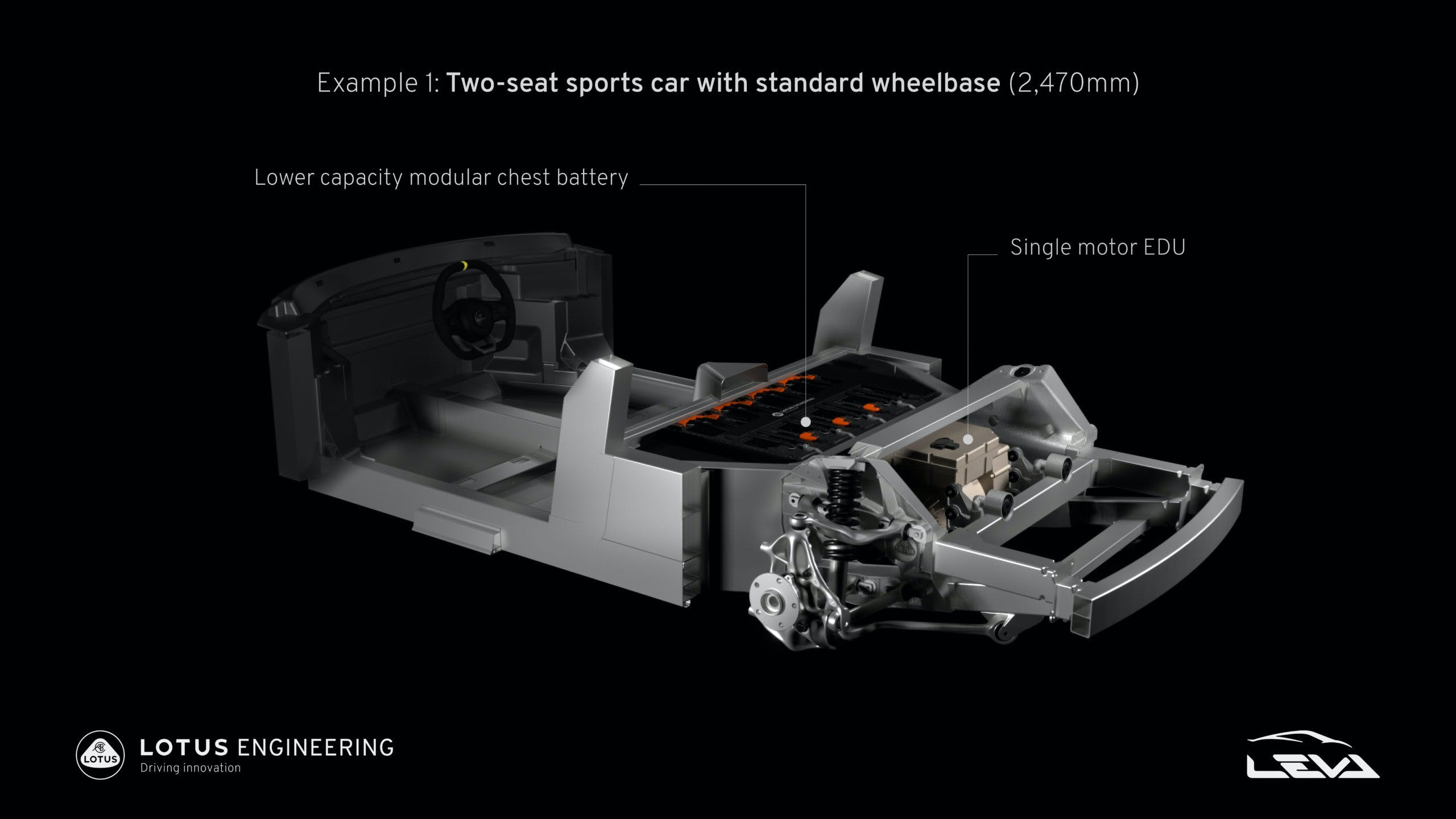 A few weeks after announcing that it’s launching a family of battery-electric vehicles, Lotus has revealed what will underpin the sports cars. Built with a focus on lightness and the new structure was developed under Project LEVA that’s accelerating the creation of a new platform that preserves the brand’s focus on lightweighting. The result is a new architecture with a rear end that’s 37 percent lighter than the platform underpinning the new Emira. Lotus and Lotus Engineering, its consultancy arm, will be able to leverage this new chassis and commercialize it.

The new Esports platform was developed to accommodate vehicles with wheelbases ranging from 97.2 to 104.3 inches. The shorter one was built for a two-seater or a 2+2 layout while the longer version is good only for a 2+2. Single-motor versions are good for 469 hp while the dual-motor versions can generate up to a whopping 871 hp. Short-wheelbase two-seat sports cars and the 2+2 will use an eight-module 66.4-kWh battery. Long-wheelbase two-seaters will get the largest pack, a 12-module, 99.6-kWh unit.

There will be two battery layouts depending on the vehicle you get. Two-seaters get chest configuration, which means the battery will be part of a mid-mounted power pack. The battery modules are stacked behind the seats. Lotus says this is ideal for sports car and hypercar applications due to the low ride height and center of gravity. Other vehicles will get the slab or skateboard-style layout, which is ideal for vehicles with a higher ride height and a taller profile. The battery is mounted under the passenger floor to keep the center of gravity low. To increase energy density, the battery cells are cylindrical and feature cold cure, spot bonding and advanced welding to reduce the environmental impact during their assembly.

Lotus reveals that the new platform will be used by their sports cars, the first of which will arrive in 2026. The brand also revealed that it will form the basis for a wide range of EVs. Lotus Engineering, on the other hand, will be able to offer the architecture to third party clients including other brands. There’s a possibility that this new platform could also underpin the sports car being developed as a joint project between Lotus and Alpine.

Funding to develop the new architecture came from the Advanced Route to Market Demonstrator (ARMD) program. The UK government’s department of Business, Energy, and Industrial Strategy (BEIS) awarded Lotus the funds on behalf of the Advanced Propulsion Centre (APC) by Cenex.

“Project LEVA and the electric sports car architecture are perfect illustrations of the innovation which continues to be at the heart of everything Lotus does, “ said Richard Moore, Executive Director of Engineering at Lotus Cars. Today’s EVs are heavy in comparison to their ICE equivalents, so the ARMD funding has helped Lotus to innovate earlier in the product cycle and develop a new vehicle architecture that targets lightweight and performance density from conception. Rather than developing a single vehicle, it means Lotus now has the ‘blueprint’ for the next generation of electric sports cars, for future Lotus products and for the Lotus Engineering consultancy to commercialize.”

Richard Rackham, Head of Vehicle Concepts at Lotus led the Project LEVA engineering team. He is best known for his work on the Lotus Elise where he developed the car’s extruded aluminum body. “Project LEVA is as revolutionary now as the Elise architecture was in 1996,” said Rackham. “In true Lotus spirit, significant weight savings have been achieved throughout, with a focus on ultimate performance, efficiency and safety being engineered into the structure from the outset — for example, by utilizing the vehicle structure as the battery enclosure, having an integrated EDU, eliminating bolt-on subframes and optimizing the multi-link suspension components.” Lotus collaborated with several Partners for Project LEVA including Sarginsons Industries and leading academics from Brunel University in London.