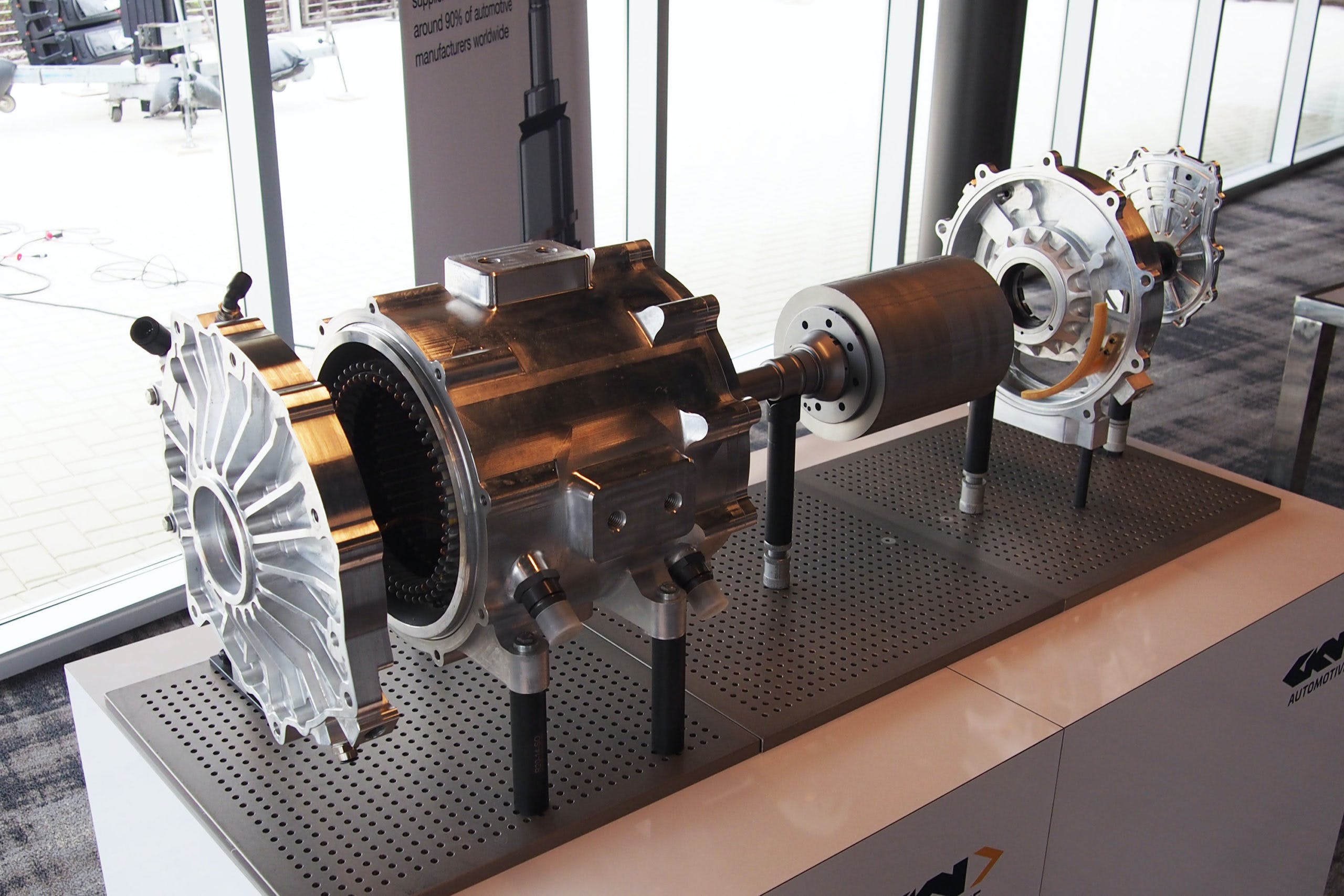 Just like internal-combustion engines, electric motors generate heat while running – a lot more than you might expect. Dissipating this thermal energy is critical to the performance and longevity of EVs, which is why GKN Automotive is developing oil-cooled motors that deliver the same output as larger units, but in a smaller, lighter, more-affordable package. The results of this research are astonishing.

According to Andreas Mair, director of mechanical engineering at GKN Automotive, all motors (in engineering parlance they’re technically called electric machines) used in electric vehicles are liquid cooled, but only indirectly by a jacket that surrounds the outside of the stator. This is, not surprisingly, far less efficient than directly cooling specific internals where the heat is generated. Today’s designs are akin to cooling the exhaust system of a combustion-powered car. Yes, you’re keeping temperatures in check, but not from inside the cylinder block where the heat originates.

When current flows through the copper windings of a motor, it creates ohmic losses, “That’s the main source [of heat],” Mair explained, though there are others. GKN’s new design directs oil at the ends of these windings to provide cooling exactly where it’s needed, opposed to generically around the outside of the case. “And this is what we have investigated and are further investigating,” Mair said.

SEE ALSO: The Blue Arc Power Cube is a portable EV charger that can be driven like a remote-controlled car

Electric motors, just like your favorite combustion engine, have an ideal operating temperature range. Mair said, motors must be kept at less than 180 C (356 F) or you start having materials issues. Magnets can even demagnetize at those temperatures, which is, understandably, not desirable.

The results of GKN’s research are staggering. “With this additional cooling, you are able to increase the continuous [torque] … from 150 to 200 newton meters,” said Mair, or go from 100 kilowatts to 135. “So, it’s an increase of the continuous values … of about 40%,” he added. “That’s why we are doing it.”

GKN has developed three different ways of distributing cooling oil inside a motor. Currently, their preferred method uses the rotor’s central shaft and centrifugal force to spray oil at the head windings, but this has some limitations at lower speeds. The second option drips oil onto the ends of the stator and the third incorporates a separate manifold to precisely direct cooling fluid where it’s needed. Mair said they have not decided which option to go with for production models because they’re “still investigating pros and cons.” They’re also actively researching coolants other than oil. He said the greater the water content a coolant has, the better it can absorb heat.

But regardless of how oil is directed at the head windings, all of GKN’s designs use an electrically driven pump to move the oil, which allows them to control precisely when it is circulated for maximum efficiency. The pump can be a stand-alone unit or, depending on application, shared with the vehicle’s gearbox. After doing its job, the oil is then routed through a heat exchanger that ties into the vehicle’s broader cooling system.

CHECK THIS OUT: EVCS wants to elevate your charging experience

An internally cooled electric motor sounds like it might be less efficient than other designs because of drag. But with GKN’s configuration, there may only be a liter or so of cooling fluid in the whole system, plus the rotor is not spinning in a deep bath of oil, rather, the liquid is only directed at the head windings, so parasitic losses are kept to a minimum.

Internally cooled electric motors are still under development, but they are expected to hit the market soon, likely in the next 3 years or so according to Mair. “We see it for the mainstream in the medium to higher power and torque range,” so likely midpriced EVs and up, though he said for larger vehicles, “You will see it in all of them in the future.” And why not? Getting 40% more power and torque out of an electric motor without adding much cost or complexity makes this technology a potential EV gamechanger.