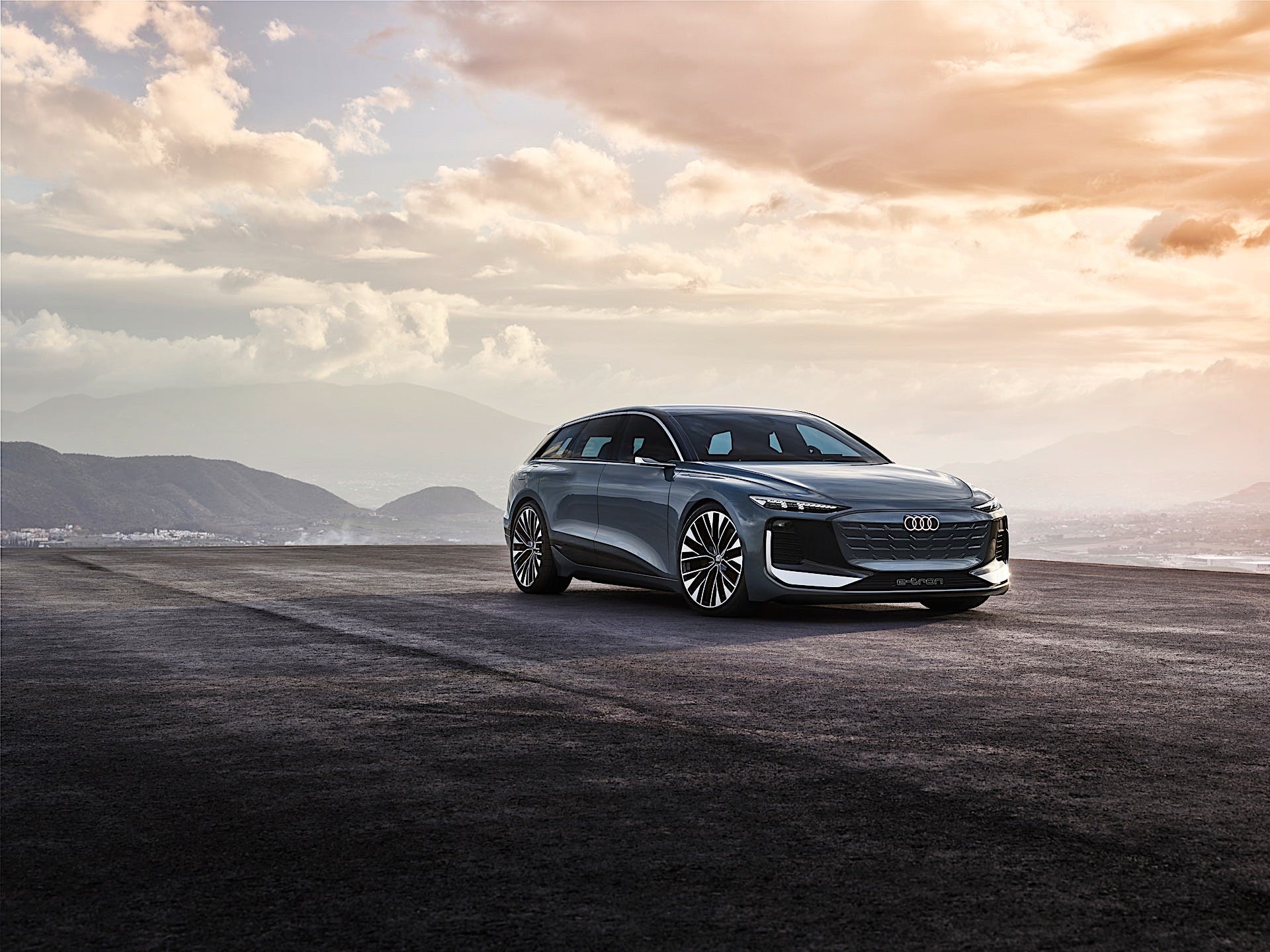 The second concept previewing the next-generation, all-electric Audi A6 e-tron family has been revealed. Called the Audi A6 Avant e-tron Concept, this is the sexy battery-electric wagon of the future. At 16.3 feet long, 6.4 inches wide, and 4.7 inches tall, the long roof version’s dimensions are identical to the A6 Sportback e-tron Concept shown at the 2021 Shanghai auto show. This also puts it squarely within the mid-size realm, meaning it’ll be competing with the likes of the Mercedes-Benz EQE sedan and BMW i5 when it turns into a production model.

Most of the Audi A6 Avant e-tron Concept’s exterior design carries over from its Sportback sibling. You get the same enclosed single-frame grille, wide air curtains, and tiered LED headlights. The roofline is lower than your average wagon, likely for improved aerodynamics. Audi claims that this wagon has a drag coefficient of 0.24, only 0.02 higher than the Sportback. Its rear window isn’t as vertical either, giving it a sportier look, even with its more expansive side glass area. There are two diffusers reminiscent of what you’d find in the current RS 6 Avant. Like the Sportback, the A6 Avant e-tron Concept also gets full-width LED taillights with an illuminated Audi logo. Rounding things out is a silver contrasting roof, a roof spoiler with two openings, and 22-inch alloy wheels.

Digital matrix LED and OLED lighting technology provides maximum brightness without using big projectors. This also allows for the creation of cool light signatures, which has long been an Audi hallmark. Four LED lights embedded on the side of the A6 Avant e-tron Concept are used for turn signal projections, which can be modified based on the regulations of each market. The headlights are also used to project media into a wall, allowing occupants to do things like play video games while the vehicle is plugged in and charging. Certain lighting elements like the headlights and taillights can also be used to communicate to other road users to alert them of traffic conditions and weather changes.

Both A6 e-tron concepts provide a glimpse at the future production variant based on the PPE platform co-developed with Porsche. Designed specifically for battery-electric vehicles, this architecture will allow Audi to put the battery, which will be around 100 kWh, flat under the passenger compartment and between the axles. This also opens more possibilities because Audi can use the scalable platform for a broad range of vehicles beyond the A6 e-tron family. Its two electric motors make a total of 469 hp and 590 lb-ft of torque. The standard air suspension features a multilink setup on both axles and has adaptive dampers. Audi says that the entry-level models can hit 100 km/h (62 mph) in less than 7.0 seconds while higher performance versions will do the same deed in under 4.0 seconds.

An 800-volt charging architecture is standard on the A6 Avant e-tron Concept and will find its way into production vehicles on the PPE platform. This allows the car to DC charge at peak rates of up to 270 kW, enabling it to regain 300 km or 186 miles in 10 minutes. DC charging the 100-kWh battery from 5 to 80 percent takes less than 25 minutes according to Audi. On the WLTP cycle, the brand claims that the A6 Avant e-tron is good for up to 700 km or 435 miles per charge depending on the powertrain configuration.

The production version of the Audi A6 Avant e-tron Concept will be among the first vehicles on the PPE platform. Audi’s first vehicle on this architecture will be revealed in 2023. Beyond mid-size and full-size cars and SUVs, Audi is looking at possibly using the PPE platform for compact and subcompact vehicles, which are the high-volume segments in competes in. This architecture will also provide economies of scale, enabling the company to use it on more models.