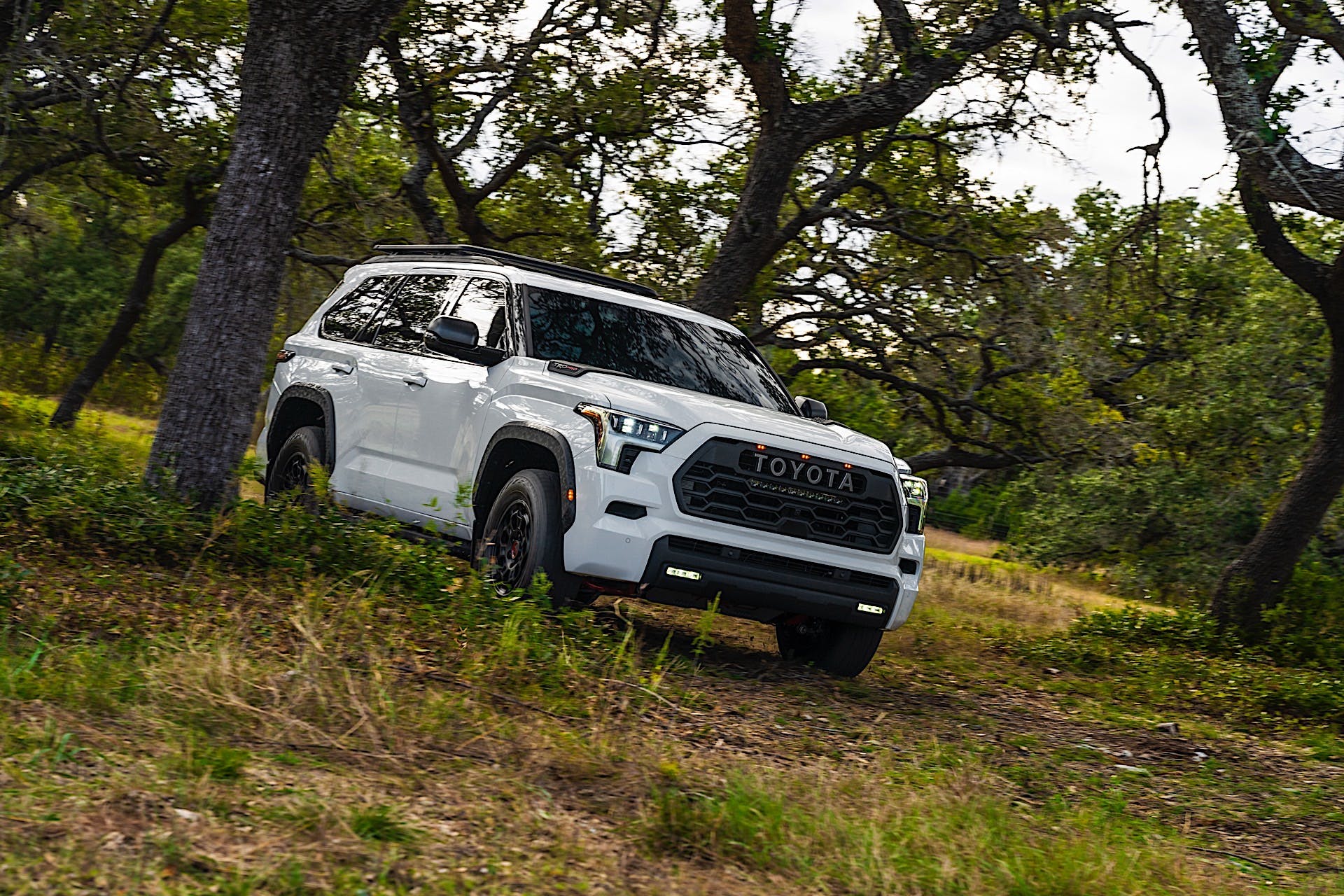 Hot on the heels of the redesigned Tundra is its SUV sibling, the 2023 Sequoia. This third-generation model comes more than a decade since the last redesign in 2007 and it’s packing an electrified powertrain standard on all models. That’s right, the new Sequoia follows the Sienna and Venza, making it the third new vehicle in Toyota’s lineup to switch to a hybrid-only offering.

To no one’s surprise, the 2023 Toyota Sequoia looks like a Tundra turned into an SUV. That’s not a bad thing because the Tundra is a handsome rig. It has an imposing new look complete with that massive grille and angular headlights with T-shaped LED daytime running lights. The greenhouse is upright just like most full-size SUVs but it complements the Sequoia’s new look quite well and allows for lots of glass area all around. Its nearly vertical rear end, on the other hand, is more conventional with its thin horizontal taillight cluster connected by a single chrome bar. Sequoia is also spelled out across the lower part of the tailgate.

Sharing the same TNGA-F underpinnings as the new Tundra, Land Cruiser, and the 2022 Lexus LX, the Sequoia offers five distinct trims. Every single one gets the i-Force Max hybrid system that first appeared in the 2022 Tundra. That couples a 3.5-liter twin-turbo V6 with an electric motor, a nickel-metal-hydride battery, and a 10-speed automatic transmission. The combined output is a meaty 437 hp and 583 lb-ft of torque. Toyota hasn’t revealed fuel economy estimates yet but expects the Sequoia to sit at the top of its segment, and see significant improvements over the V8-powered outgoing model.

To improve its body rigidity and ride comfort, the 2023 Sequoia now features a fully boxed frame just like the Tundra. It also utilizes laser welding in areas where it can reduce weight and reinforce critical zones. Like its predecessor, the new SUV features an independent suspension layout with a multilink setup in the rear. A new rack-mounted electronic power steering system promises an improved feel.

The 2023 Sequoia is the first generation of this SUV that gets a drive mode selector. On models with the load-leveling rear air suspension and Adaptive Variable Suspension (AVS), there are three additional settings: Comfort, Sport S+, and Custom. Sport and Sport S+ modes also take advantage of the electric motor, which does most of the work under 18 mph. Tow/Haul mode keeps the gas engine and electric motor in tandem operation so that they can provide the ideal amount of power and torque needed for hauling and towing.

When properly equipped the 2023 Sequoia can tow up to 9,000 pounds of payload. The Tow Tech package will be optional on all trims except the Capstone and TRD Pro where it’s standard. This adds the Trailer Backup Guide and Straight Path Assist, both of which help ease the act of hooking a trailer to your vehicle.

The Sequoia will be available with seating for up to eight passengers. Certain trims offer second-row captain’s chairs instead of a bench for added comfort. One of the neat tricks the 2023 Sequoia has is the adjustable cargo shelf that comes with the sliding third row. This gives the third row 6.0 inches of adjustment range and can also be folded to create different storage positions for the adjustable cargo shelf and add extra flexibility.

Moving up to the Limited trim gets you all of the extras from the SR5 with the SR5 Premium package and adds ventilated front seats, a heated steering wheel, and a power-folding third-row. 4WD-equipped SR5 and Limited models are available with the TRD Off-Road package, which adds a locking rear differential, the Multi-Terrain Select system, Downhill Assist Control, Craw Control, a 4WD Low setting, the Multi-Terrain Monitor, TRD-tuned springs and Bilstein shocks, and red front axle drive shaft. Cosmetic tweaks included on the TRD Off-Road package include a red TRD start/stop button, 18-inch alloy wheels, and aluminum pedals.

Those looking to go pretty far off the beaten path should take a look at the Sequoia TRD Pro. It gives you all the creature comforts and adds more off-road capability. It builds on the TRD off-Road package with TRD-tuned Fox internal bypass shocks, a front TRD aluminum skid plate, black 18-inch alloy wheels, and TRD Pro dual exhausts. Like the Tundra TRD Pro, the Sequoia gets the heritage-inspired grilled with Toyota spelled out across the top area. Additional extras include a TRD heated steering wheel, TRD accents on the shifter and seats, and a TRD roof rack.

The 2023 Toyota Sequoia goes on sale this summer. Pricing hasn’t been announced yet but we don’t expect it to deviate much from its predecessor, which starts at $51,995. It will be built at Toyota’s San Antonio, Texas assembly plant alongside the new Tundra.