2023 Subaru Solterra EV teased one final time ahead of debut 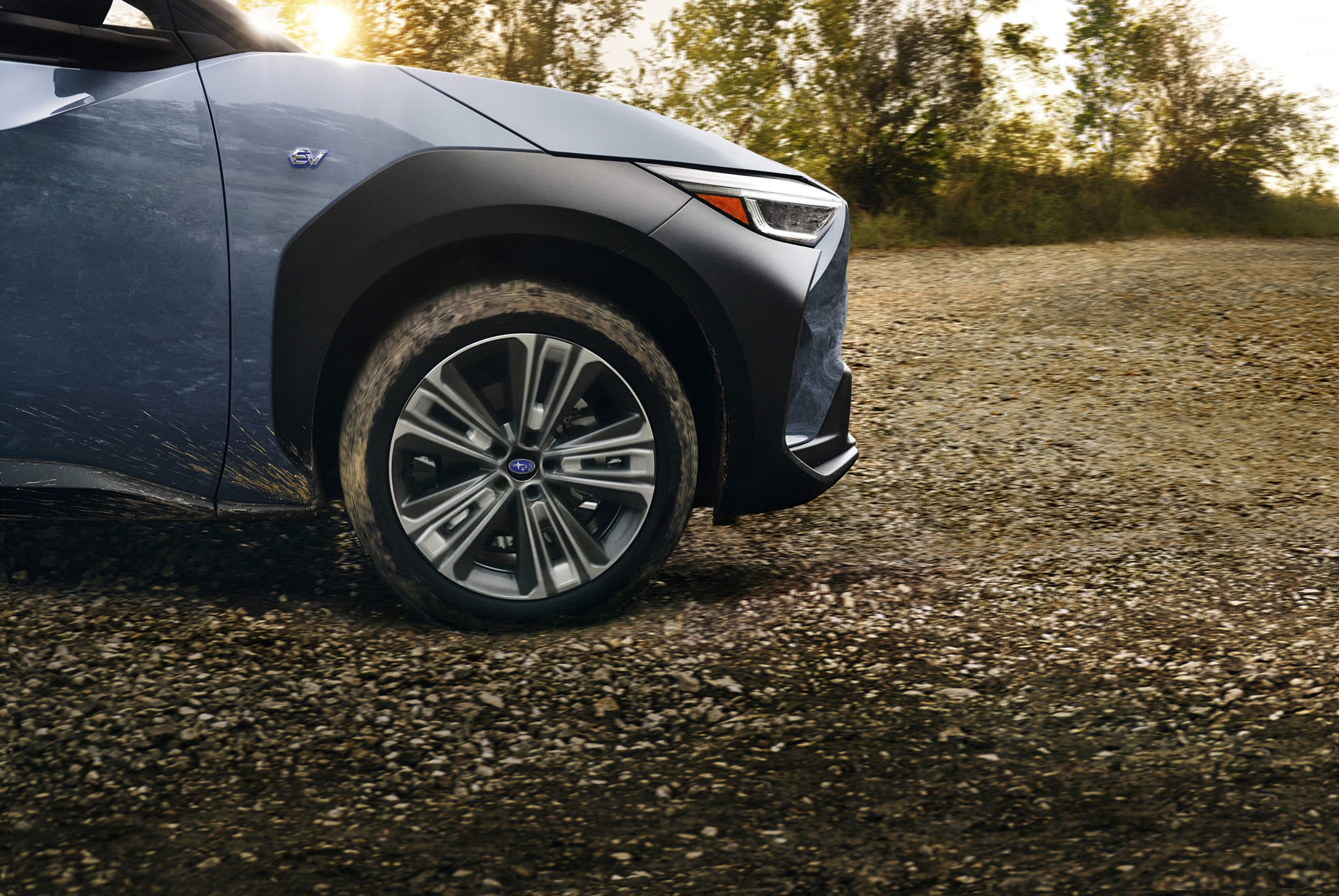 The 2023 Subaru Solterra EV will make its global debut at the 2021 Los Angeles Auto Show. Ahead of the event, Subaru took the time to tease its first battery-electric vehicle one last time. We get a glimpse of the crossover’s chunky black fender flares along with an EV badge denoting that this is an all-electric crossover. The angular headlights are also shown with Subaru’s trademark C-shaped LED daytime running lights. Based on the mud splatters and dirt on the tires, the Solterra appears to be on a trail having a good bit of fun. The front bumper, however, doesn’t appear to have much clearance, which could limit the Solterra’s ability to clear bigger obstacles off the beaten path.

Developed in cooperation with Toyota, the 2023 Subaru Solterra EV is the first vehicle on the e-Subaru Global Platform. This architecture is Subaru’s version of Toyota’s e-TNGA platform, which is highly customizable and can be tailored specifically to a specific brand’s needs. In this case, Subaru’s rugged heritage means the Solterra needs to have a good bit of off-road capability, resulting in the platform getting tailored for that and additional ground clearance.

Previous teasers of the Solterra showed off the car’s silhouette, which is similar to its sister vehicle, the upcoming Toyota bZ4x. Although they’ll have similar looks, the Solterra gets special design cues to distinguish it. These include C-shaped taillights that mimic the same pattern as the headlights. Inside, the Solterra features the same interior design as its Toyota sibling. The Solterra will be running the brand’s latest Starlink infotainment system instead of Toyota’s new UI, and it will also be the first Subaru to feature a fully digital gauge cluster. Don’t expect the yoke to make it to the U.S., though. We’re likely only getting a standard steering wheel on the Solterra.

The Solterra could be the next Subaru in the U.S. to get the latest EyeSight driver assistance suite, which augments the two forward-facing cameras with additional radar sensors for improved accuracy. This latest version first debuted on the 2022 WRX sports sedan and gets improved lane keeping, lane centering, emergency steering assist, and a front automatic emergency braking system that works at speeds of up to 50 mph.

On the powertrain department, the Solterra will likely get a dual-motor setup, effectively giving it AWD as standard. The battery pack is likely the same 71.4-kWh unit found on the Japanese-market bZ4x that Toyota recently showed and can DC charge at peak rates of up to 150 kW. That should allow it to get to 80 percent in 30 minutes. The dual-motor setup will likely make the same 215 hp combined as in the Toyota sibling, allowing it to hit 62 mph in 7.7 seconds. Toyota claims a range of 460 km or 286 miles in the WLTP cycle for the dual-motor bZ4x and, likely, the Solterra will also get the same rating. However, that could be lower in the more conservative EPA cycle.

The 2023 Subaru Solterra EV goes on sale in the summer of 2022. It will compete directly with the Volkswagen ID.4, Nissan Ariya, Hyundai Ioniq 5, Kia EV6, Tesla Model Y, and its sibling, the Toyota bZ4x. Subaru hasn’t revealed if it will limit sales of the Solterra to only specific states.