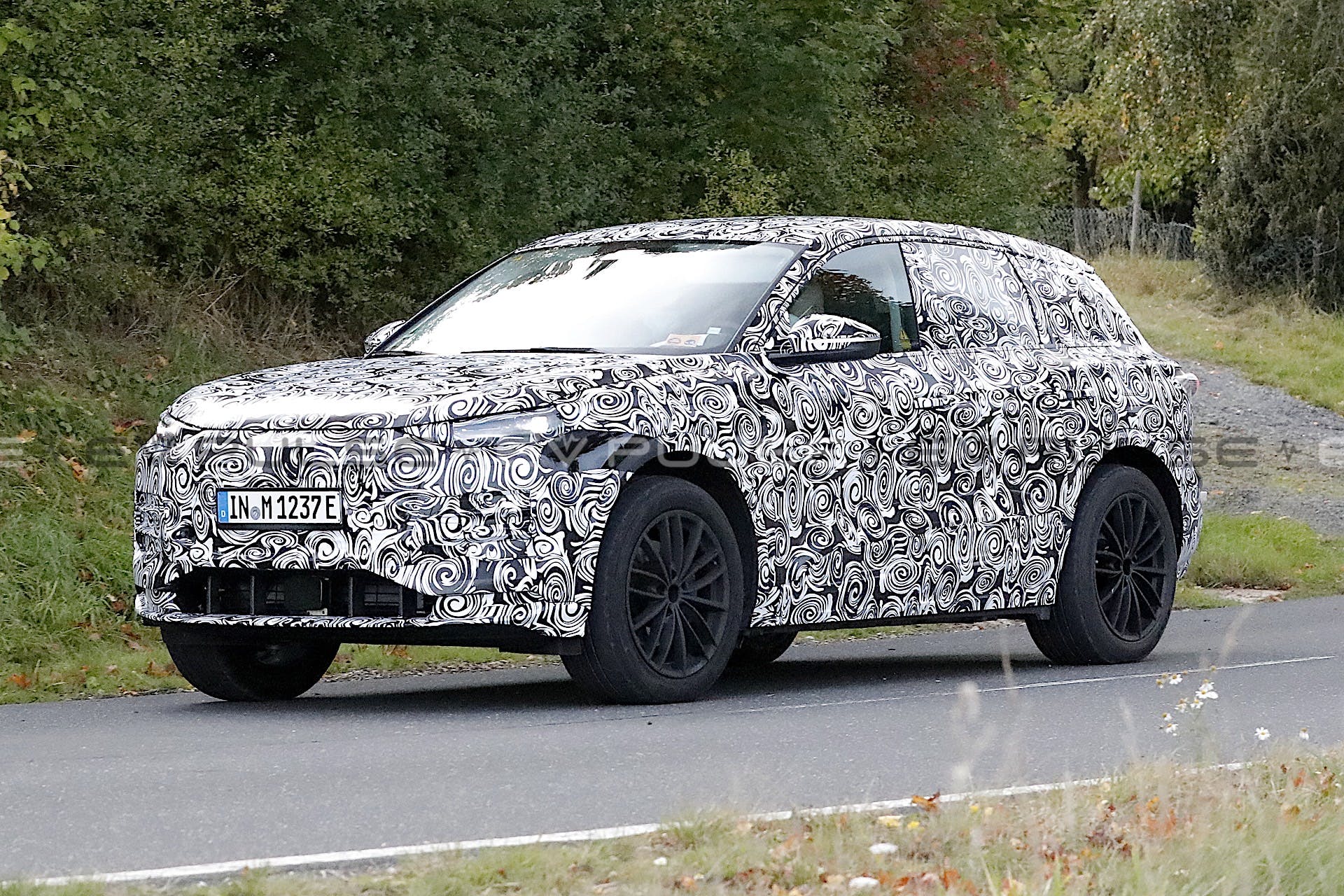 The next vehicle in Audi’s electrification offensive has been caught testing in the German countryside. Slotting between the Q4 e-tron and e-tron SUV, the 2023 Audi Q6 e-tron will be the first vehicle on the new PPE platform codeveloped with Porsche. Audi CEO Markus Duesmann confirmed that the Q6 e-tron will launch in 2022 and will be built in Ingolstadt where the company is building a massive battery plant to support its expansion.

Even with the swirly camouflage, it’s obvious that the 2023 Audi Q6 e-tron borrows a lot of styling cues from its smaller and larger siblings. The front end has hints of the Q4 but it appears to have been differentiated enough that it doesn’t simply look like a larger version. Audi’s corporate single-frame grille is still there and like in its current EV lineup, it’s been closed off. Like the larger e-tron SUV, the Q6 has an upright greenhouse and the rear hatch is more upright to give it a traditional crossover look. The taillight clusters, however, don’t appear linked together while the A-pillar is swept back more to give the crossover a sweptback, cab-rearward look.

Volkswagen Group’s PPE architecture will be a crucial component because it will give the Q6 e-tron 800-volt charging capability. That means it’ll be able to DC charge at peak rates of up to 350 kW, enabling the car to go from 10 to 80 percent in less than 30 minutes. New generation batteries are also expected to allow the Q6 e-tron to travel over 300 miles. A 590-hp RS model with two electric motors is expected to serve as the new range-topper. That version could also get rear-wheel steering and torque vectoring to help it handle better.

The Q6 e-tron won’t be the only Audi model to use the PPE platform. A sedan sized similarly to the A4 will also be on that architecture and is considered one of the most important upcoming models. Eventually, Audi will swap to the PPE platform on all but entry-level models. That means the successor to the e-tron and e-tron GT will be on PPE as will many other vehicles before they get replaced by the SSP architecture. The Q6 e-tron will be among the first two vehicles to use the PPE platform. It will be preceded by the Porsche Macan EV, which is expected to travel farther than the Taycan. Audi hasn’t revealed the size of the Q6 e-tron’s battery but we’re anticipating it to be somewhere in the neighborhood of 90 kWh or higher.

Slotting below the 2023 Q6 e-tron will be vehicles on the MEB architecture. The first of which is the Q4 e-tron in both SUV and Sportback flavors. Eventually, every Volkswagen Group brand, including Audi, will consolidate to a single platform: the upcoming SSP architecture. Audi and Porsche will be among the first to make the move. However, expect it to happen gradually with the first models transitioning being the larger and more expensive ones.

When it arrives, the 2022 Audi Q6 e-tron will be priced between the Q4 and e-tron models. That means it’ll likely start in the $50,000 range to split the difference between the entry-level model and the flagship crossover EV. Expect the Q6 e-tron to veer on the sportier end of the spectrum considering what its platform mate is and its positioning in the lineup.