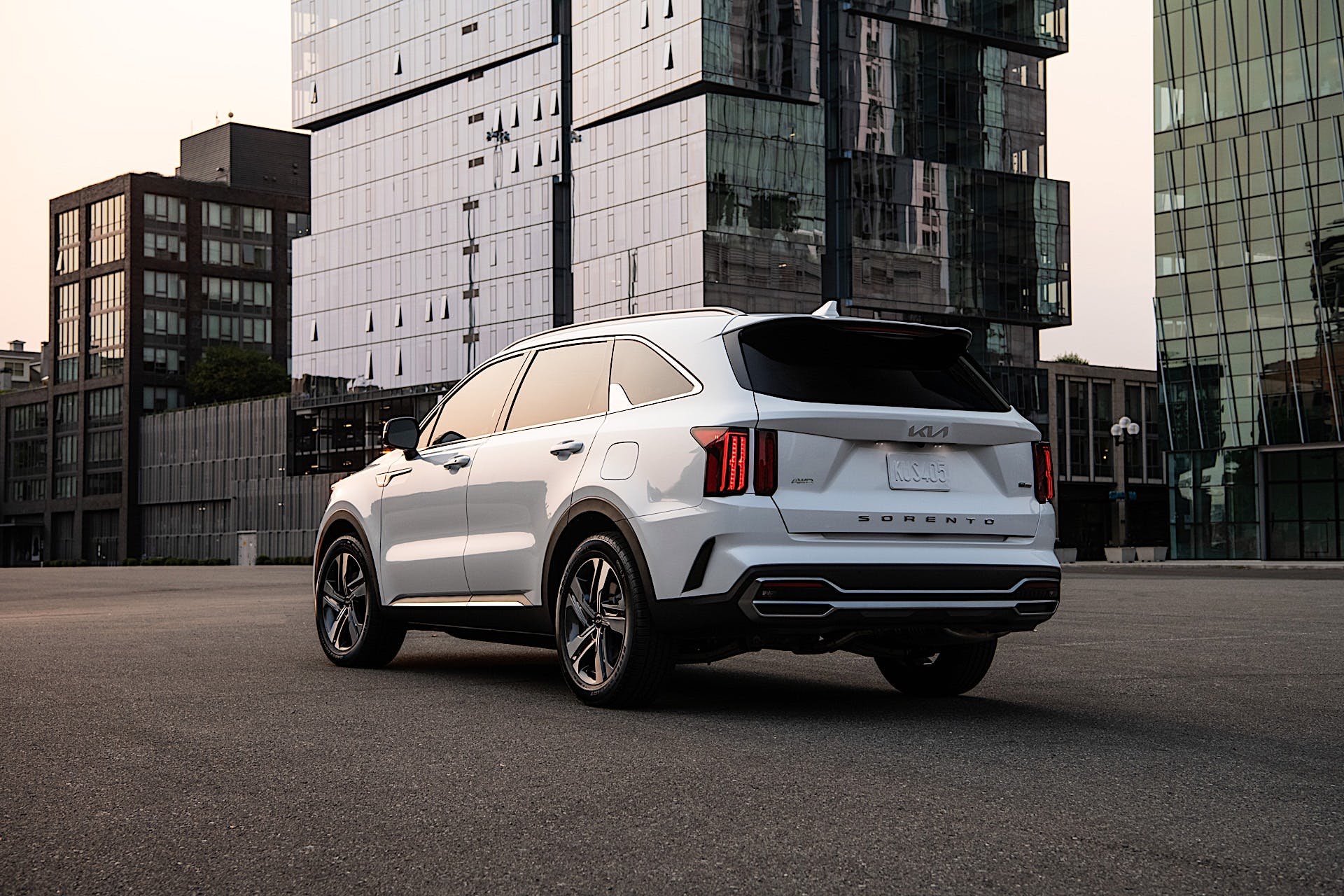 The 2022 Kia Sorento PHEV has been announced as the second electrified model in the lineup. Thanks to a larger battery and a more powerful electric motor, it gets more flexibility while offering more power and seating for six. Available in SX and SX Prestige grades, the Sorento PHEV sits at the top of the range and is a natural extension of the standard hybrid, which is offered only in S and EX trims.

Powering the 2022 Kia Sorento PHEV is the same 1.6-liter turbo-four-based hybrid system as the regular hybrid. This time, it gets a more powerful 99 hp electric drive motor and a 13.8-kWh battery mounted under the passenger compartment. The combined system output is 261 hp and 258 lb-ft of torque. Unlike its chief competitor, the Toyota Highlander Hybrid, the Sorento PHEV uses a conventional six-speed automatic transmission and a mechanical AWD system with a drive shaft linking both axles.

EPA ratings for the 2022 Sorento PHEV are 460 miles of combined range with a full tank and a full charge. In all-electric mode, the crossover can travel up to 32 miles per charge. When driven as a hybrid, the Sorento PHEV is rated at 35/33/34 mpg city/highway/combined. Charging the battery pack should take roughly two hours using a level 2 AC charger or around four hours with a standard household outlet.

Since it starts in the SX trim, the Sorento PHEV comes generously equipped with a long list of standard equipment. That includes full LED headlights, 19-inch alloy wheels, power front seats (10-way for the driver and 8-way for the front passenger), a 10.25-inch touch screen, built-in navigation, and the full Drive Wise driver assistance suite. Moving up to the SX Prestige gives you more creature comforts like ventilated front seats, a 12.3-inch digital gauge cluster, a Bose audio system, heated second-row seats, and a 14-way power driver’s seat with memory.

When it goes on sale later this year, the Korea-built Sorento PHEV will be the only mainstream three-row crossover with a plug-in hybrid powertrain. Consumers looking for one originally had to move up to the luxury segment where you can get the Volvo XC90 T8 and the Lincoln Aviator Grand Touring. Currently, the closest competitors to the Sorento PHEV are the Toyota Highlander Hybrid and the Ford Explorer Hybrid.

Next year, the Sorento PHEV will have a more direct competitor in the form of the next-generation 2023 Mitsubishi Outlander PHEV. That crossover will also offer three rows of seating as standard and promises to offer more power and longer range in EV mode versus its predecessor. Mitsubishi says that it will get a larger battery, which will likely be packaged under the passenger compartment just like in the Kia Sorento PHEV. The gas engine, likely a version of the standard Outlander’s 2.5-liter four-cylinder, will also be more powerful. However, we’re not sure if the total output will match or exceed the Sorento PHEV. One big difference will be the Outlander PHEV’s AWD system, which will retain its two-motor layout.

For now, the 2022 Kia Sorento PHEV stands as a class of one. If you’re looking for a plug-in hybrid three-row but don’t want to go up to the luxury segment, the Kia is your only choice when it goes on sale later this year. Pricing hasn’t been announced yet but expect it build from where the standard Sorento Hybrid topped off at around $38,000. A range-topping SX Prestige mode could cost you around $45,000 before the $6,587 federal tax credit is taken into account.