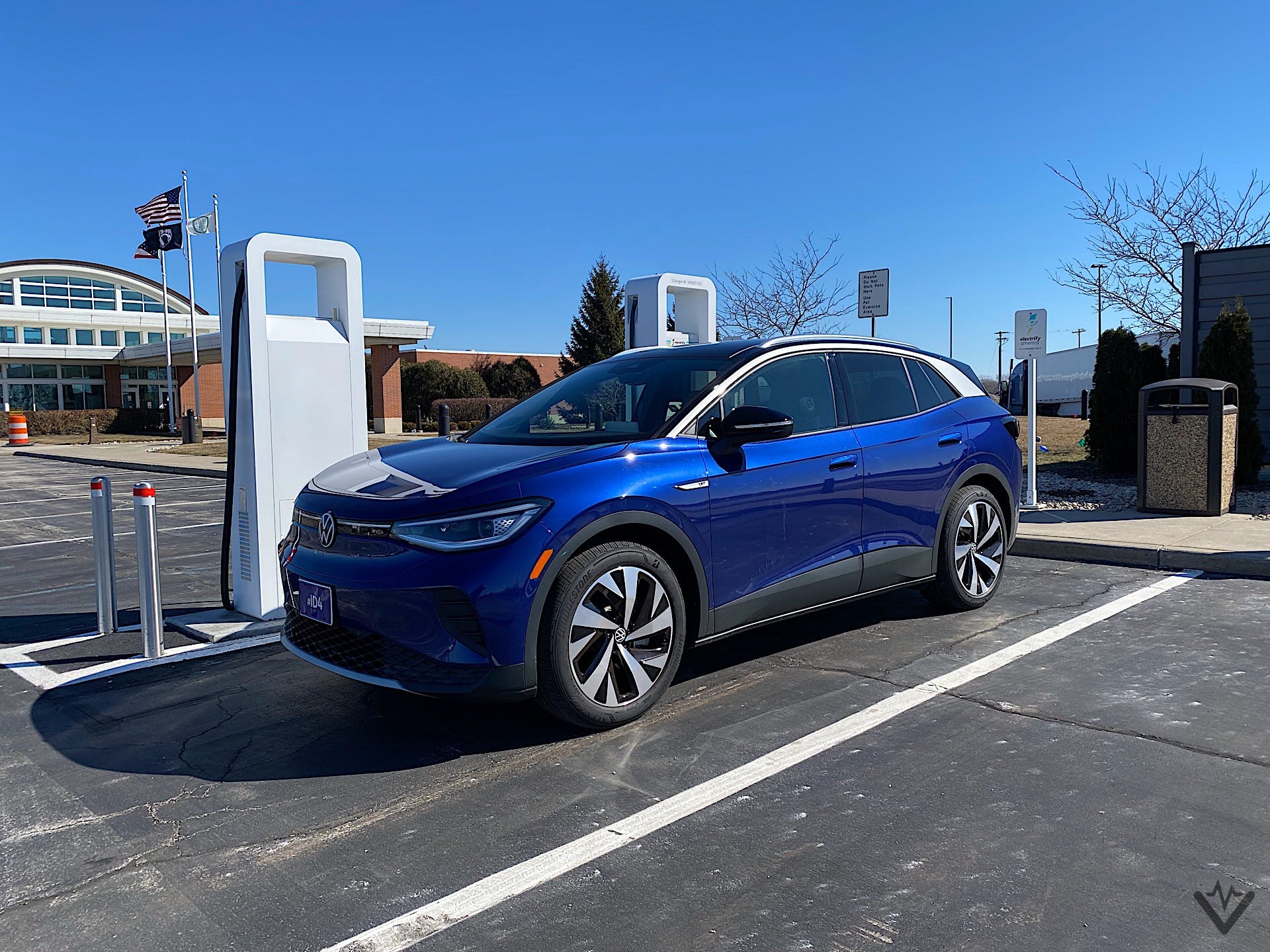 Volkswagen‘s new ID.4 electric crossover is the brand’s first attempt at a long-range, everyday car replacement here in the United States. With the first models having around 250 miles of range, that’s more than enough to cover the day-to-day grind.

But if you want to go on a road trip, you’re going to need to fast charge. Fast charging rates can vary wildly depending on vehicle, ambient temperature, charging station, alignment of Saturn, and so on.

Recently we were able to spend a short time in the new ID.4 and was able to drive it a bit. As a result of the driving we needed to do for the various coverage we needed, that means we had to DC fast charge.

CHECK OUT: VW taking new ID.4 on a road trip across the country

With an ambient temperature in the 30-degree range, we pulled into our nearest Electrify America charging station and plugged into a 350 kW max stall.

We had been driving for quite some time—- think an hour or more — on the highway so the battery pack should be nice and toasty for charging.

Volkswagen claims that the ID.4 has a peak charging rate of 125 kW. We started our charge session at 17% state-of-charge (SoC) and planned on running it until the charge rate dropped below 50 kW.

Ideally we would run it as low as possible and then run the whole range of charging, but we didn’t have enough time to run the car low enough to need a full charge while also running it enough to make sure the pack is warm in the low temperatures. We tried, but the results were suspect because of the station.

So anyway, here were are, sitting at a rest area on the Ohio Turnpike sucking up some free electrons thanks to 3-years of free charging with the ID.4.

The car quickly ramped up to 115 kW of charge. That’s the fastest rate we would get out of this station, on this day, into this charger. We’re actually pleased with that given the ambient temperatures.

At 50% SoC, the rate had dropped off to 88 kW, which is about where our long-term Model 3 SR+ is at when hitting this SoC. In warmer months it’s doing a bit better, but there’s drop-off by this point.

At 68% SoC, it’s grinding away at 65 kW. Keep in mind this rate is still better than the Nissan Leaf, which is capped at 50 kW most times due to CHAdeMO connections, and the Mini Cooper S E which just peaks at 50 kW.

At 75% SoC it’s at 62%. This is where it get impressive for us. By this SoC in our Tesla we’d be below 50 kW and already on our way to the next charging station. While not the peak rate, it seems VW’s charging profile is a nice mix of preserving charge rate while protecting the battery.

We hit 85% SoC before the car drops the charge rate to 50 kW. According to the Electrify America app, that’s 39 minutes of charge time for 52 kWh of energy delivered.

If we get the car in again for a longer period of time we’ll be more thorough with the testing, but initial results are good. Again, it wasn’t warm outside (though it also wasn’t the Arctic), but we were able to get close to peak for some time, and when things did taper off they tapered off slowly.

Remember, when charging, it’s not just what the car peaks at, but what it’ll sustain at. The ID.4’s sustained charging, at least at first glance, appears strong.