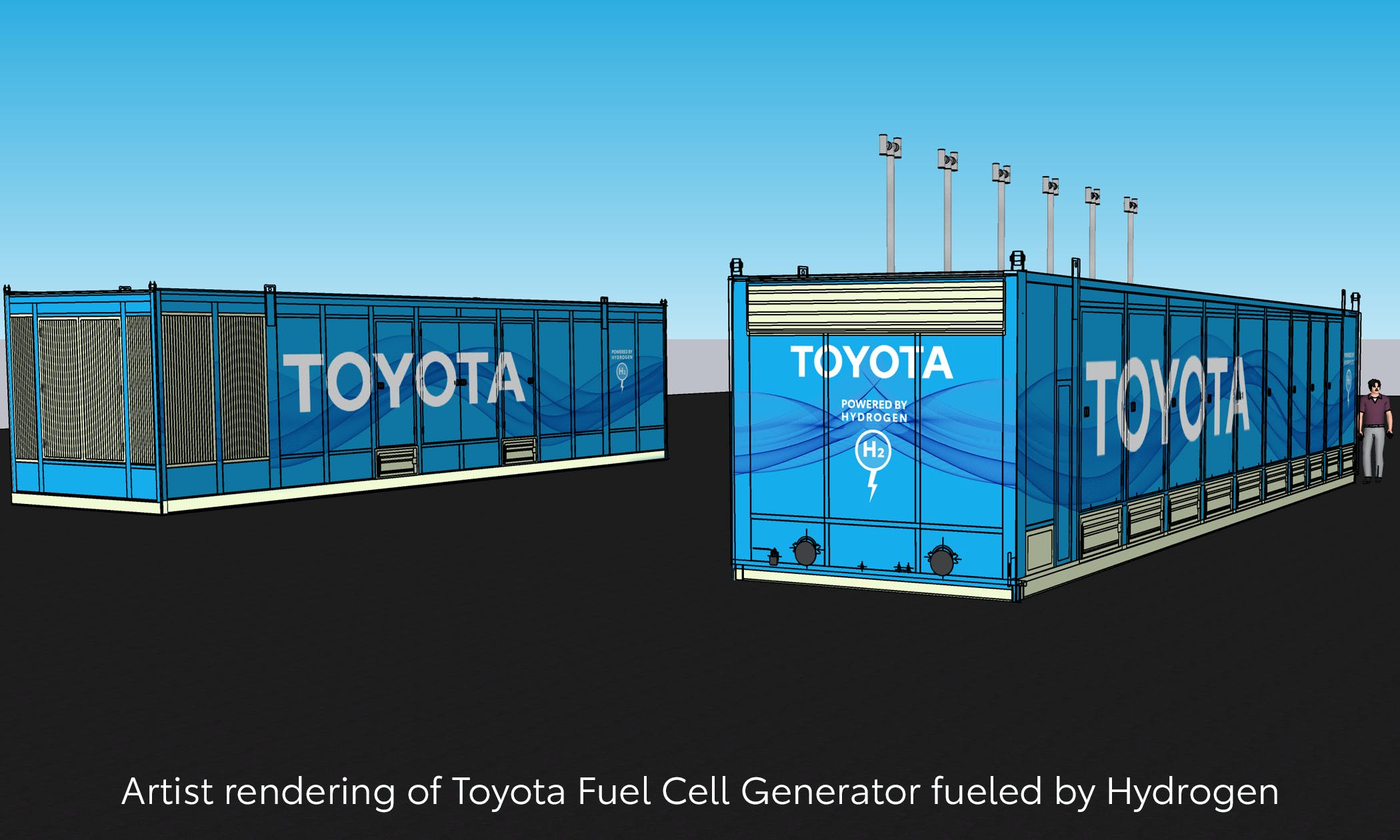 Hydrogen. It’s the most abundant element in the known universe, the lightest on the periodic table, and can go boom. While it doesn’t exist in the air we breathe (that’s 78% nitrogen, 21% oxygen), it’s essential to human life as it is part of the water we drink.

Using it as a power source for a vehicle is something that several automakers have been working on for awhile. Hydrogen fuel cells are currently powering Class 8 trucks at the Port of Los Angeles, and Toyota has a fleet of Mirai sedans running around Southern California powered by the gas.

It’s faster to fuel than charging an electric car, and is as safe as — or safer — than hauling around 20 gallons of gasoline.

The problem is there’s no real infrastructure for it. Companies are spending money working on ways to expand that infrastructure (including a new station that’ll be Michigan’s first at the American Center for Mobility in Ypsilanti), but EV charging infrastructure is for more prevalent.

Yet Toyota seemingly believes hydrogen is going to be “a thing.” We concede that it makes a ton of sense in Class 3 vehicles and larger, because the batteries you’d need to move that much weight around becomes too much, but we’re not completely convinced that a compact crossover will benefit from hydrogen.

But in addition to the current Mirai sedan and the Class 8 truck projects, Toyota is working on a much bigger use for hydrogen that isn’t sexy, but it is a big deal.

Toyota’s TRD team brought a hydrogen generator to Toyota’s recent Future Mobility Showcase, and despite everything the company showed EV Pulse while we were there, this generator has the potential to being a game changer.

As we’ve noted before, the power grid sucks in this country. We’ve also pointed out that the saviors of the grid aren’t going to be the power companies, but rather the companies that rely on the grid to work.

For example, what Ford is working on right now with Ford Pro and the V2L capabilities of its electric fleet is mind blowing.

While a fleet of electric vehicles can work as a great battery backup for your business, or even add stability to the grid, there’s still a finite amount of power available before the vehicles have to be slowly recharged.

A hydrogen generator doesn’t have that problem. It can be refueled quickly — as long as there’s infrastructure available — and can quietly power the grid when it needs stabilization. It’s a heck of a lot cleaner than a diesel generator.

Additionally, a hydrogen generator makes a ton of sense anywhere you’d need a diesel generator. If you just built a warehouse and you’re waiting for the permits to come through for the EV charging stations you need and the power company to come run the lines, you can use one of these generators.

Work in a mine? You can’t use a diesel generator in there, but you can use a zero emissions hydrogen generator.

GM is working on something similar with its Hydrotec system, and we’ve spoken with companies that are creating portable power stations out of large battery packs.

Ultimately Toyota tells us that it imagines that it would become a supplier for companies that build generators to offer hydrogen-powered solutions.

But regardless of whether they supply another manufacturer or go it alone, portable reliable power is about to become a BFD. Not only will it help in providing power where its needed, but it can be used as a way to balance out the grid as more and more electric vehicles come online.

The company recently announced that it’s deploying a megawatt scale generator for the Department of Energy’s NREL, which is a ton of power.

This segment is about to get huge.