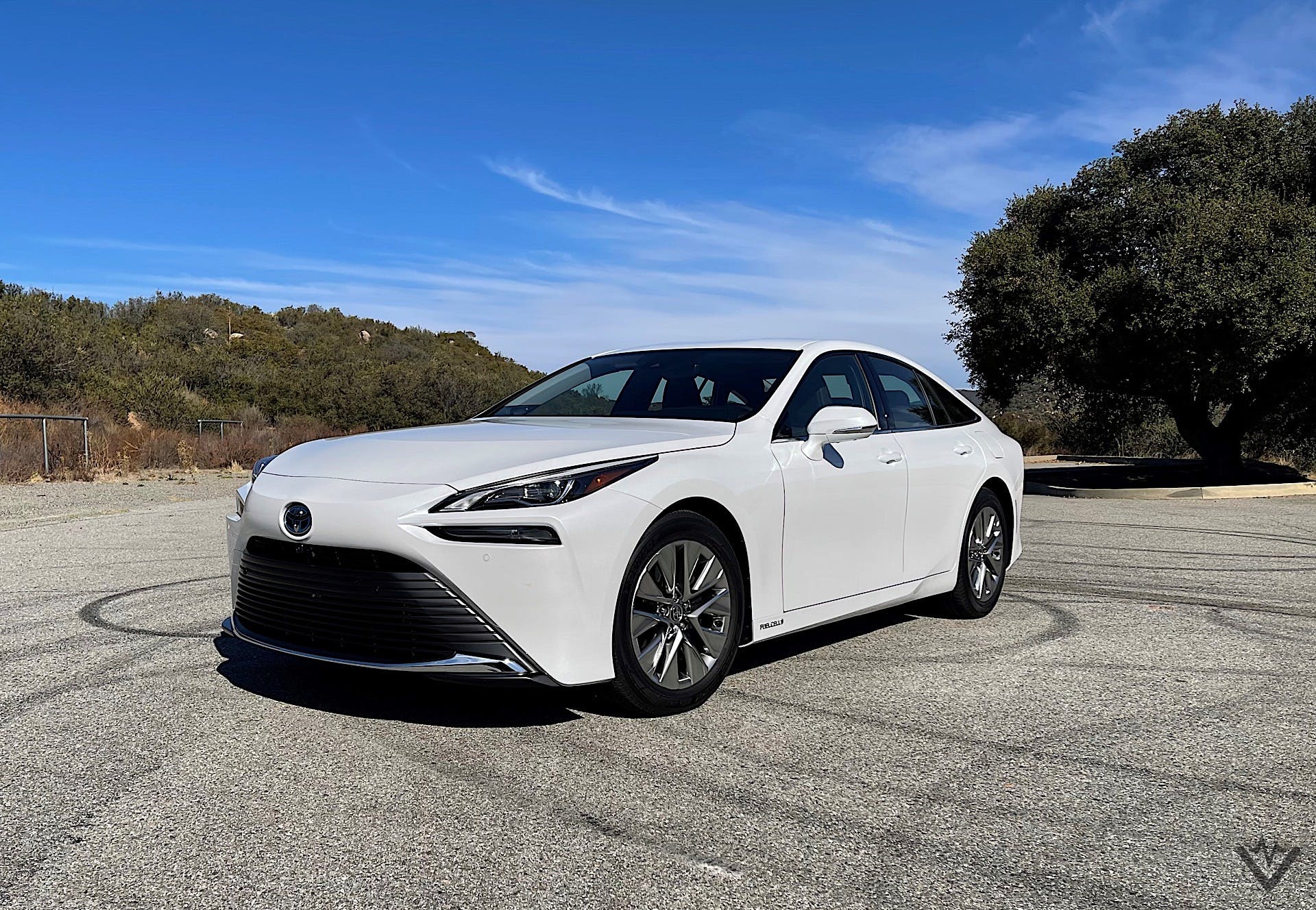 When the first generation Toyota Mirai arrived, it immediately became a pioneer as one of the first production hydrogen fuel cell vehicles. The way it looked stood out too; it’s like the automotive version of Darth Vader complete with the requisite futuristic noises. Sure, that helped the Mirai stand out but in a way that made it seem like you were piloting a spaceship.

Now, the second generation 2021 Mirai has arrived and boy did things change. This once quirky sedan has evolved into a looker, one that will turn heads everywhere it goes.

One look at the 2021 Toyota Mirai and you’ll immediately notice the svelte profile. The sweeping roofline, cab rearward greenhouse, and short rear deck lid give the car a coupe-like profile, something you don’t expect from an eco-focused sedan. You get a two-tier headlight design and a massive grille that allows air to enter the fuel cell stack to react with the hydrogen, creating water and electricity. Out back, the car features a full width taillights design accentuating the Mirai’s width.

Size-wise, the 2021 Mirai is similar to an Avalon except in width where the latter is over an inch lower and narrower. In comparison to the outgoing Mirai, the new model is 3.3 inches longer, 2.7 inches wider, and 2.6 inches lower. The current-generation Toyota Camry is 3.7 inches shorter, 1.8 inches narrower, and 1.0 inch lower.

Get inside the 2021 Toyota Mirai and you’ll easily mistake it for a Lexus because of how luxurious it feels. Everything you interact with exudes quality and nearly every surface is covered in some form of padding or soft surfaces. Buttons and knobs operate with a satisfying tactility, contributing to the upscale ambience befitting a Toyota flagship vehicle. If only there was more sound insulation. There’s notable amounts of wind noise at highway speeds, detracting from an otherwise vault-like environment.

Toyota’s latest infotainment system is much improved versus older iterations. The 12.3-inch touch screen is responsive and highly customizable. Apple CarPlay and Android Auto take up 75 percent of the display while the other 25 percent is used by the native interface to show things like driving data, power delivery and music. The 8.0-inch digital gauge cluster works well too, offering clear information and easy access to driver assistance settings.

If there was one weak point in the Mirai’s interior, it would be its lack of space efficiency. There are belts for five passengers but in reality, only four will be comfortable. A massive center hump intrudes into the rear seats, forcing the center occupant to straddle their legs. The low-slung roofline also cuts headroom in the back, meaning your tall friends better call shotgun fast.

Small item storage is at a premium, as well; you get two small cup holders on the center console, a shallow bin behind it, and a wireless charging pad that barely holds a modern mobile device.

The best description for the Toyota Mirai is that it’s a touring sedan that happens to be powered by a fuel cell. A well-tuned suspension makes road imperfections disappear as if they weren’t there, giving the car supreme comfort and isolation levels. You don’t lose out on handling thanks to the car being underpinned by the GA-L architecture shared with the Lexus LS.

Despite weighing over 4,000 pounds, the Mirai moves like a smaller vehicle that willingly turns into corners. Good body control keeps the car feeling confident, as it gently transfers weight from one side to the other. The biggest highlight is the Mirai’s accurate steering; point the car toward your intended path and it’ll go that way without hesitation.

No, the Mirai isn’t a sports sedan. It’s a confident cruiser. Toyota would need to put stickier tires, quicken the steering, and add a more powerful electric motor to meet the performance requirements of a sports sedan.

Speaking of the powertrain, the Toyota Mirai gets more horsepower but slightly less torque. At 182 hp and 221 lb-ft of torque, the electric motor is up 31 horsepower but down 26 lb-ft. The 1.6-kWh nickel-metal-hydride battery that works as a buffer between the fuel cell and electric motor has been replaced by a smaller, lighter 1.24-kWh lithium-ion unit, allowing you to easily replenish it via coasting.

You’ll notice the Mirai’s RWD roots because you get the sensation of being pushed instead of pulled when accelerating. While the car never feels winded when going up a hill, passing or merging with traffic, don’t expect to get pushed back into your seats when you mat the accelerator. Due to the Mirai’s curb weight, it accelerates in a more relaxed manner despite the electric motor’s instant torque. Yes, it gets moving promptly, no it’s not trying to be a Tesla in Ludicrous mode.

When it’s time to stop, stepping on the brakes won’t jerk you around. Transitions between the regenerative to mechanical braking are imperceptible allowing you to stop smoothly consistently. Even if you need to stop suddenly, the car won’t get jumpy and throw your forward. The firm pedal feel lets you gauge how much stopping power you’re adding, meaning you don’t need to guess how hard you need to mash it just to get the right amount.

Toyota’s Safety Sense 2.5 is the best iteration of the brand’s driver assistance suite to date. Adaptive cruise control accelerates and brakes smoothly even in traffic and it’s distancing is no longer too conservative, meaning no one can cut you off when you’re in the closest setting. Lane keeping assist traces lane lines accurately, especially on well-marked roads. You’re no longer getting bounced back and forth between the lane dividers nor does the car re-center you in a jerky fashion. With adaptive cruise control active, the car will even take gentle turns on its own — as long as you’re guiding it, that is.

The example we drove was a 2021 Toyota Mirai XLE equipped with the Advanced Technology package. Prices start at $50,455 for the base XLE trim including destination or $66,955 for the range-topping Limited trim. Adding the Advanced Technology package adds $1,410 to the XLE grade’s price tag. The available 20-inch alloy wheels cost $1,120. There’s an $8,000 federal tax credit plus state incentives depending on where you live. Currently, the Mirai is only sold in California.

Toyota’s latest Mirai is a move toward the right direction. The car is approachable; nothing feels intimidating and the driving experience adds a sense of familiarity despite the complexity under the skin. Add head-turning design plus the general rarity of FCVs and you have a highly exclusive sedan. Sure, the Mirai isn’t for everyone but for those who can make an FCV work or have access to a nearby hydrogen station, this Toyota flagship brings a lot of goodness to the table.