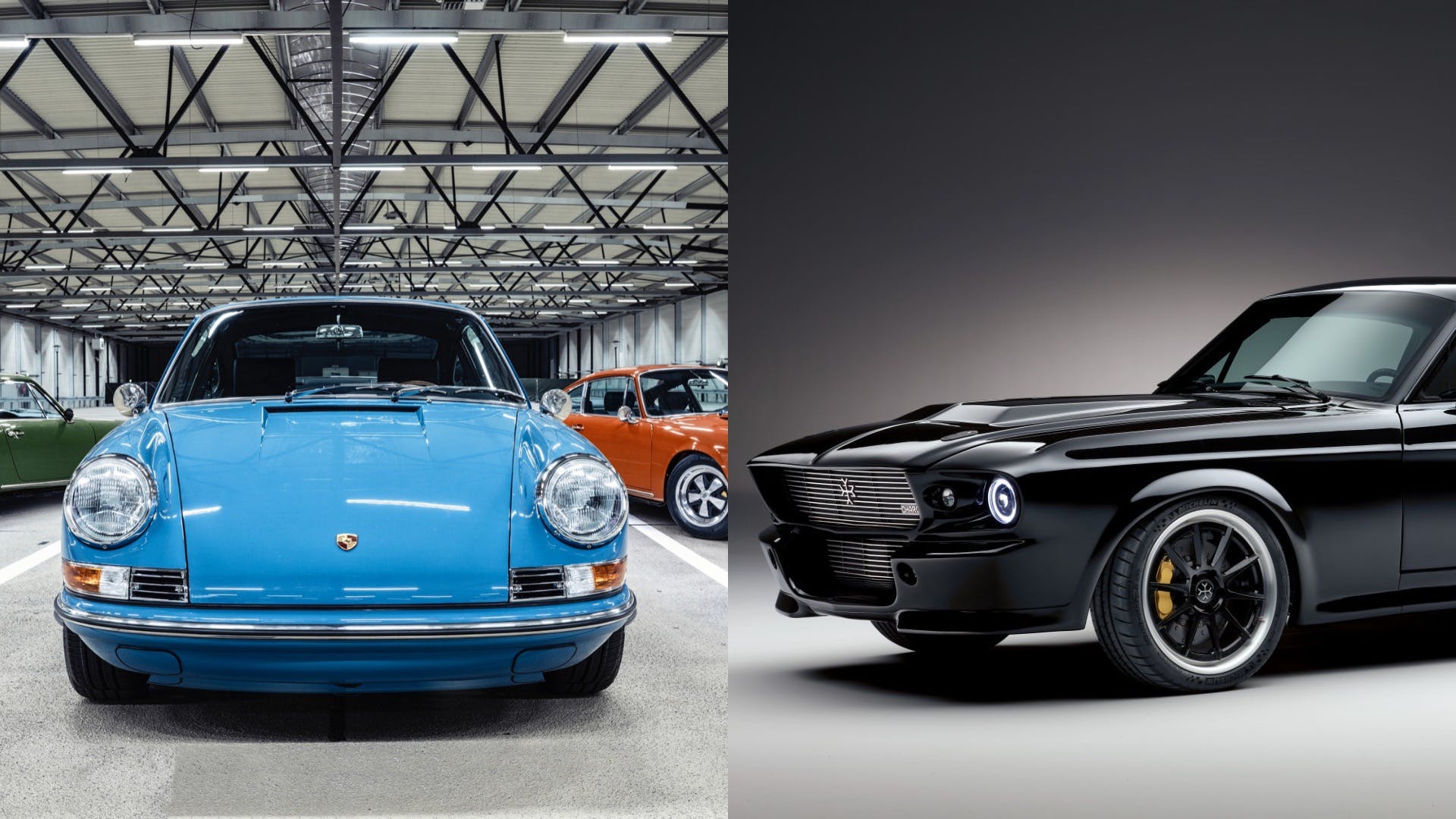 Some automotive enthusiasts love new technology and electrified power plants while others prefer the old-school identity and style of retro rides, but there is a growing intersection of these passions.There are a growing number of boutique shops restomodding vehicles, which is to say they’re updating old-looking cars with modern tech. Here’s a shortlist of unique-looking vehicles with plenty of electrons beneath their old-school sheet metal.

While many enthusiasts may know of the old-school 911s re-imagined by Singer Vehicle Designs, few have heard about Voitures Extravert, which turns old ‘70s and ‘80s 911s into EVs. Though based in the Netherlands, the quintessenza SE and TE from Voitures Extravert are a global effort, with the donor vehicle stripped down and rebuilt in Germany (with updated parts, new undercoating protection, and a repaint) while the control system and hardware are designed in California, then all are united in the company’s home base in the Netherlands.

A 59 kWh electric battery feeds a single electric motor in the vehicle. With a peak of 258 horsepower and an incredible 700 pound-feet of torque, the quintessenzas manage to hit 60 MPH in less than six seconds and still feature a curb weight under 3,000 lbs. The top speed is rated for 112 mph, however. The range is approximately 250 miles, and some fast charging options are available, depending on your location.

However appealing the Voitures Extravert quintessenza models are, they’re pretty pricey, with a starting price of around 300,000 euros. There are some ways of importing vehicles to the US, but rules vary from state to state.

Electric conversions aren’t just for sports cars. If you dig off-road-oriented SUVs like the original Land Rover Defenders and Ford Broncos, then you should check out Zero Labs, which converts such trucks into electric-powered icons. While every vehicle Zero Labs creates is essentially bespoke, the conversions feature an 85 kWh battery at the very least, with a range of 200 miles, though there are options for larger batteries up to 100 kWh and at least 235 miles of range. While base conversions feature a 300 horsepower motor powering the rear wheels, buyers can double up and get an additional 300 horsepower motor for the front axle, making for a huge improvement over the originals. The vehicle even features DC fast charging. Beyond the powertrain, Zero Labs also updates the suspension, brakes, seats, paint, and more. The company even features vegan leather for the upholstery.

But the real magic going on at Zero Labs is that they are developing an entire electric platform to make conversions and restomods easier. The platform should be able to work not just on classic 4x4s, but pickup trucks, muscle cars, and even sports cars. The Zero Labs even proposes a 30-day transformation time, ensuring a relatively quick process to go from combustible to electron-powered classic. The full details of the new EV platform are expected to debut later this year.

Electric GT is a company that helps complete restomods with their e-Crate System and eGT systems, which integrate everything needed for an EV conversion. The e-Crate systems are designed to be plug-and-play and can be installed without being a certified electrician. The company estimates it takes about 50 hours to install its 413 e-crate system, which is designed to replace an LS series V-8 engine. You can even use OEM or aftermarket motor mounts.

This kind of system is a perfect fit for an old Mustang or Camaro, and though the power number seems low at just 240 horsepower, the 350 lb-ft of torque will be impressive. Additionally, these e-Crate Systems can still use a manual transmission.

Part of the e-Crate includes a 25 kW battery, but Electric GT’s system is modular, meaning you can add additional battery capacity as needed in your project. There are different sized e-Crate motors available, so if your classic uses a straight-six, or four-cylinder engine rather than a V8, Electric GT should have an option for you. These options start at $65,000

When Ford called its latest EV a Mustang, enthusiasts everywhere groaned at the automaker butchering the goodwill of the nameplate built up over many generations of stylish, cool coupes. To some die-hards, a four-door hatchback doesn’t seem like the right fit for the Mustang name, especially in comparison to what Charge Automotive is offering.

Using an officially licensed shell of the 1960s era Mustang, it’s hard to mistake the Charge Automotive Mustang for anything else. The British company has a limited run of these EVs, pairing the jaw-dropping design with electric components from supplier Arrival. They’re capable of 200 miles of range thanks to a 64 kWh battery, pack an all-wheel-drive layout, and can hit 60 MPH in just 3.9 seconds thanks to over 500 horsepower and 1,100 lb-ft of torque.

In addition to the electrical bits, this Mustang receives an updated interior and digital cockpit with a massive touch screen. The company spends a lot of time showcasing its history, development, and employees in Medium posts. The team includes a few former McLaren and NIO employees, which says a bit about the company. As for this Mustang, only 499 are available, and each one carries a £300,000 asking price.

While Volkswagen is hard at work reshaping its lineup with electric vehicles to make you forget all about Dieselgate, the folks at Zelectric seem to have beaten them to the punch. Did you want an electric Beetle? Zelectric offers one. How about an electrified Volkswagen microbus? They have that too. They even make EV versions of the VW Thing and Karmann Ghia. While Zelectric does sell fully converted vehicles, it’s always easier if you have the original vehicle yourself first, then send it their way for conversions.

Due to the various sizes of the different vehicles, they each have different specs, but most use Tesla components. For example, in the groovy Microbus conversion, Zelectric managed to stuff a 32 kWh battery in there, good for about 85 miles of range. In other vehicles, like the smaller and lighter Karmann Ghia of Beetle, you can expect at least 100 miles. Zelectric doesn’t just retrofit the power plant, but also includes upgraded LED lighting, additional sound insulation, and can even equip the old ride with Bluetooth.