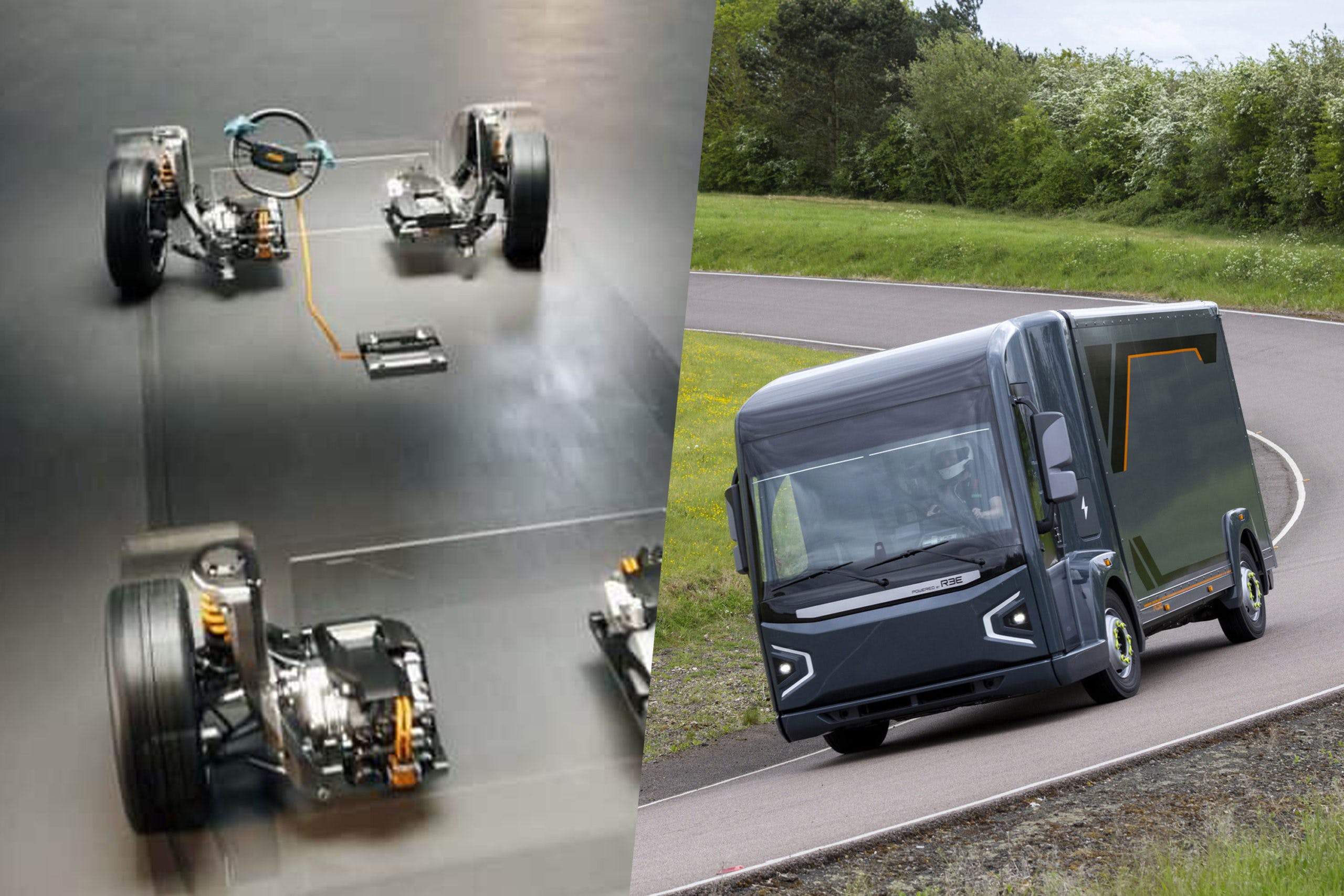 It seems like practically every automaker and supplier company is developing some sort of all-electric skateboard chassis, with drivetrain components at each end, the bulky battery pack in the middle and a mostly flat floor to maximize interior volume. This configuration is practical and makes all the sense in the world, but Israeli firm REE Automotive shows there’s still room for improvement.

Founded about 10 years ago and headquartered in Tel Aviv, with a production and engineering center in the UK and another facility in Austin, Texas, “Ree is an EV company, but we’re slightly different from the rest,” said Daniel Barel, the company’s CEO and co-founder in an interview with EV Pulse. They’re focused on building all-electric commercial vehicle platforms from Class 1 to 6; other, established companies will handle building the bodies and cabs.

“Our philosophy is to complete, not compete,” said Barel. Like the stickers that used to come on Windows PCs years ago, he said they want to be the “Intel Inside” for the automotive space. A huge range of different vehicle sizes, shapes and types can be manufactured by partner companies, “[And they] will be powered by REE, exactly like ‘Intel inside.’”

What sets REE Automotive apart from rivals – and provides some unique benefits – is the company’s ingenious modular drivetrain system called the REEcorner. These all-in-one assemblies contain just about everything needed to propel and control a vehicle, from the drive motors and steering actuators to brake assemblies and more. With the REEcorner, “There are no mechanical connections between the steering wheel and the pedals to the wheels,” explained Barel. All of that is handled via their X-by-Wire control system, with plenty of redundancy baked right in.

Ensuring safety, two motors at each assembly control vehicle steering. There are multiple CANs and two microcontrollers in each ECU. The software side is fully backed up as well. If something goes wrong, “[The] system knows how to compensate in those matters,” said Barel, “The other corners will step in.” If a module fails, the remaining three can still steer, drive and brake, with the computer controls making appropriate adjustments.

In the unlikely event of a catastrophic malfunction, say a steering actuator fails and leaves a wheel sticking out at an angle, the vehicle can compensate and, at the very least, allow the driver to limp to safety, to get off a busy highway. REE Automotive’s software is also smart enough to predict future maintenance. It knows if A happens, B could occur soon after, followed by C and D. Barel noted, their software can connect these dots and inform fleet operators that service is needed at the next maintenance interval or possibly even sooner, such as the end of the day when a vehicle returns to its depot.

Housing all major drive components in modular REEcorner assemblies enables several huge advantages over competing electric vehicle chassis. For starters, with everything pushed out to the edges, you get even more interior volume, something delivery companies like Amazon, FedEx and UPS are sure to appreciate. Beyond that, Barel said “we’re not using hub motors,” which can have issues with durability and they tend to increase detrimental unsprung mass, which is never good for ride and handling. In the REEcorner, heavy componentry like the motors, actuators and computer hardware is all attached to the chassis and protected from damage by the body. Next, Barel said that with an independent motor at each corner you potentially get four times as much regenerative braking, so you can get away with having smaller battery packs, which saves money as well as weight. And finally, serviceability is another enormous win for this technology.

“There are no spare parts,” Barel said, “It’s like an F1 pit stop.” If something major fails in the field and a vehicle is undrivable, a crew can come out and replace the defective or damaged REEcorner right on the side of the road in one hour flat. Mechanically, Barel explained it takes a mere 20 minutes to remove and reinstall one of these assemblies and then roughly 40 minutes to bleed the brakes and perform required software checks. Nobody else in the industry can match this level of serviceability.

CHECK THIS OUT: Mazda’s rotary finally returns, but it’s in a PHEV

Damaged or broken REEcorners are serviced or rebuilt as needed, so they’re ready the next time a vehicle has trouble. “Think about how easy it is to stock parts,” said Barel, because you basically don’t have to, which should be music to fleet operators’ ears.

Beyond enhanced serviceability, the REEcorner also improves safety and vehicle agility. Since each assembly can steer independently, it’s very simple to engineer a vehicle with four-wheel steering, a feature that improves handling, reduces the turning circle and supports torque vectoring for greater control in adverse conditions. Four-wheel steering is ideal for larger vehicles, but it’s not mandatory. With the REEcorner, smaller delivery trucks and vans can have conventional front steering if desired.

Depending on vehicle class, the REEcorner supports a range of different suspension setups, like unequal-length control arms, MacPherson struts and others. On their P7 platform, which is intended to power commercial vehicles from Class 3 to 5, Barel said they implemented a double-wishbone design for durability, a configuration that is also symmetrical, “The corners are identical left to right, front to rear.” This means any assembly can be swapped to any corner of the vehicle, further improving serviceability.

For the most part, REE Automotive plans to offer all-electric platforms; bodies will be supplied by other firms. “There are great companies that do that very, very well,” noted Barel, so there’s no need for them to get involved in that part of the business. In certain applications, however, they will offer vehicles with a cab, but third parties will still have to add the box behind the driving compartment.

You can’t buy a REEcorner-equipped vehicle just yet, but the company has built production-intent prototypes. Throughout the year, however, Barel said, “We’re ramping up … the plant is already in the final stages in the UK.” Once up and running, this facility will have the capacity to build 10,000 vehicles annually, which should be enough to satisfy global demand, at least initially. Production should begin in the second half of 2023, but Barel cautioned they are not rushing to market because the last thing they want are any recalls.

Unfortunately, there’s no pricing information to share, but from a cost-of-ownership standpoint, REE Automotive-based products should be very competitive with other all-electric rivals and miles ahead of combustion-powered vehicles.

“We’re in the commercial vehicle space, so we are very price sensitive in that market,” noted Barel. Their products are engineered to take a beating and work harder than anyone else’s. REE Automotive’s goal is to deliver all that while meeting target prices. “And honesty, this is what I’m really proud of,” he said.