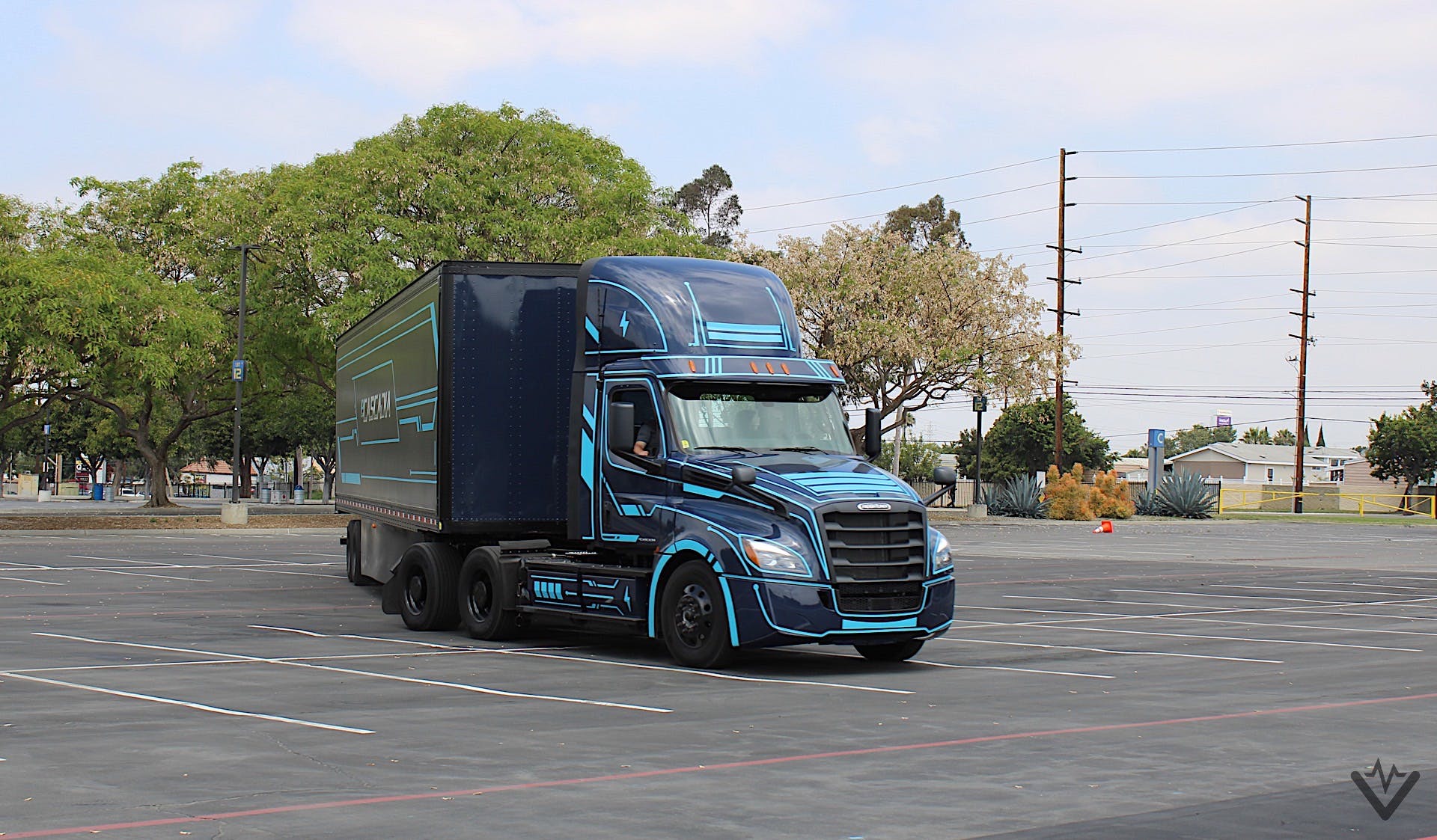 Electrification is upon us and Freightliner is at the forefront in the commercial vehicle sector. Daimler Trucks North America has added battery-electric commercial vehicles to its lineup and is giving businesses the option to move to clean mobility. The eCascadia and eM2 are aimed at two different missions and are now undergoing trial runs within fleets in California. The company has also started building delivery van frames and school buses, the latter of which is built by Daimler subsidiary, Thomas Buses.

How do these electric Daimler Trucks drive?

We got a chance to drive four different prototypes on a closed course and found that electric powertrains all gave them a smooth effortless feel. Even on a semi-truck like the eCascadia, the battery-electric powertrain allowed it to move without much fuss and you didn’t get any of the lurchiness or shift shock associated with traditional internal combustion powertrains. The production eCascadia will get a two-speed transmission instead of the single-speed equipped on the prototype.

The eCascadia can travel up to 250 miles per charge with a battery size of up to 475-kWh. The smaller eM2 is good for 230 miles and can be equipped with a battery of up to 315 kWh capacity. Thanks to the battery mounted as low as possible, you can tell most of the weight is right under you. Over the bumpy parking lot that the closed course was set up on, neither truck felt tipsy even when subjected to multiple bumps.

When it comes to charging, the eCascadia and eM2 require a level 3 DC charger. The eCascadia takes around 90 minutes to get to 80 percent in ideal conditions while the eM2 takes under an hour for the same charge. Overnight charging takes around six to seven hours on the eCascadia. Brake energy regeneration is applied based on the type of work the vehicle is intended to perform. In the eCascadia and the walk-in delivery van, there are three levels for you to choose from, allowing some degree of one-pedal driving. The Jouley school bus, on the other hand, uses a blended braking system instead. Freightliner will offer EV charging solutions for its customers including a standard overnight 60 kW charging. Faster chargers will also be available.

The Thomas electric school bus called the Jouley, is good for 138 miles on a charge using a Proterra 226-kWh battery. Along with the walk-in delivery van, which has 170 miles of range using the same battery unit, both vehicles have been developed specifically for in-town duty. Both moved silently without much drama; all you hear was the electric motor coming to life with a subtle whine even when on the move. Like in the eCascadia and eM2, the school bus and delivery van’s batteries are mounted low to keep the center of gravity down. Both vehicles felt more stable and didn’t have the tipsiness you expect out of what are boxes on wheels. The rear-mounted e-axle on the walk-in delivery van integrates the electric motor with the differential so that there’s no need for a drive shaft. According to Daimler, that improves efficiency, reduces complexity, and improves range and overall efficiency. The school bus, on the other hand, uses an electric motor and a two-speed transmission. You can’t tell that it has another gear while driving even when you put your foot down because it’s so smooth in operation.

Working with the customer

Freightliner’s development of electrified commercial vehicles focuses on the importance of collaborating with its customers during development. According to the manufacturer, their clients will be the ones using the vehicles for their business needs and their input is critical in making key changes to the eCascadia and the rest of Freightliner’s all-electric offerings.

Each vehicle has been designed specifically to meet specific missions. The eCascadia, for example, was developed for regional and local routes like from the port of Long Beach to destinations in San Bernardino and Riverside counties. Most of the trips being made by companies testing the eCascadia and eM2 are under 150 miles. The trucks do a quick charge before leaving again so that they can do more shifts per day.

For Freightliner, having customers use the electric trucks and semis in their customers’ operations is key. Since the vehicles will be on the road for the clients, their feedback on the prototypes is taken into account during the development stage. To date, the eCascadia and eM2 have driven well over 800,000 miles in fleet operations. By the time the two vehicles go into production, they’ll eventually accumulate over 1 million miles and plenty of valuable input from customers.

The walk-in delivery van was developed as a support vehicle and to maximize usability. Freightliner representatives note that these vehicles do about 100 miles per day, hence why it was built with a range of 170 miles per charge. With their most case usage being pickup, delivery, and as maintenance vehicles, that gives customers additional wiggle room for range or use the vehicle as a generator for their power tools.

The big take-away from driving Freightliner’s electric commercial vehicle lineups is that electrification has a lot of benefits in fleet use. There’s less wear and tear because the trucks and vans aren’t needing to use brake pads as much and the electric powertrain doesn’t have many maintenance items. As a result, companies spend less money keeping their fleets in top shape, especially when you consider the fact that EVs don’t need oil changes.

Even during heavy use, high-wear components like brakes are lasting longer to the point that some of Freightliner’s customers aren’t replacing them until nearly 100,000 miles. And that’s on a walk-in delivery van doing routes that do 127 stops per day. Even in some cases, brake life doubles or triples thanks to the electric motor’s regeneration, which doesn’t cause wear.

For commercial fleets, the vehicle’s cost over a long period matters more than the price to buy it. These vehicles are paid to be on the road and their long-term operating costs are more important. As a result, electrifying the commercial sector brings significant benefits that go beyond just lowering upkeep for the companies using them. They can get vehicles suited specifically for their needs that don’t emit anything, allowing for sustainable operations.

From an environmental perspective, electric commercial vehicles make a bigger impact in lowering harmful emissions. They’re on the road more often than any other vehicle because they perform essential tasks. Personal vehicles, on the other hand, are stationary during certain times of the day, meaning they’re not emitting anything. This doesn’t mean automakers should stop developing electrified powertrains because that’s still a crucial portion of cutting emissions in the transportation sector. What this shows is certain parts of the automotive industry can benefit more from electrification and yield substantial benefits over the long term for both the environment and owners.