Can’t charge your EV with the Ford F-150 Hybrid or Lightning? Here’s why 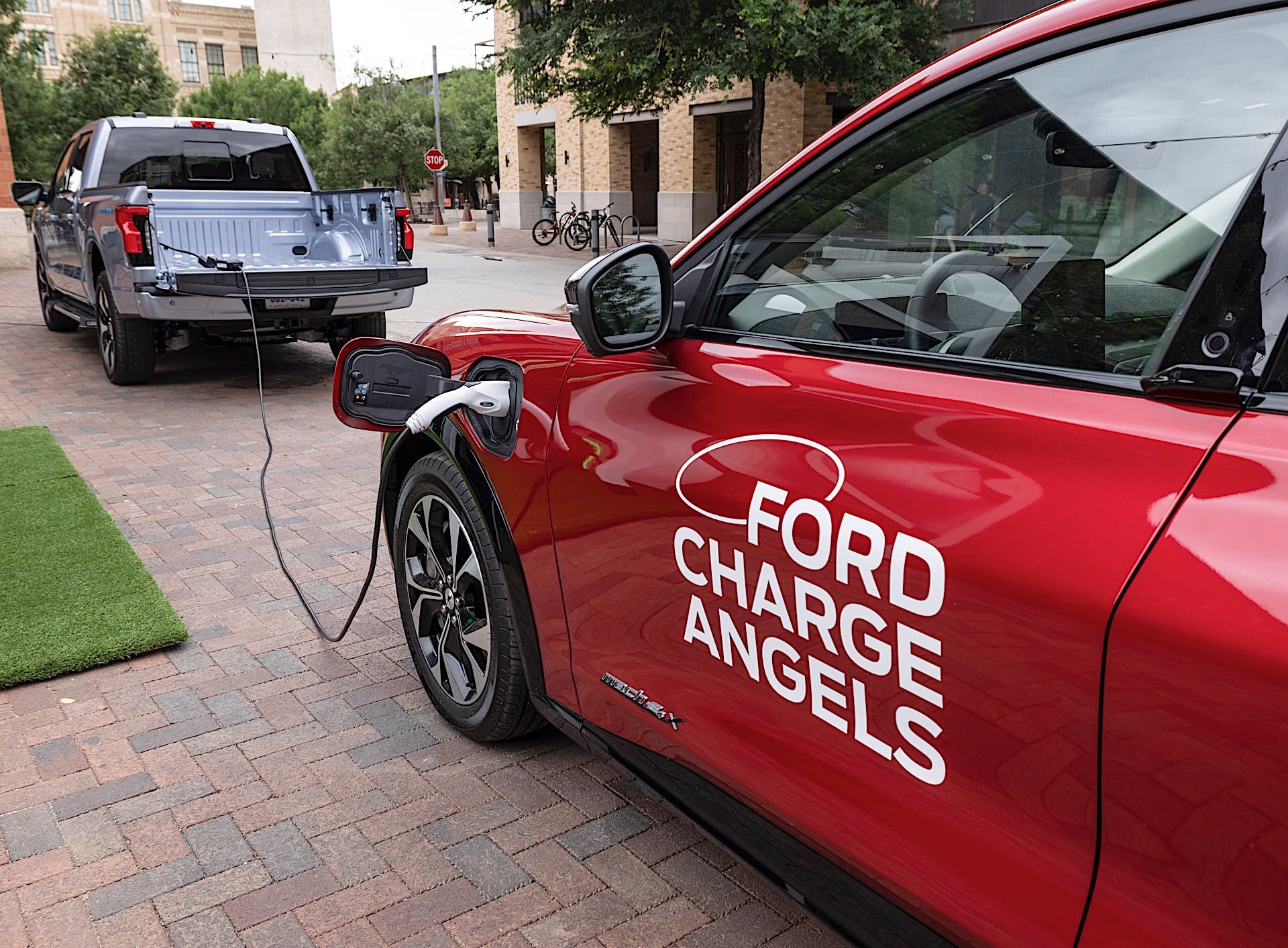 If you follow our coverage, you know that early on after Ford started shipping the F-150 Hybrid with Pro Power Onboard we attempted to charge up our long-term Tesla Model 3 using the generator and the Tesla mobile charging adapter. It worked flawlessly.

For reference, the F-150 Hybrid’s 7.2 kW onboard generator can output 3,600 watts from two circuits at 240 volts and 30 amps. What’s impressive is that is not a peak rate, but rather a continuous charge. We even calculated how much fuel it takes to run the generator at peak power, and it’s surprisingly efficient (and quieter, and likely better for the environment than a portable generator).

Recently, we attempted something similar for an upcoming video with a 2022 Ford Mustang Mach-E and a F-150 Hybrid with the 7.2 kW generator. Each time we plugged in the mobile charging cord that came with the Mach-E and started the process, the breaker would trip and the system would shut down. We were unable to charge the Mach-E at level 2 speeds with the mobile adapter’s NEMA 14-50 plug attached to an adapter into the NEMA L14-30 plug on the F-150.

So why did it work flawlessly for the Tesla, but not work at all with the Mach-E?

We reached out to Ford, and head of charging and energy services Matt Stover helped us figure it out.

On our Tesla, we could control how many amps the car asked for when charging. During our testing, we asked for 30 amps (and not up to 32 amps that the mobile charger supported), because the spec for the generator is 30 amps max.

With the Ford mobile charging cord included with the Mach-E, the Mach-E was asking for a full 32 amps. The Mach-E has no way to request less than 32 amps through software, and the mobile adapter asks for the full amount.

Obviously, if you ask for more amps than the system can supply, it won’t work.

So what can you do? On the F-150 Lightning, Ford touts the ability to charge another EV from the Lightning’s onboard generator.

As it turns out, Stover tells us, the mobile charging cord that comes with Lightning will peak at 30 amps and not 32. So if you plug the Lightning’s mobile adapter into the generator of either the Lighting or the F-150 hybrid, and then plug into an EV, the system will only ask for a maximum of 30 amps.

If you purchase a Lightning and plan on charging other EVs with it, as long as you use the mobile charging adapter that comes with the truck to charge the EV, you won’t have any issues. It should work with any EV that charges via a SAE J-1772 plug. This would also include Tesla.

If you’re charging an EV that you can control the amps on, such as Tesla models, then you can use any mobile charging cord to charge the car with, since the car will only ask for 30 amps.

If you buy a F-150 Hybrid and want to use it to regularly charge EVs there isn’t an elegant solution yet. Basically you’ll need to buy the mobile charging cord for the Lighting (which will soon be available from the Ford parts counter), and use that to charge whatever EV you want.

That solution should work with an EV. While Ford won’t talk about future products or product plans, we do hope that Ford will add via a software update to its EVs that will let the car set the peak amps for the charge rate, the way that Tesla allows its owners to do. Not only for the sake of this usage scenario, but also for owners who might be plugging into wiring that might not be able to reliably deliver 32 amps.

To sum it all up, if you have a Lightning and use the Lightning mobile charger you’ll be able to charge any EV without issue.

If you have a Lightning and you use the mobile charger that came with whatever EV you are charging, you might have an issue since the car and adapter might ask for more than 30 amps.

If you have a F-150 Hybrid and you use the Lightning mobile charger you won’t have any issues.

If you have a F-150 Hybrid and you use the mobile charger than came with the EV, you might have an issue if the car and charger ask for more than 30 amps.

If you have either truck and a Tesla, and you tell the car to only ask for a maximum of 30 amps from whatever mobile charging adapter you might be using, and you won’t have any issues.

It’s an interesting problem, for sure, but one we’re glad we were able to figure out.