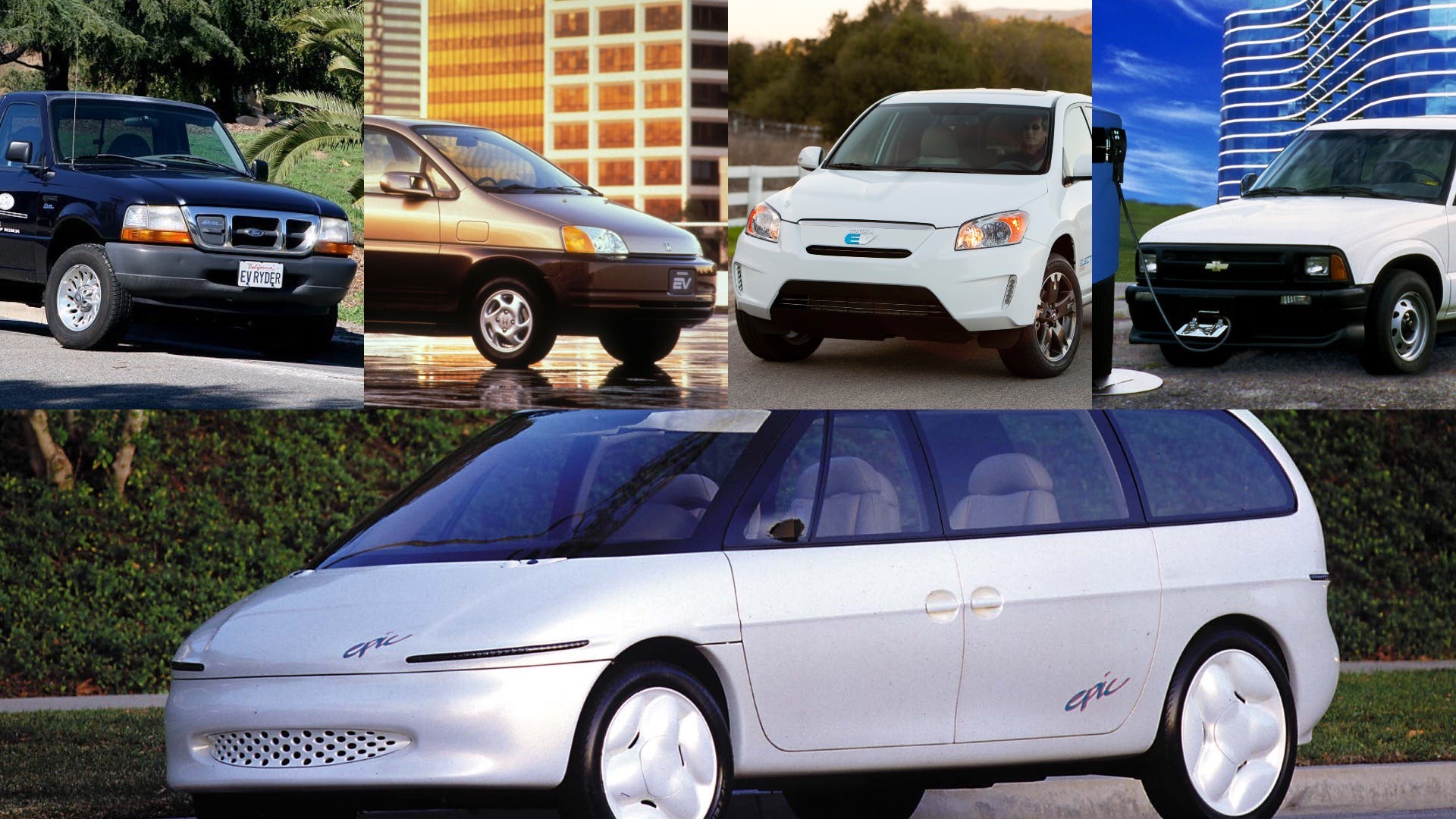 Even casual car fans know about the GM EV1, long described as a pioneer in the world of electric vehicles. That recognition may come from the well-received 2006 documentary Who Killed the Electric Car? But what about the other early EVs that popped up in the late 1990s?

Electric vehicles on sale today owe a lot to the early fans and developments from automakers around the industry. Even compliance vehicles from just eight years ago seem less revolutionary in comparison.

Here are five early electric vehicles that arrived well before EVs grew into the segment we recognize today.

For example, would we have the impressive RAV4 Prime if Toyota didn’t toy around with the idea of an electric model first? In the late 1990s, the automaker electrified the RAV4 to meet the California Zero-Emission Vehicles mandate at the time. The result was a Toyota crossover packed with 24 12-volt 95Ah nickel-metal hydride batteries with a total of 27 kWh of juice. They recharge via a user-friendly inductive charging paddle known as Magne Charge, rather than the plug we recognize as today’s standard. It took five hours to charge at a 6 kW rate, and the batteries were good for an EPA certified 95 miles. Unfortunately, due to a curb weight of about 3,395 lbs. and its electric motor putting out just 67 horsepower and 140 lb-ft of torque, it was pretty slow. Limited to about 80 MPH, it would take 18 seconds to hit highway speeds, which is about the same time it would take a modern EV to hit 60, and then slow back down to a stop.

Offered to fleets in 1997, Toyota opened up the books in 2001 when it allowed small businesses to purchase a model, even “companies” with just one employee. In 2002 Toyota opened things further to the general public. Approximately 1,484 RAV4 EVs were sold/leased over the years, and in typical enduring Toyota Fashion, some have even racked up over 100,000 miles during that time.

Some odd corporate shenanigans forced Toyota to stop making the RAV4. The NiMH EV-95 battery used a patent which GM bought through a subsidiary, known as GM Ovionics. Toyota’s battery supplier, Panasonic used this battery in the RAV4 EV. However, when GM Ovionics was bought out by Texaco, a patent infringement suit was filed against Toyota and Panasonic which eventually resulted in a winning settlement of $30,000,000. From there, the patent holder would only accept orders for over 10,000 units, which was way above the scale of EVs at the time. So there goes the RAV4 EV.

In 2012, Toyota gave the RAV4 EV a second go with some help from Tesla. Essentially a third-Gen RAV4 with Tesla running gear, the second RAV4 EV featured a 41.8 kWh Tesla battery, as well as a 115 kW electric motor, good for 154 horsepower and 220 lb-ft of torque. This led to an EPA-rated range of 103 miles which was hardly an improvement over the first-generation model. Fortunately, it was a much more responsive drive.

Toyota had some new ideas about the battery pack here: when plugging it in, you could choose to recharge to the full capacity of the battery, known as Extended mode, or just 35 kW, known as Standard mode. This feature lets the customer decide if they will go for more distance on a charge or try to preserve the life span of the battery. About 2,500 vehicles were sold between 2012 to 2014. The partnership between Tesla and Toyota also seemed to sour, as the two companies clashed over design decisions. Engineers from the two companies argued over parking brakes, regenerative braking, battery protection, and more.

Today we know Toyota as a Hybrid and Fuel-Cell oriented automaker. The two generations of RAV4 EVs are the only full electric models ever sold by the company in the US, and the automaker seems hesitant to jump in with both feet into the world of BEVs. It seems understandable, as they were backstabbed by a battery patent holder first, and went through the headaches associated with collaborating with Tesla.

While the RAV4 EV plotted a pained path to the RAV4 Prime, the Chrysler Pacifica has interesting and rare roots in an electric minivan. Dubbed the TEVan, Chrysler’s efforts in early electrification were a concept brought to life. Between 50 and 80 models were made, and each carried a price of about $120,000. Half of the TEVans used 30 6V 180Ah nickel-cadmium batteries, with helped to deliver at least 50 miles of range, while the remaining models used 30 6V 200Ah nickel-iron batteries which helped to deliver about 60 miles.

The batteries were arranged into six removable pods under the floor, and the TEVan featured an electric motor that peaked at 70 horsepower. That sounds like a lot to ask from an electric motor designed to motivate a 5,000 lbs. van.

A few years later, Dodge featured a sequel to the TEVan, called the EPIC. The EPIC was first revealed as a concept at the Detroit Auto Show way back in 1992, but the production model was closer to the TEVan than the show car.

EPIC stands for Electric Powered Interurban Commuter, but it was essentially a 1999 Dodge Caravan SE with an electric powertrain. These vans used nickel-metal hydride batteries, with a maximum capacity of about 31.899 kWh. The range was bumped to about 90 miles, while the motor now featured an output of 100 hp. These vans weren’t meant for public use and were sold to government and utility fleets. About 200 of them were in use at one time.

However rare these vehicles were, it was clear that Dodge/Chrysler was onto something. Back in the day, there was an event known as American Tour-de-Sol, which was a road rally for vehicles promoting sustainable energy. The Dodge Epic participated in this rally a few times and earned the “Customer Acceptability” prizes, suggesting that the public liked what they saw. Next came the hybrid Town & Country, as well as the new plug-in hybrid Chrysler Pacifica.

Today, Honda has several electrified vehicles, including the adorably cute and cool Honda E. But this strategy started with a small three-door hatchback called the EV Plus. Originally designed to help Honda meet the California Zero-Emission Vehicles requirements, the EV Plus featured some innovative ideas that still have an impact today.

For example, it was among the first EVs to shy away from lead-acid batteries, instead sporting a battery pack made up of 24 nickel-metal-hydride units, with a total capacity of 28.7 kWh. It also used pancake-style electric motors (similar to the Mustang Mach-E 1400 Racer) rated at an output of 66 hp and 203 lb-ft of torque. The range was EPA-rated for about 81 miles.

With just over 300 units produced and leased from 1997 to 1999, the EV Plus was returned to the automaker, but not all of them were destroyed. The next technology for Honda to experiment with involved hydrogen fuel cells and the EV Plus provided the platform for the eventual Honda FCX. Honda says its learning experience and research with the EV proved beneficial in the creation and development of the FXC in 2002.

While the acceptance of EV pickup trucks seems slow these days, the truth is that Ford and Chevy gave the idea a run back in 1997. The Chevy S-10 EV borrowed a bit of tech from the GM EV1. For example, the motor in the S-10 was based on the EV1’s but downgraded to 85-kilowatts (instead of 100-kW in the car) due to the extra weight of the vehicle. Due to the similarities between the S-10 EV and the EV1, the pickup featured front-wheel drive, an oddity for a truck. The batteries were also similar: in 1997, the S-10 and GM1 used lead-acid batteries with capacities of around 16 kWh. A short while later, the S-10 received NiMH batteries, roughly rated for 29 kWh and while a 26-kWh NiMH battery pack went into the EV1. Both vehicles also used those inductive charging paddles. The S-10 was originally expected to return 43 miles, while the upgraded NiMH battery returned 95 miles. That late model could even carry a payload of 950 lbs.!

READ: Everything you need to know about the electric Ford pickup truck

You can see GM’s gears turning in 2004, as the automaker converted an old S-10 EV to a rear-wheel-drive by using in-wheel motors, realizing the potential and advancement of EV technology. While GM has been working on many EVs since the S-10 EV and EV1, there have been few trucks. Next for the General is the Hummer EV, which has a pickup-truck-like body, but features four-wheel-drive through three electric motors. Two electric motors power the rear wheels and can even act as a locked differential.

The Ford Ranger EV didn’t have another vehicle to share its components with, so everything started from scratch. There are worse starting points; at the time, the Ranger was the bestselling compact pickup in North America. Unlike the S-10, the Ranger was rear-wheel-drive and featured a 90 horsepower electric motor, which was powered by a battery box bolted to the underside of the vehicle. Early models used 39 8V lead-acid batteries and had a range of about 65 miles, while a NiMH battery pack came later, with 82 miles of range. It still managed to feature a payload of 700 lbs. Approximately 1,500 Ranger EVs were produced and like other vehicles on this list, the majority of them were leased out to fleets. While some of these leased vehicles were sold to lessees, there was a vocal community of EV fans who didn’t want to see Ford crush the remaining vehicles. The backlash prompted Ford to change their minds. It’s said that some customers were even able to purchase the Ranger EV for a dollar. It’s said that about 200 Ranger EVs are still out there, part of a small community known as Ranger EV Owners Link Together, or REVolt.