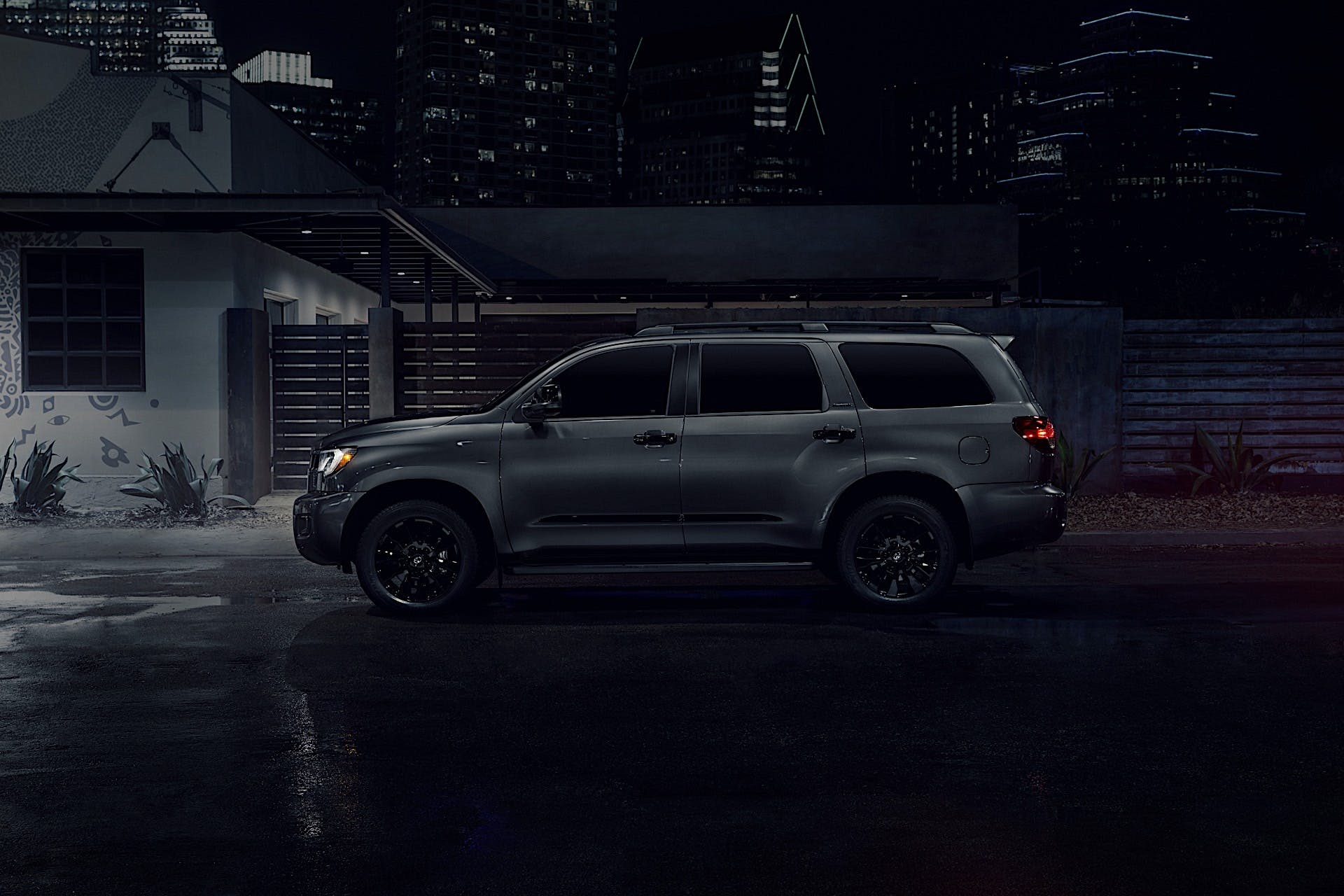 The current Toyota Sequoia is an automotive dinosaur at this point. In production since the 2008 model year, this full-size SUV has undergone multiple refreshes. The latest one added a modern infotainment system and active driver assistance features. However, the moment you drive it, you immediately notice how dated the Sequoia is. A new generation is just around the corner, though. Like the current model, it’ll be body-on-frame, sharing many parts with the upcoming Tundra. Along with the new model comes electrification as Toyota promises to offer an electrified powertrain across its entire lineup up by 2025. Will that help this massive beast stand out against the competition? Here’s what we know so far about the 2023 Toyota Sequoia.

There’s no denying that the 2023 Sequoia will be a massive SUV. Expect it to grow slightly versus the current model and take cues from the Tundra. That means it’s going to look quite imposing complete with a massive grille and T-shaped LED daytime running lights. The boxy shape will remain but the latest Toyota design cues should make their way into the Sequoia. This could lead to a more angular look than the current model, which has softer curves and corners.

Inside, Toyota’s largest SUV will finally get a much-needed revamp. As before, expect at least four to six trims with varying themes. This should include a luxuriously equipped Platinum model swathed in leather and packed with all the latest tech features. That means an 8.0-inch touch screen on lower trims and an available 12.3-inch display on upper ones. The 2023 Sequoia will likely retain analog gauges with a 7.0-inch instrument cluster display in the middle instead of going to a fully digital setup. Second-row captain’s chairs should remain as an option on lesser versions and standard on the range-topping Platinum. Whether the Sequoia gets the ottomans found in the Sienna remains to be seen.

ALSO CHECK OUT: What we know about the 2023 Toyota Tacoma and its electrification

On the driver assistance front, the Sequoia will get a full suite as standard in keeping with Toyota’s commitment to safety. Toyota Safety Sense 2.5+ is the latest version, which builds on previous versions by adding automatic emergency braking capability in intersections and emergency steering assistance. A newer version with even more capabilities could eventually debut in the 2023 Sequoia, giving it some degree of semi-autonomous driving.

The biggest updates for the 2023 Sequoia will be under the skin. Alongside the Tundra, the Sequoia will move to the upcoming TNGA-F architecture, a new body-on-frame platform specifically for trucks and SUVs. Since they’re the largest vehicles in Toyota’s lineup, the Sequoia and Tundra will use a long-wheelbase version of TNGA-F. To distinguish the Sequoia from its truck sibling, expect a fully independent suspension to give the SUV superior ride comfort. TRD models should return for those looking for a more capable full-size SUV. The adaptive variable suspension could also be added to more expensive flavors of the Sequoia to further improve overall ride quality.

Powering the 2023 Sequoia will likely be the same twin-turbocharged hybrid V6 that’s also going into the Tundra. Since the TNGA-F platform is reportedly unable to accommodate anything bigger than six-cylinder, a hybrid is the only way to get more power. Unlike FWD-based Toyota hybrids, the Sequoia will likely feature a pancake setup where the electric motor is sandwiched between the engine and transmission. Expect Toyota’s 10-speed automatic to handle shifting duties and a larger than usual battery to back up the electric motor. In the Lexus LS, the 3.4-liter twin-turbo V6 makes 416 hp and 442 lb-ft of torque on its own using premium fuel. Toyota could retune the engine for regular octane, which could result in it making less power by itself. Together with the electric motor, it could have similar output as the LS but with way more torque on tap. Towing capability could take a hit because the hybrid system may add more weight to the new SUV but it’ll likely be minimal.

The 2023 Toyota Sequoia will be a completely different animal from the current model. As electrified powertrains become the norm, the Sequoia will no longer be that big V8-powered Toyota you got because it was roomy, smooth, and will last you a long time. When the new one arrives, it’ll still retain the same virtues you expect out of a Toyota vehicle only this time you’ll get gobs more torque on tap and superior efficiency along with all the reasons you get a full-size SUV. Electrification may just give the Sequoia a way to distinguish itself even more as SUVs continue to take over the market.