2022 Volvo C40 Recharge exudes a different aura in the metal 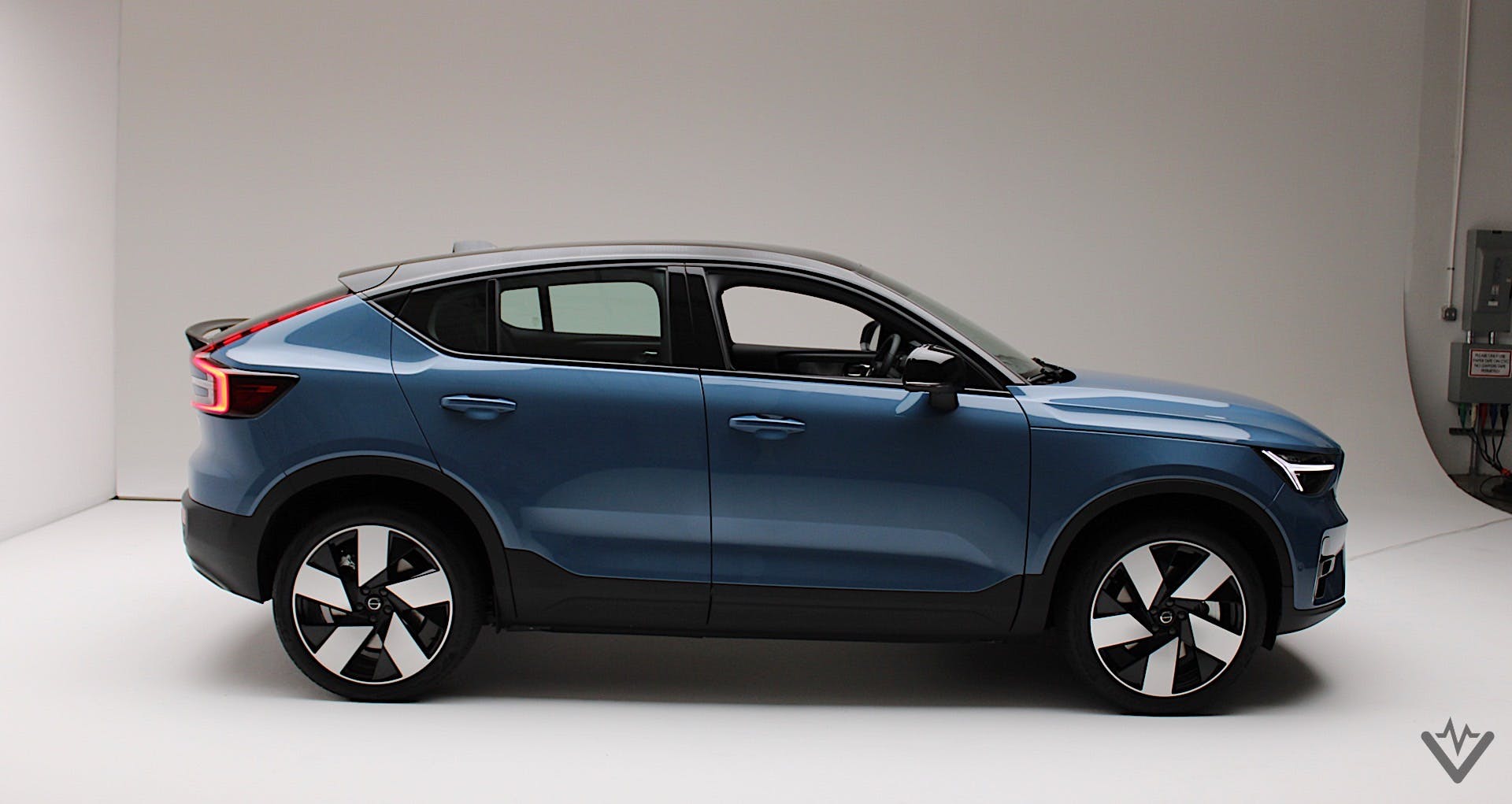 One look at the 2022 Volvo C40 Recharge and you may be thinking that it’s just a coupe-ified XC40 Recharge. While that’s partially true, the low-slung crossover exudes a different presence once you see it in the metal. We recently got a chance to spend time with Volvo’s first dedicated battery-electric vehicle in Los Angeles and found that it has all the Scandinavian DNA you expect out of a vehicle wearing the iron mark with a new twist.

The biggest difference between the 2022 Volvo C40 Recharge and its XC40 sibling is that roofline. A 5’11” person like myself is taller than the C40; in fact, the highest part of the car is on the same level as my neck. Volvo also had the XC40 Recharge on the other side of the room and clearly, that boxy crossover is taller and more upright. Volvo also succeeded in avoiding a derivative look because the C40’s rear end has a more conventional liftgate. This means it doesn’t give you raised sedan vibes. Yes, the roof slopes down dramatically but the functional rear spoiler complements the fastback profile.

You also find several key differences that give the C40 a character of its own. The enclosed grille, for instance, is no longer surrounded by a trim piece. Instead, it’s molded to be as flushed as possible with the rest of the front fascia. The LED headlight clusters are curved at the bottom and have a different light layout while retaining the Thor’s Hammer daytime running lights. You find triangular inserts on the lower part. In the back, Volvo’s signature full-length LED taillights remain but it’s no longer a single continuous strip because the top part now consists of broken lines.   The rear window is a single piece of glass that merges with the roof as if they’re a single piece.

Moving inside, Volvo says that they tried to bring the outside of the car into the cabin. As a result, you get cool Fjord Blue carpets just like the C40’s hero color to go with the black upholstery and a unique layered interior trim finished in gray, black, and white. You won’t be able to get the C40 with leather because it’s only offered with vegan materials. The rest of the cabin looks similar to the XC40; you find a portrait-style 9.0-inch touch screen on the dash housing Google’s Android Automotive OS and a 12.3-inch digital gauge cluster. All of the neat features you find in the XC40 are also in the C40 including the grocery bag hook, trash bin, massive door pockets, and a sizable storage cubby under the main display.

The driver and front passenger won’t be short on space inside the C40. Average sized adults will even be fine in the back; however, those who are taller and larger, will be short on headroom because of the low roof. Cargo space takes a hit too because of the low-slung roofline. At least the 60/40 split-folding rear seats, ski pass through, and small underfloor storage area remain.

When taken as a whole, the C40 feels more youthful. Somehow it still retains that restrained yet tasteful aura that every other Volvo exudes. Only this time, you get a bit more flair thanks to the dramatic roofline and design tweaks, creating a cohesive identity that’s all its own. Every C40 will also get a contrasting exterior meaning every color will get a black roof unless you get a black car that is.

Powering the C40 Recharge is the same dual-motor layout and 78-kWh battery as the XC40 Recharge and the Polestar 2. The combined output is 402 hp and 287 lb-ft of torque. On a single charge, the C40 Recharge is good for roughly 208 miles. It can charge at peak rates of 150 kW, allowing it to go from 0 to 80 percent in around 40 minutes. A level 2 AC charger will get you a full charge in around 9 hours thanks to the 11-kW onboard charger.

The 2022 Volvo C40 Recharge is available now for reservation but you won’t take delivery until the first quarter of 2022. Unlike most vehicles, the C40 is sold only online. The dealer is still involved in the delivery process but you won’t be able to go to a dealer lot and buy one on the spot after your test drive. Expect more EVs to join Volvo’s lineup as it intends to offer only battery-electric models by 2030. The next-generation models will be the first to go on an EV platform.