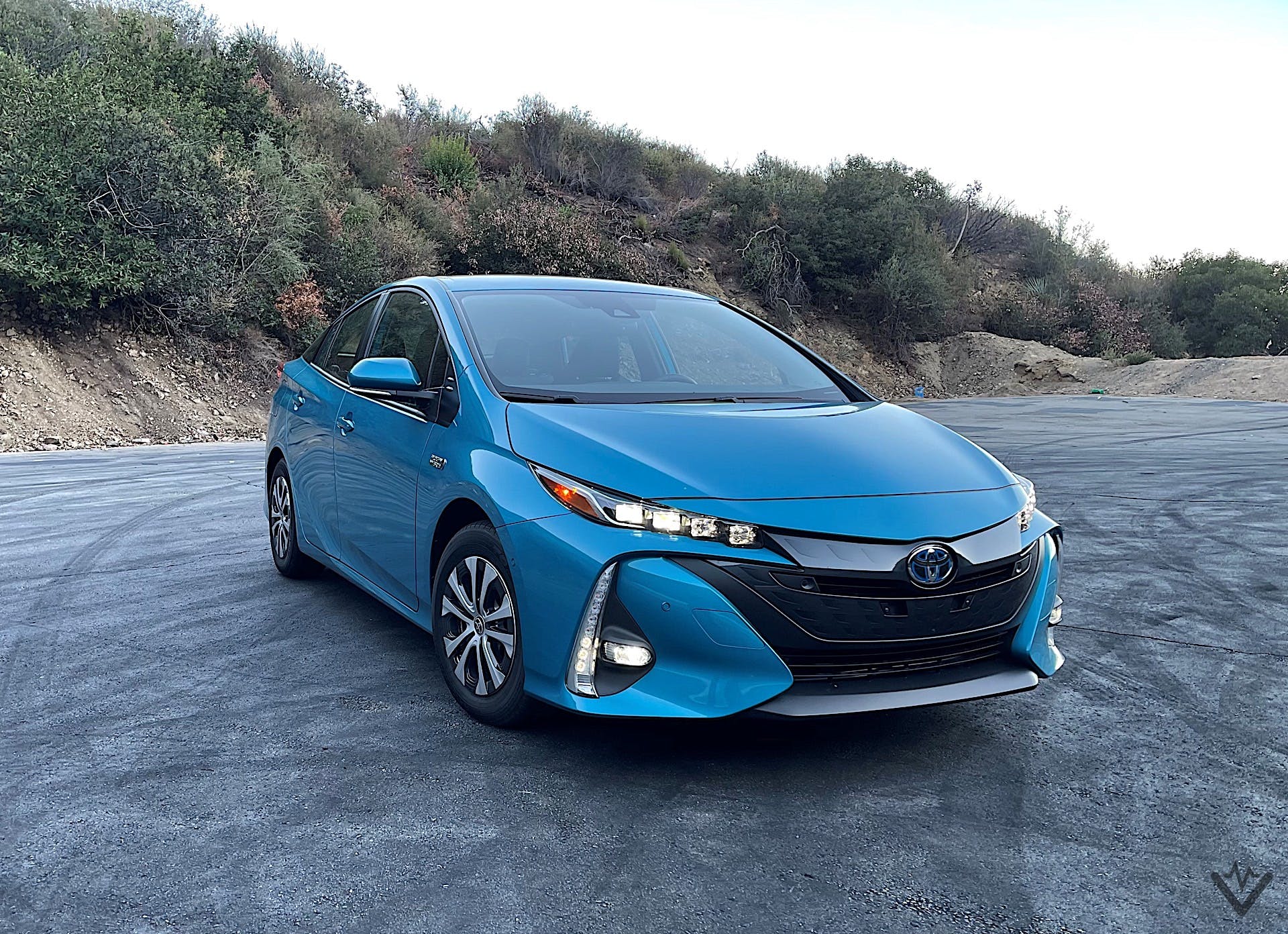 Judging the Toyota Prius for being an appliance is common. Average consumers and enthusiasts alike think this spaceship-looking hatchback is nothing but a vehicle to get you from A to B. For the record, the Prius is a pioneer. As one of the first gas-electric hybrids, it helped jump-start the move toward electrification. Now, there are two versions; the standard and the plug-in Prius Prime. The latter gets you a larger battery and an EPA-rated all-electric mode range of up to 25 miles on a charge. Will that and a prettier face be enough for you to choose it though?

Since arriving as a 2017 model, the Toyota Prius Prime has always been the better-looking Prius. The thin LED headlights and a nearly grille-free, front fascia creates a more pleasing appearance versus the standard Prius’ angular mug. Other distinguishing features include a carbon fiber-reinforced liftgate and curvy rear taillights.

Getting inside the Toyota Prius Prime, you’ll immediately notice the generous amounts of space. Four people sit comfortably; even tall passengers fit in the rear without any issue. The larger battery eats into cargo space, though, due to the higher cargo floor versus the standard Prius. You can still fold the rear seat backs 60/40 if you need more room but keep in mind it’s not a flat surface. More sound deadening would help, too, because the Prius Prime suffers from excessive wind buffeting at highway speeds, especially over the A-pillar.

Toyota’s infotainment systems require additional simplification. The version found in the Prius Prime has a straightforward layout but the lack of physical buttons and most controls being lumped inside the massive 11.6-inch touch screen makes it distracting to use. Quicker responses to your inputs and faster loading times would go a long way in improving the user experience. Although the 10-speaker JBL audio system is crisp and clear, it doesn’t distribute sound evenly throughout the cabin, focusing mainly on the front half.

Powering the Toyota Prius Prime is the same hybrid system found in the non-plug-in model. That pairs a 1.8-liter I4 to two electric motors, an 8.8-kWh lithium-ion battery, and a planetary gear set. Total system output is 121 hp. Should you take advantage of the Prius Prime’s ability to drive in EV mode, it’ll take slightly over four hours to charge the battery to 100 percent using a standard wall outlet or a little over two hours via a 240-volt level 2 charger. The larger battery also makes the Prius Prime heavier than the standard Prius by 155 to 355 pounds depending on the trim, but you wouldn’t know it when you’re driving around. There’s good power for passing, merging, and climbing hills, thanks to the electric motor immediately assisting the gas engine when you put your foot down. From a standstill is where things aren’t as immediate; floor the throttle at a stop sign and the car will leisurely get up to 30 mph before finally getting its full stride.

Quite possibly the highlight of the Toyota Prius Prime’s driving experience is just how normal everything feels. The suspension absorbs imperfections adeptly, meaning passengers don’t feel much harshness on poorly maintained roads. There’s good body control, too; the car doesn’t flop around during evasive maneuvers or when driving through windy roads. Secondary motions are also kept to a minimum, stopping the car from wallowing over speed bumps and dips.

Toyota has banished the grabby brake operation from previous iterations of its hybrid system. You get linear stopping power thanks to smooth transitions between regenerative and mechanical braking and you won’t get jolted if you suddenly stomp on the brakes. However, the steering, while accurate, could be quicker; there’s a very slight delay between the time you turn left or right and front wheels doing something.

You have multiple modes to choose from, Normal, Eco, Power, EV, EV Auto, and a B mode for maximum regenerative braking, all of which can help you maximize the car’s efficiency. Together with helpful gauges on the dash, which allows you to keep track of what the hybrid system is doing, the Prius Prime teaches you how to hyper-mile without driving like a slowpoke.

The version of the Toyota Safety Sense 2.0 suite on the Prius Prime is an improvement over the outgoing Toyota Safety Sense-P and doesn’t bring too much attention to itself. Lane-keeping now has a centering function that can handle gentle turns and keep you from drifting around excessively. Adaptive cruise control, on the other hand, remains too conservative; the system leaves too much space between you and the vehicle ahead in the closest distance setting, allowing others to cut you off.

Our test vehicle is the 2021 Prius Prime Limited, a range-topping model that costs $34,995 including the $995 destination fee. Like all plug-in hybrids, the Prius Prime is eligible for a tax credit; in this case, it’s $4,502. There are also state incentives available depending on where you live.

Outside minor quibbles, the 2021 Toyota Prius Prime is one of the best daily commuters available. It’s easy to live with thanks to a roomy cabin and a comfortable ride. The ability to plug-in and choose when to travel in EV mode gives you more flexibility and keeps you away from fuel stations longer. Sure, the Prius Prime’s looks aren’t for everyone but if you can get past that, the benefits more than make up for it.