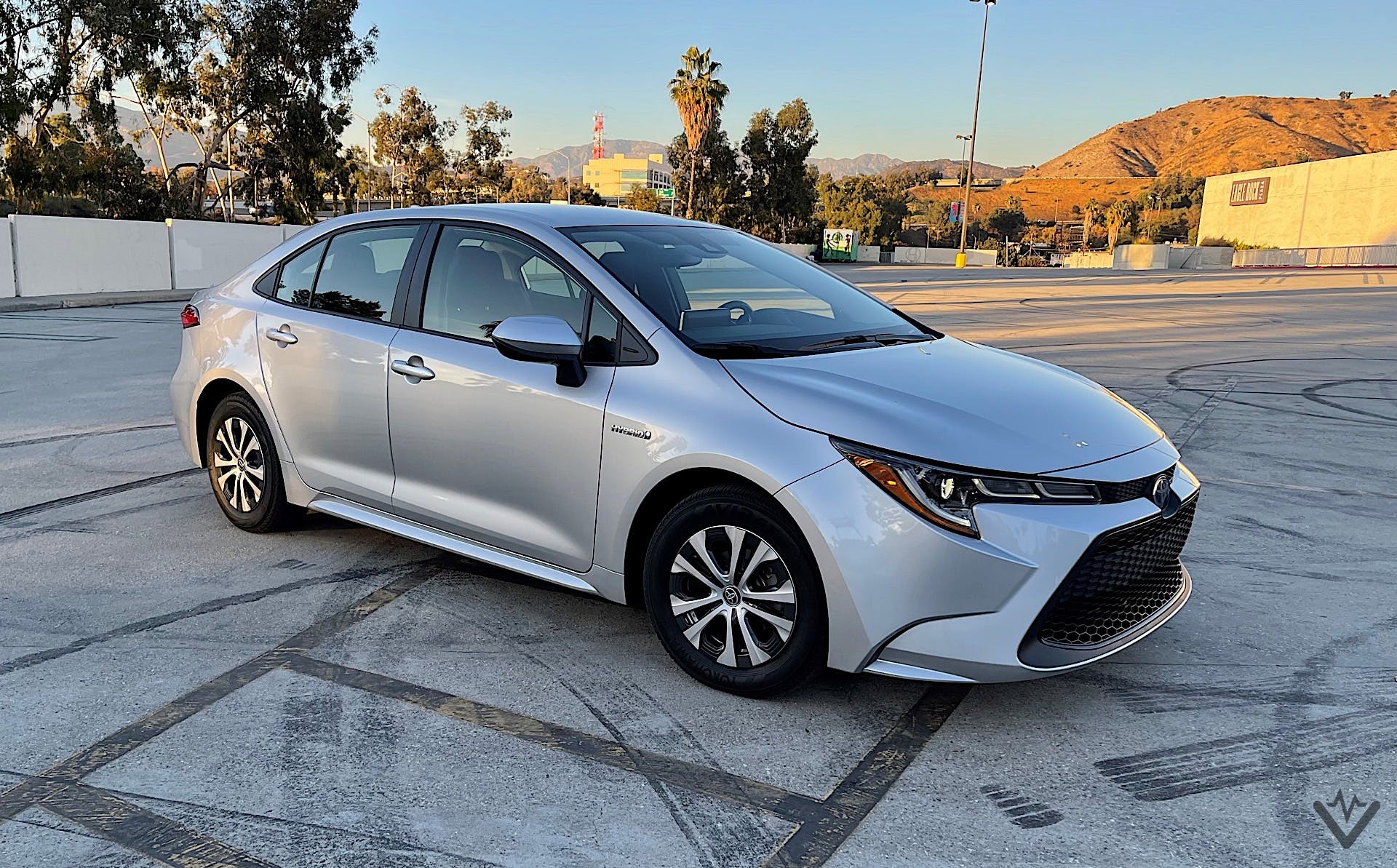 Toyota’s latest Corolla is a massive leap forward over its predecessors. This popular compact car has evolved from a basic appliance to a vehicle with character. Now, there’s a super efficient hybrid model that promises exceptional efficiency and a long standard equipment list for not much money. Could this be the ultimate commuter for those in search of the best all-around compact sedan? Let’s find out.

You’ll need to look hard in order to tell the difference between the standard model and the Toyota Corolla Hybrid. Blue Toyota logos, hybrid trunk and fender badges, and 15-inch alloy wheels are the only cues giving away that this Corolla is electrified. Otherwise, the car looks like every other Corolla sedan out there, sporting the same gaping mug, short rear deck lid, and cab forward greenhouse.

Get inside and you’ll immediately notice that this Corolla isn’t a spruced up, high-trim model. There’s hard plastic on the upper door cards while the dash has slightly softer ones with a little more padding. Even the steering wheel isn’t leather-wrapped, which can feel chintzy in your hands. You can tell that there’s less sound deadening, too, due to the noticeable amount of wind buffeting at highway speeds. On poorly maintained roads, there’s a bit of tire roar and road noise, the former of which is likely due to the eco-mind tires’ hard compound.

Most of the interior layout remains the same as the standard Corolla, featuring an 8.0-inchtouch screenn as the dash’s centerpiece. What sets the Corolla Hybrid apart from other lower-trim LE and SE sedans is the addition of a 7.0-inch gauge cluster display, which is exclusive to the XLE and XSE on the non-hybrid models. The native infotainment controls are intuitive but their response times are slow so it’s best to use Apple CarPlay and Android Auto for all your multimedia needs.

Interior packaging could be better in the Corolla Hybrid. There’s not enough small item storage; you only get one mobile device tray and two cup holders. Even the glovebox and center console storage are small. At least passenger space is good; four people fit comfortably and there’s a 13.1- cubic-foot trunk with 60/40 split-folding rear seatbacks for extra flexibility. Credit the lithium-ion battery being placed under the second row for keeping cargo space the same as the standard Corolla.

One of the Corolla Hybrid’s highlights is just how pleasant it is to drive. The Prius-shared hybrid system uses a 1.8-liter I4 coupled to a lithium-ion battery, two electric motors and a planetary gear set. With 121 hp combined, you’d think that power would be lacking; surprisingly, it’s not. At 2,850 pounds, the Corolla Hybrid is light by hybrid standards and that becomes apparent when you put your foot down. Passing, merging, and getting up hills aren’t an issue thanks to the electric motor’s instant torque. The only time where the Corolla Hybrid feels sluggish is off the line acceleration, but then again, that’s not what this car is for.

Since moving to the TNGA-C architecture, the Toyota Corolla has gained some newfound confidence. You’ll immediately notice the Corolla Hybrid’s composure, staying planted even when going over bumps while turning. Quick, responsive steering makes quick emergency maneuvers a breeze. There’s noticeable amounts of body roll but it’s well controlled. Passengers don’t feel much harshness because the suspension absorbs road imperfections and impacts so well despite being slightly stiff. Credit the 15-inch alloy wheels for keeping things cushy; however, they’re also the reason why the Corolla Hybrid lacks grip because the tires wrapped around them are focused on improving efficiency not road holding.

Considering how affordable the Corolla Hybrid is, its standard suite of driver assistance technologies work quite well. Toyota Safety Sense 2.0 adds a lane centering component, which does a fabulous job at making sure you’re not drifting all over the place. It can even make gentle turns on clearly marked roads. Adaptive cruise control operates smoothly, too, accelerating and braking in a manner that won’t jerk you around even when someone cuts you off. The system’s distancing remains conservative; there’s roughly 2.5 car lengths between you and the vehicle ahead with adaptive cruise control in the closest setting.

Based on the LE grade, the Corolla Hybrid costs $24,495. Our test vehicle came with blind-spot monitoring and rear cross-traffic alert, which adds $500, and a couple dealer-installed accessories for a grand total of $25,994 including the $995 destination.

(Editor’s note: The blind spot monitoring was not an option on the 2020 hybrid, which was one of the only demerits from our review of the 2020 Toyota Corolla Hybrid.)

For something so inexpensive, you’d think that you’re getting penalized for getting the Toyota Corolla Hybrid. Once you drive it, you realize that this is the strongest model in the lineup. This electrified compact sedan is tough to beat if you’re looking for the ultimate low-cost commuter vehicle. You get room for four, efficiency, and the latest safety and multimedia technologies all wrapped in a value-laden package that’s pleasant to drive every day. Not many compact sedans give you so much for so little money, especially when you consider the Corolla Hybrid’s ability to sip fuel. After a week, we averaged 65 mpg. How’s that for efficient motoring?