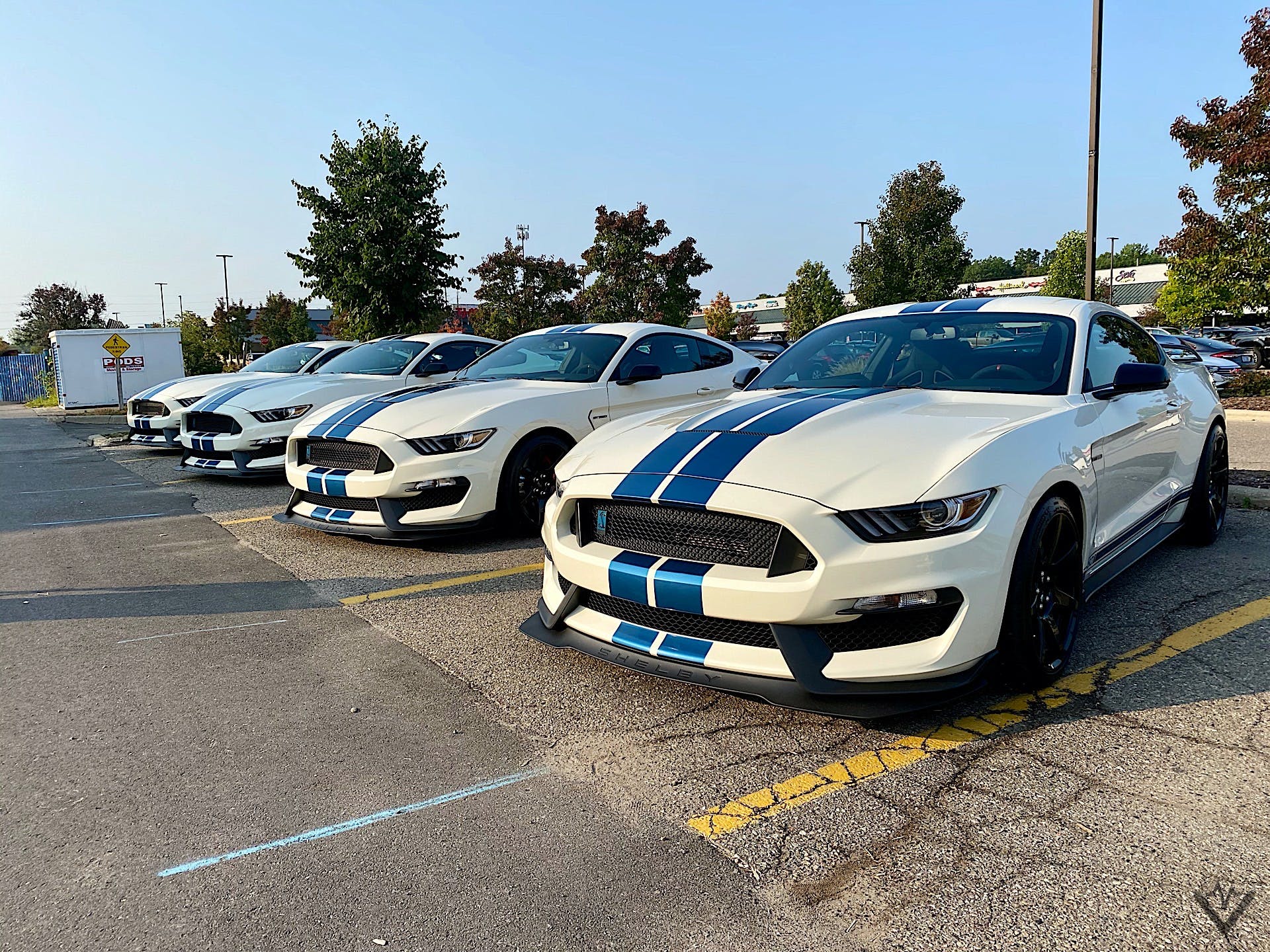 Last year at an event in California, Ford pulled the sheet off the all-new, fully electric crossover from the Blue Oval. It was called the Mach-E. But more specifically, it was called the Mustang Mach-E.

“You’re telling me that the Ford Mustang is now a crossover and an EV?” The people cried foul. Some folks even thought a petition would get Ford to change their mind on the naming. It, obviously, didn’t.

I completely understand why Ford went with the Mustang name. First off, they want to articulate that the Mach-E will have performance chops to back up the electric powertrain. Secondly, there’s no rules that say the Mustang has to be a two-door coupe — Ford makes the rules about their own cars. Lastly — and this is key — we wouldn’t be talking about the Mach-E at all if it didn’t carry the Mustang badge.

Whether people are outraged or satisfied, they are talking about an upcoming EV from an American manufacturer. it is extremely difficult to get the mainstream public talking about any EV at this point that doesn’t have a Tesla badge on it. In many ways, Ford has already succeeded in the Mach-E launch because people are still talking about the product and it is not on sale.

During an event prior to the reveal, I sat at a table — remember sitting with people at tables? — with Dave Pericak. He sits at the top of the Ford Icon lineup and knows a thing or three about making performance cars and driving fast. And jumping Raptors, but that’s a story for another time.

I sat across from Dave and straight up asked him, “Are you bullshittin’ me? Is this a Mustang?” We’ve interacted before so I assume he appreciates my candor. He simply replies, “Yes.”

Until I can drive the new Mach-E, I can’t say for sure if he’s right. But one thing I can do, in anticipation the upcoming Mach-E launch, is to spend time in the top-spec Mustangs you can currently buy. They are the 2020 Shelby GT500 with 760 horsepower and the 2020 Shelby GT350 Heritage Edition.

Both cars are Shelby models, but both cars approach being sports cars differently. Both are an absolute hoot to drive, but for different reasons. Both are also the legacy of high performance Mustangs and if the Mach-E can’t channel some of this energy, it is not going to work.

The 2020 Ford Mustang Shelby GT500 with the Carbon Fiber Track Pack has a manufacturer’s suggested retail price nearly double the most expensive Mach-E.

Yes, it has a 760-horsepower engine mated to an amazing 7-speed dual clutch transmission. The $18,500 Carbon Fiber Track Pack comes with loads of aero bits to keep the car planted to the tarmac, and make it a costly repair if you scrape the front chin spoiler. You also get splitter wickers, are just fun to say, but they aren’t street legal so in photos they’re in the trunk.

Unlike the Mach-E, which seats 5 comfortably, the GT500 with the Carbon Fiber Track Pack can only seat 2. The rear seats are deleted as part of the high-performance package.

It looks like a race car — or probably more accurately — a racing touring car. it is also the fastest and best performing Mustang I’ve ever driven. Full stop.

It also sounds amazing, though Ford asked their friends at Eaton to not make sure the supercharger whine that noticeable. You’d almost forget it was supercharged if you didn’t know. On the launch program in Las Vegas last year, the only time I could hear the whine is when I was standing alongside the track as the cars came hurtling toward me at full throttle and at a speed of 125 mph.

Sound is something I’m going to keep coming back to. Modern-day sports cars are technological marvels. They are also capable of performance that exceeds the best supercars from not that long ago. They make driving at speed almost easy. They’re pussycats and are easy to tame.

So to make them a bit more exciting, engineers focus on the sound. Dodge Hellcat products are known for their supercharger whine. Jaguars make pops and crackles from the exhaust that sounds like lightning just struck nearby. Lamborghini’s V12 will make the hair on the back of your neck stand up from a mile away — and shoot flames from the exhaust.

The sound the car makes adds to the sense of theater of the vehicle. If the car looks bonkers — like the GT500 — and sounds bonkers, it’ll put a smile on your face before you even leave the driveway.

Yes, the Shelby GT500 is blistering on a racetrack. But you feel like a badass driving it, whether or not you’re at the local drag strip or cruising down Woodward Avenue in Detroit at 15 mph.

If the GT500 is a brute in a suit, capable of whooping your ass but also being civilized, the GT350 is Matthew McConaughey. it is full of charm and personality.

What sets the GT350 apart is the manual transmission and the flat-plane crank V8 that screams to an 8,250 rpm redline. Yes, it makes good V8 noises like the GT500, but it has a completely different sound profile once you pass 6,000 on the tachometer.

it is not quite a Ferrari wail, but it is far most sophisticated than the Mustang exterior would have you believe.

You feel like you’re part of the car in the GT350. The steering is direct, though lacks some feel. The wide tires tramline a bit on the less-than-perfect Michigan back roads. The gearshifts are properly notchy, and the clutch is not light but is manageable.

While you can take the GT350 on the track, and you should with the R version, the car feels more at home bombing down your favorite back road. it is more of a sports car than the GT500 because you are part of the experience. You are part of the process. If the meatbag behind the wheel didn’t exist, the car wouldn’t go anywhere.

Back at the lunch stop, I start to get a bit wistful. You see, on this first drive of the Heritage Edition GT350, Ford tells me that this is the last year for the current generation GT350. That beautiful engine will soon be no more, and that this might be the last time I drive this fun sports car. I wish I had more seat time.

In Wimbledon White with blue striping and historic GT350 badging, you’d be forgiven if you thought this car came straight out of a time portal. It reminds me of the 50 plus years of heritage surrounding the Mustang name plate. It reminds me of Ford’s relationship with Caroll Shelby, and what he did for Ford performance.

It reminds me of what the Mustang is; an experience. it is more than Cars and Coffee crashes or teenagers spending their paychecks at AutoZone on questionable add-ons. Over the course of its life it has evolved and morphed into a modern day marvel that still remembers where it came from.

That gives me hope. it is a lot to live up to, the legacy of the Mustang. But through nearly every iteration of the car, it was made better. With every iteration, it stayed relatively true to the mission while adapting for the changing needs of the buyer and the market.

If Ford can adapt the Mustang over the years while still staying true to the heritage, they might just be able to pull it off with Mach-E. Yes, the Mach-E is the biggest change to Mustang since the Mustang introduction, but it is possible that the Mustang enthusiasts working on Mach-E know and respect what that horse badge means.

Could it all blow up in their faces? Is it possible that an electric car simply can’t be fun or exciting like a gas-powered equivalent? Sure. Absolutely. But I’m not willing to concede that. At least not yet.

(Disclosure: Ford provided both Mustangs, insurance, gasoline and food on the GT350 drive day for the purpose of this writeup. Opinions are our own.)