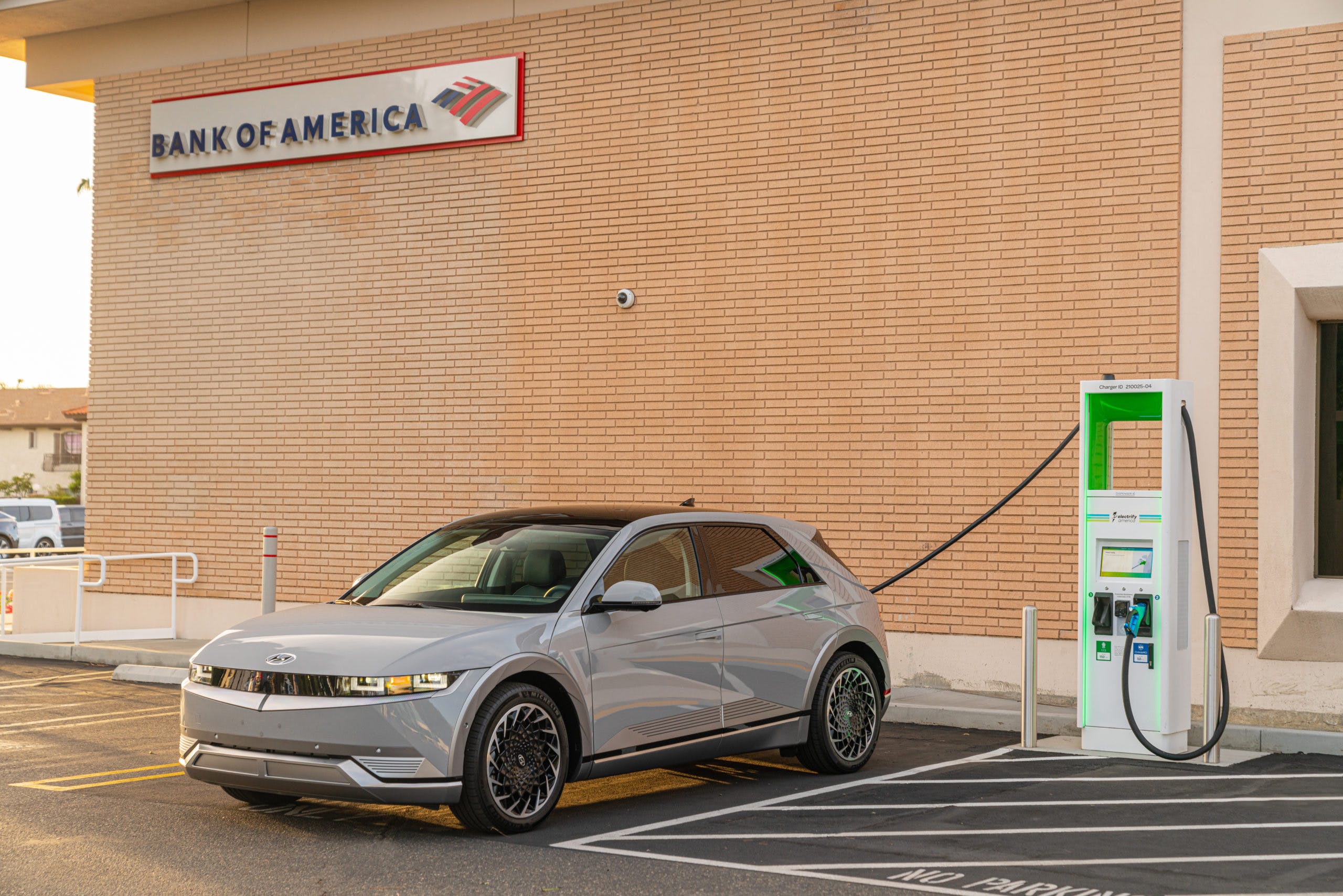 Charging your battery-electric vehicle usually means going to areas where you can shop, eat, or simply relax. Well, now you can manage your finances while juicing your car up because Electrify America and Bank of America announced plans to double the number of charging stations located in the former’s branches by the end of 2023. Currently, there are 172 individuals Electrify America chargers at 46 financial centers and this partnership aims to grow that to 350 and 90 respectively.

“Electrify America is expediting the electric future by providing ultra-fast charging to customers in convenient locations,” said Anthony Lambkin, Senior Director of Operations at Electrify America. “Collaborating with companies such as Bank of America – who share our goals for a more sustainable future – helps to accelerate the transition to electric transportation and meet customers’ needs.”

Bank of America and Electrify America started their collaboration in 2019. In the first five months of 2022, there are now 192 BEV chargers across 51 banks in California, Florida, Georgia, Illinois, Maryland, Massachusetts, New Jersey, Oregon, Virginia, and Washington. In addition to expanding at existing locations, both companies are looking to add more charging stations in new states including Colorado, Connecticut, Indiana, North Carolina, New York, Oklahoma, and Texas.

Aron Levine, president of Preferred Banking at Bank of America said this partnership is part of his company’s commitment to a sustainable future and is part of the way it serves clients and the community. “Through our collaboration with Electrify America, we’re making life easier for the communities we serve and are helping lead toward a more sustainable future,” added Levine.

Bank of America is also an EV100 member and provides charging station access to its employees at work. It has added chargers at more than 100 locations for employees to use as part of its workplace improvement program that started in 2017. The company also recently announced a grant to fund BEVs for Detroit’s Wayne Health Mobile unit alongside financing activity targets for 2030 as part of its net-zero commitment.

Electrify America aims to have more than 1,800 charging stations with more than 10,000 individual chargers in the United States and Canada by 2026. This is part of a $2 billion investment in growing the infrastructure for zero-emissions vehicles, making BEVs more accessible, and educating consumers regarding their benefits. The program will create a nationwide network of DC chargers aimed to make electrified mobility viable and reliable. Electrify America will expand across 49 states and Washington D.C. to accelerate BEV adoption.

In addition to expanding the charging network, Electrify America is working on new station concepts aimed at improving the customer experience. Planned for installation between 2022 and 2023, the newly designed stations will be added in select cities first including Santa Barbara, San Francisco, San Diego, Beverly Hills, Manhattan, and Brooklyn. These will join the two flagship locations in Baker and Santa Clara, which are in California. Some of the new additions include a lounge for customers while waiting for their vehicle to finish charging, curbside delivery, vehicle showcase areas, and event spaces. Solar awnings are also being added at 100 stations throughout the U.S. to provide additional power for the on-site battery storage system.