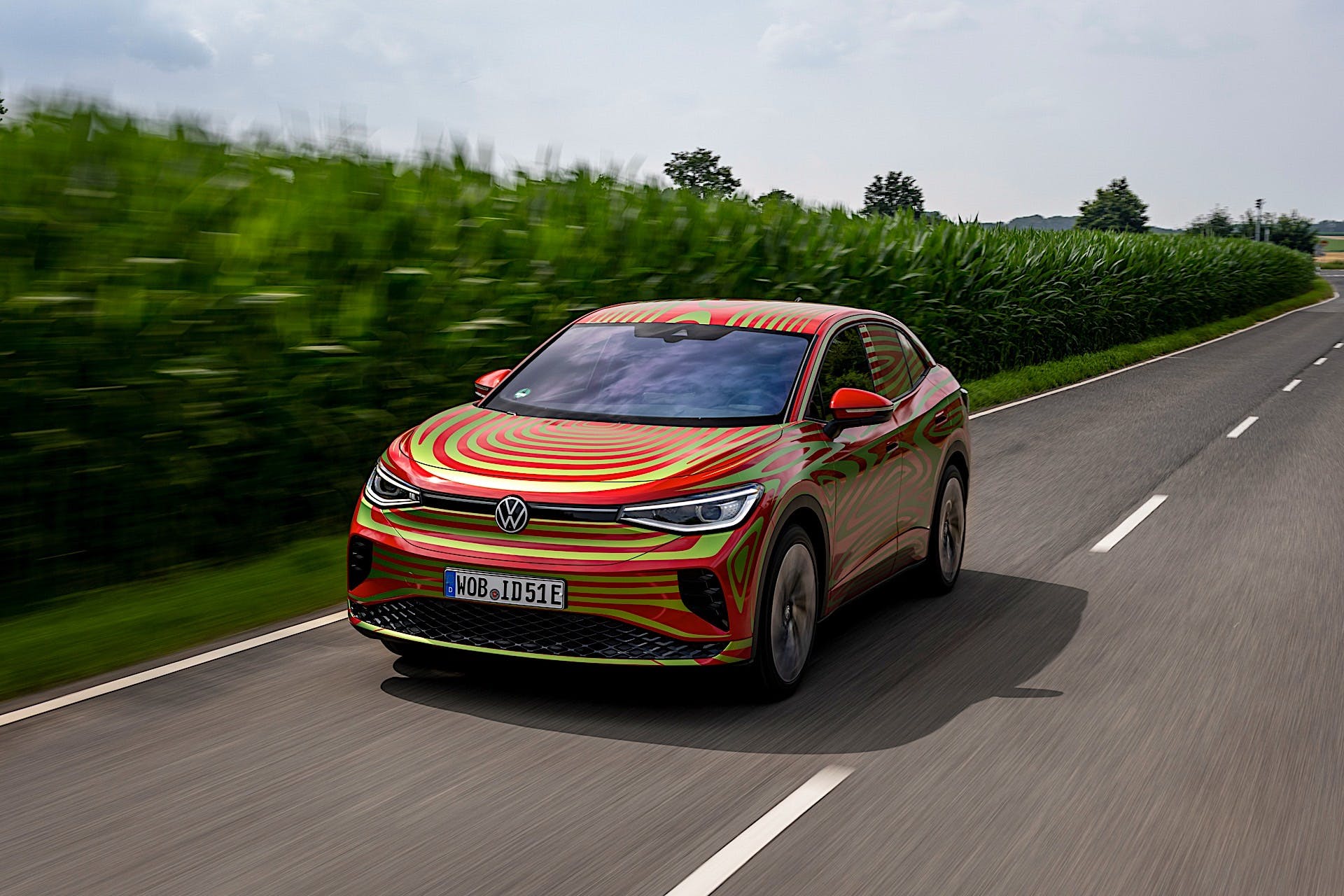 Volkswagen’s latest addition to its all-electric lineup will greet the public at the 2021 Munich auto show as a production-ready concept. The Volkswagen ID.5 GTX “Concept” is a preview of the final iteration, which is scheduled to go on sale in Europe early next year. Think of the ID.5 as a coupe-ified version of the ID.4 crossover, which means it has a different roofline and the rear window descends quickly, giving it a raised sedan look.

Looking closely at the psychedelic-colored concept, the Volkswagen ID.5 looks similar to the ID.4 from the front. The headlights are the same but the lower part appears to have been changed slightly. You see the differences most on the side profile and the rear thanks to the revised roofline. As a result, you get more of a liftback type hatch, giving the ID.5 a silhouette that’s closer to a sedan than a traditional two-box that’s more common among crossovers. You also find a spoiler in the rear; however, the taillights and lower rear fascia appear similar to the ID.4’s.

Despite the coupe-like roofline, the ID.5’s greenhouse doesn’t appear to have changed. As a result, it looks more upright than other crossovers like the BMW X4 and Mercedes-Benz GLC Coupe. The ID.5 can be mistaken for a tall sedan because of the way Volkswagen decided to shape the crossover’s profile. Once you get past the C-pillar, the roofline descents, which results in the ID.5’s less boxy looks.

The first version of the ID.5 to get introduced will be the GTX. That means it’s a dual-motor version with AWD and a sportier calibration. There’s also a GTX version of ID.4 but in the U.S., it’s merely marketed as the ID.4 AWD. That model makes 295 hp from its two electric motors and we suspect that the ID.5 will also have the same output. Volkswagen says the ID.5 can travel up to 497 km or 308 miles in the WLTP cycle, which is less conservative. The ID.4 is EPA-rated for 250 to 260 miles in RWD form or 240 to 249 miles with AWD.

In addition to the dual-motor GTX variant, the Volkswagen ID.5 will likely get a single-motor version. Like the ID.4, it’ll be RWD and less powerful at 201 hp and 229 lb-ft. In return, the single-motor ID.5 will likely travel a longer distance than the AWD version. The ID.5 should use the same 82-kWh battery as the ID.4. It will also be the latest vehicle on Volkswagen’s MEB platform.

Unfortunately, the Volkswagen ID.5 isn’t coming to the North American market. The crossover is reportedly only staying in the European market. In North America, Volkswagen will have two EVs in its lineup: the ID.4 and the upcoming ID. Buzz, which is scheduled to arrive by 2024. In Europe, the ID. Buzz will be available in passenger and cargo variants. Volkswagen is also expected to add a second crossover later in the future, a three-row called the ID.8, which is reportedly tailored specifically for North America.