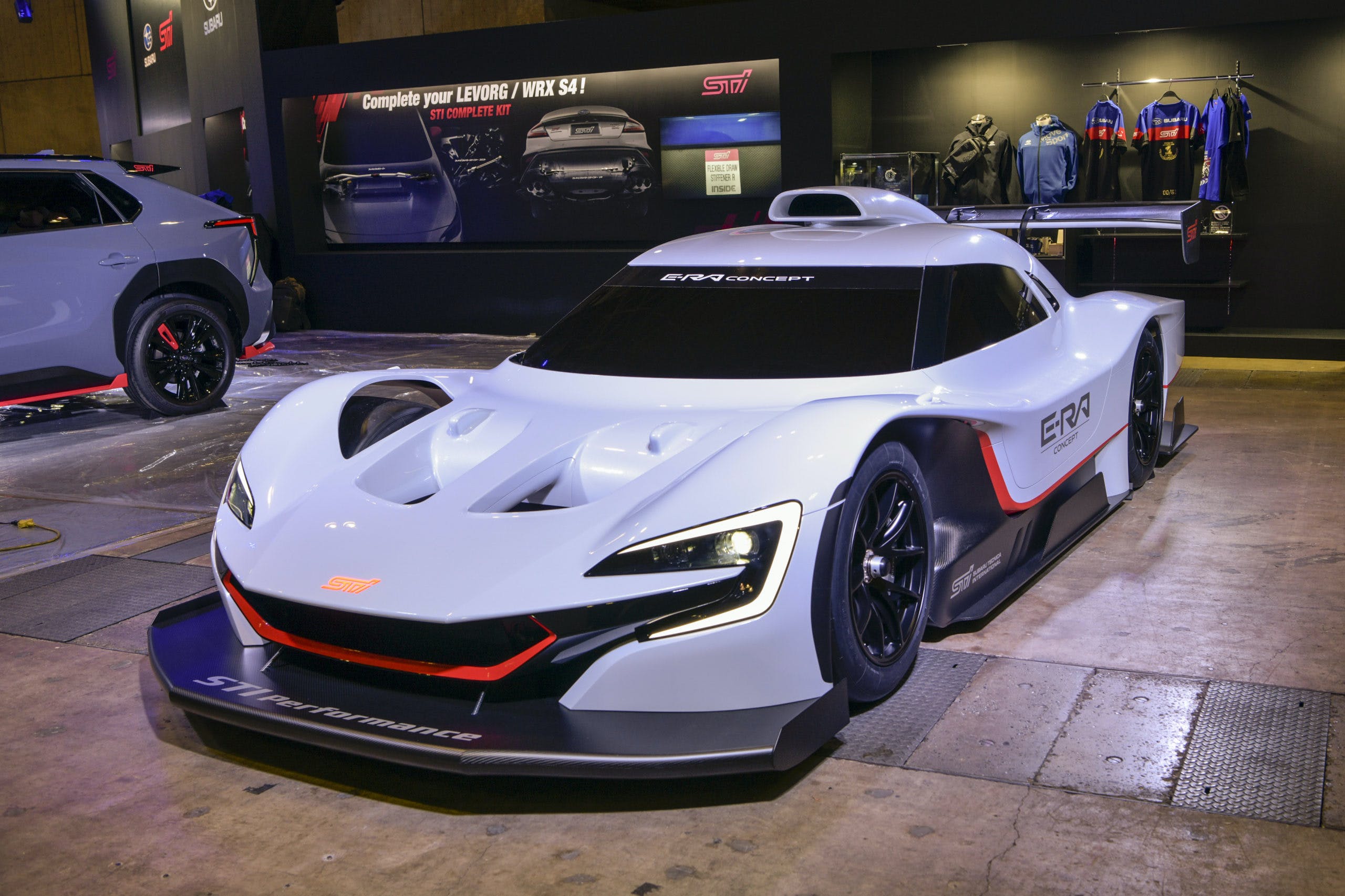 Subaru used the 2022 Tokyo Auto Salon to reveal what it calls a “near future motor sport study project.” Called the Subaru STI E-RA Concept, this prototype is being developed to gain experience in creating race cars for the carbon-neutral age. STI, Subaru’s performance arm, said that the first goal of the E-RA Concept is to attempt a record lap time of 6 minutes and 40 seconds on the Nürburgring Nordschleife starting in 2023. It will do this after multiple driving experiments, which include testing in circuits in Japan throughout 2022.

To get the most out of the Subaru STI E-RA Concept, it takes advantage of the company’s AWD expertise and applies it to a race car. It uses four electric motors making a total of 800 kW or 1,073 hp combined. The E-RA Concept also comes with Subaru’s proprietary four-motor, four-wheel torque vectoring technology. Subaru uses four high-torque, high-revolution units with integrated inverters and a gear specifically for high-performance battery-electric vehicles. These units were codeveloped in partnership with Yamaha. Backing the four electric drive motors is a 60-kWh lithium-ion battery.

Subaru’s torque vectoring system ensures optimum grip at every wheel and maximizes vehicle stability. This is done by independently applying the exact amount of drive torque to each wheel depending on how the load shifts. The system takes into consideration wheel speed, vehicle speed, steering angle, G-force, yaw rate, brake pressure, and wheel load to determine the ideal drive/brake torque needed at each wheel. Each electric motor is attached directly to the wheel, enabling high response levels and direct control of the car’s yaw.

STI plans to use the knowledge gained through the development of the E-RA Concept to improve its race cars. Additionally, the insight gained through this program will also influence future Subaru road cars as the company moves toward full electrification and aims to maintain the safe and comfortable driving experience it’s known for. Don’t expect Subaru to produce a production version of the E-RA Concept because this is likely similar to Hyundai’s mid-engine RM cars, which are essentially used only for testing future propulsion systems.

In addition to the STI E-RA Concept, Subaru also brought the Solterra STI Concept to the 2022 Tokyo Auto Salon. This iteration of the electric crossover gets some major cosmetic upgrades including Cherry Red side sills, front bumper accents, and rear bumper accents. It also comes with black alloy wheels, a black STI roof spoiler, and black trim just after the rear window. There also appears to be more body cladding on the lower parts of the car and a revised lower front fascia with different fog lights.

The U.S.-spec 2023 Subaru Solterra will be available only in dual-motor configuration. It has a combined output of 215 hp and 248 lb-ft of torque, and an expected estimated range of 220 miles on a single charge. Subaru hasn’t revealed the battery size but we suspect it’s the same 72.8-kWh unit found in the AWD version of its sibling, the Toyota bZ4X. In other global markets, the Solterra will be available in a single-motor configuration with a 71.4-kWh battery and 201 hp. This version should be able to travel farther on a single charge.