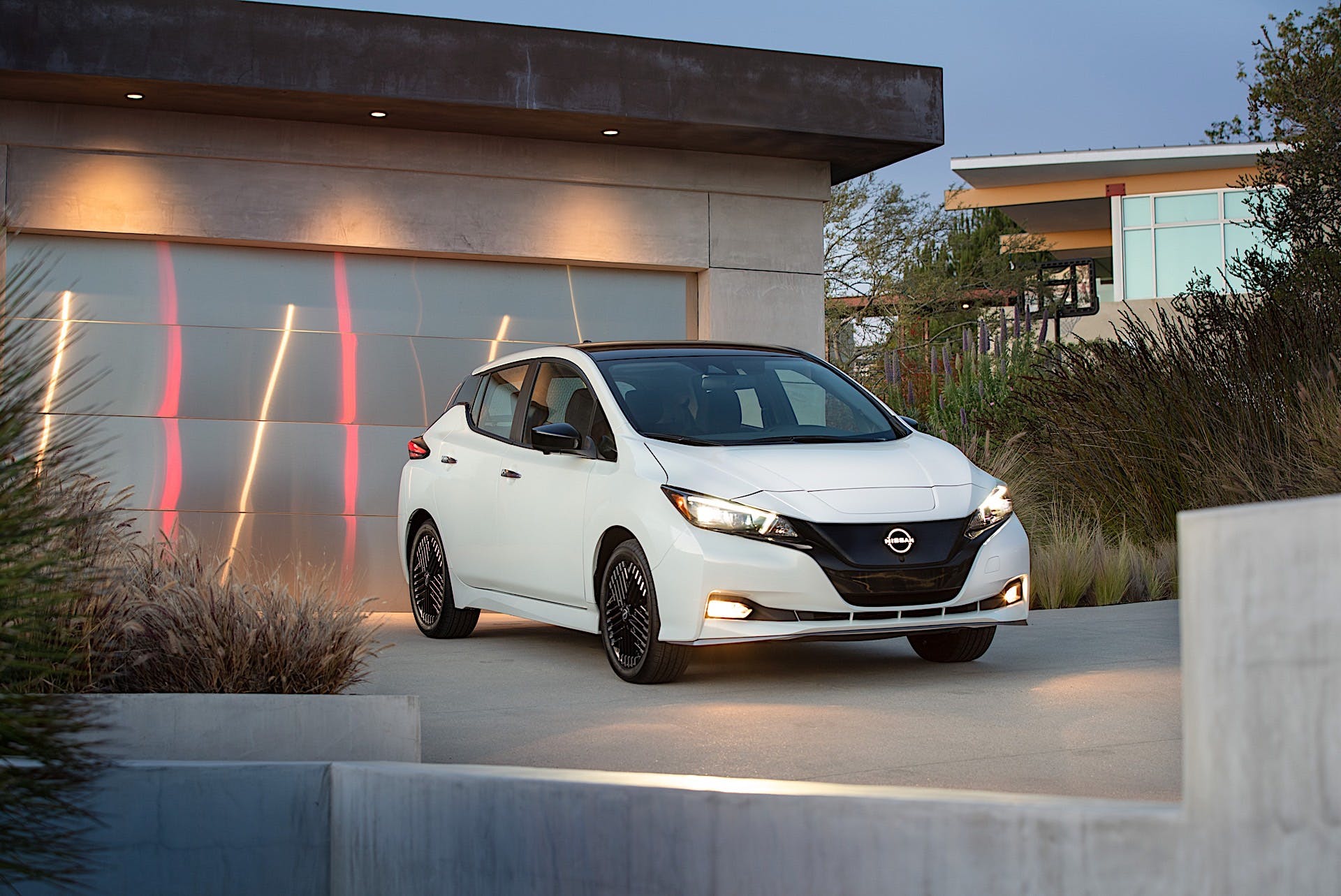 The refreshed 2023 Nissan Leaf has arrived in North America at the 2022 New York Auto Show sporting a lightly tweaked look just like the European-spec model. That means the chrome V pattern in the enclosed grille is gone and you now have headlights that have been reshaped ever so slightly. Nissan’s new logo has also found its way to the new Leaf on the front fascia, hatch, and steering wheel. The one on the front of the car also lights up. Fresh alloy wheel designs are also included with the larger 17-inch multi-spoke units sporting a pattern similar to what first appeared on the Chill-Out Concept.

Perhaps the biggest news with the 2023 Nissan Leaf is the lineup getting consolidated to two trims. The entry-level S trim gets the smaller 40-kWh battery pack and an electric motor putting down 147 hp and 236 lb-ft of torque to the front wheels. Moving up to the SV Plus grade gets you the 60-kWh battery and a more powerful electric motor generating 214 hp and 250 lb-ft. Expect EPA range estimates to mimic the 2022 model at 149 miles per charge for the S trim and 215 miles for the SV Plus. The previous range leader was the Leaf S Plus, which was good for 226 miles per charge thanks to it using 16-inch wheels with narrower tires.

Using a DC charger, the standard Leaf can DC charge to 80 percent in 40 minutes while the Plus model with the bigger battery does the same deed in 45 minutes. A level AC charger or 240-volt outlet will get you a full charge in 7.5 hours in the standard model or 11.5 hours in the Leaf Plus via a 6.6-kW onboard charger. The Leaf is one of the last vehicles to use the CHAdeMO DC charging standard in the U.S. alongside the Mitsubishi Outlander PHEV. Nissan recently switched to the CCS combo plug on the new Ariya. Peak DC charging speeds on the Leaf are limited to 50 kW due to it using an air-cooled battery.

The 2023 Leaf will offer the usual array of driver assistance features. If you want Nissan’s ProPilot Assist semi-autonomous system, the SV Plus is the only one that gets it. This combines adaptive cruise control, traffic jam assist, steering assist, and lane centering to ease long drives and commutes. However, the version used in the Leaf can’t use data from the built-in navigation system to detect turns and on-ramps. A newer version called ProPilot 2.0 can help navigate you to your destination and allow for hands-free driving. This latest version, which also includes automatic lane changing, is going to be available initially in the Ariya in the U.S.

With the consolidation of the Leaf lineup to two models for 2023, it’s now positioned to be among the most affordable battery-electric vehicles on the market. The 2022 model is already affordable with a starting price of $28,425 while the range-topping SL Plus checks in at $38,425. Now that the SV Plus is the new range-topping trim, the top-end price should come down once again. It currently costs $36,425 and is already a good value. The eight-speaker Bose audio system could trickle down to the new range-topper since it’s the only major feature not available on the SV Plus.