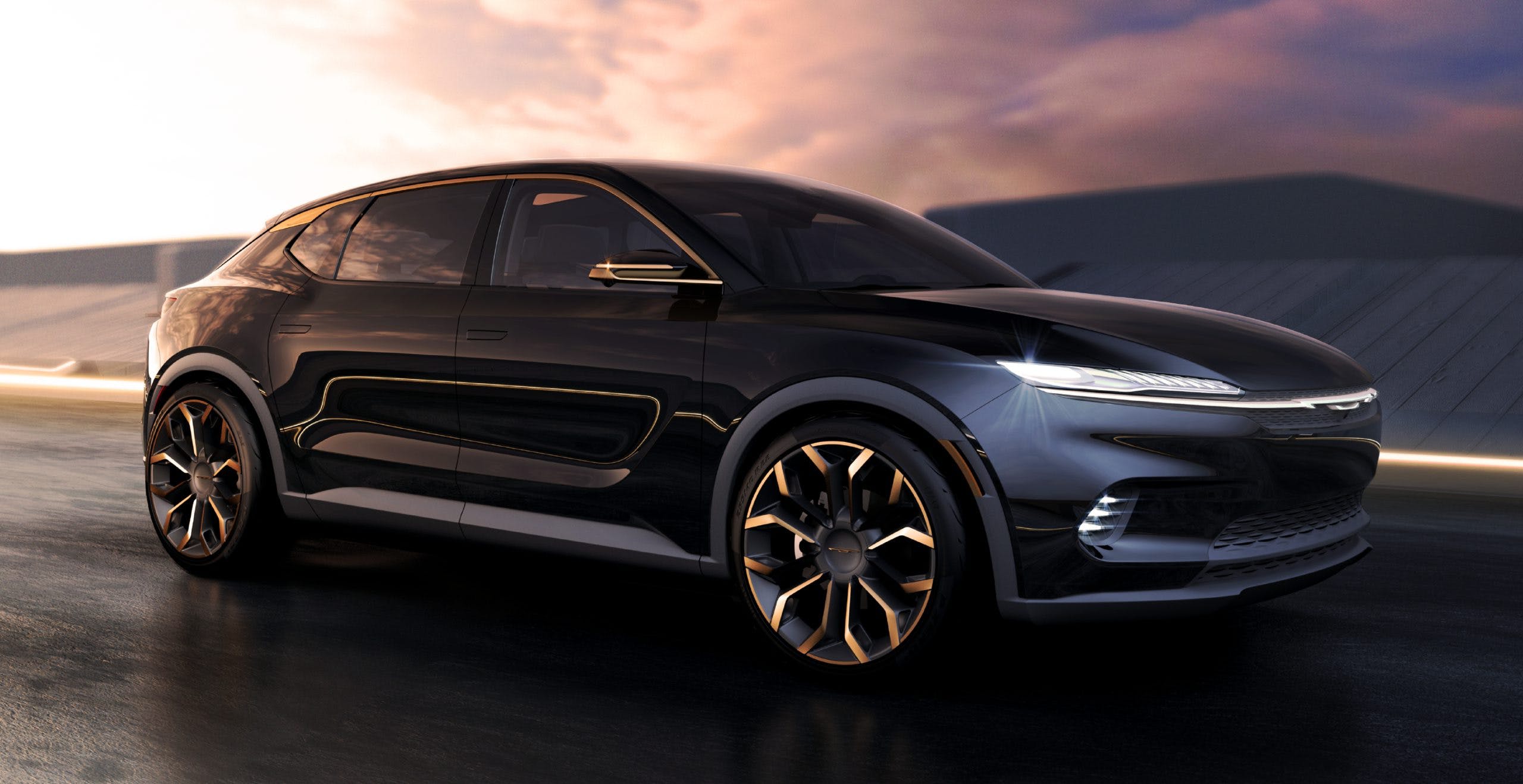 Chrysler is giving us another look at the Airflow Concept at the 2022 New York Auto Show but with some notable tweaks. Called the Chrysler Airflow Graphite Concept, the exterior is now finished in Galaxy Black to contrast with the original Arctic White show car that debuted at the 2022 CES Show in January. This new look is inspired by urban landscapes particularly the skylines of big cities. It is complemented by Cyprus Copper accents on many parts of the exterior and the 22-inch alloy wheels.

The Chrysler Airflow Graphite Concept’s interior sports a contrasting black and white theme complemented by Cyprus Copper accents. This evokes a lounge-like experience and enhances the feeling of spaciousness. Sustainable materials are used extensively and are combined with a calming color palette to make the cabin exude a premium aura but in a subdued way. The leather, for example, is tanned using plant-based materials while certain fabrics and carpeting are made of recycled materials.

One of the Airflow Graphite Concept’s neatest design cues is the new Chrysler wing logo. It is now tied with the crystal LED light blade spanning the entire enclosed grille. The lights feature unique welcome and departure animations and turn to aqua blue when the vehicle is charging. Inside, you’ll find crystallized textures in touchpoints that add to the premium ambience when combined with new, lighter metal trim.

Like the car shown at the 2022 CES Show, the Chrysler Airflow Graphite Concept uses the STLA Brain and STLA SmartCockpit systems. The former is the backbone of the user experience and serves as the new electrical/electronic (E/E) and software architecture. Its flexibility breaks the bond between hardware and software generations, meaning you don’t need new hardware to get the latest software in existing vehicles. Over-the-air (OTA) update capability keeps the vehicle fresh and up to date because the automaker can easily add new features to enhance the ownership experience.

STLA SmartCockpit is built on top of the STLA Brain architecture. It allows for seamless integration of occupants’ digital lives and delivers artificial intelligence-based applications like navigation, voice assistance, an e-commerce marketplace, and payment services. This will serve as the next-generation infotainment system for future Stellantis vehicles across all brands.

The Airflow Graphite Concept previews Chrysler’s commitment to becoming a fully electric brand by 2028. It will also move to clean manufacturing processes and make extensive use of renewable and recyclable materials. Two electric motors making a combined output of 300 kW or 402 hp power the Airflow Graphite Concept and give it AWD. Chrysler says it can accommodate larger electric drive motors, hinting at future high-performance variants. On a single charge, the crossover can travel up to 400 miles but Chrysler didn’t disclose its battery capacity. We suspect both Airflow concept cars are on the STLA Medium platform since that’s good for up to 440 miles. They also come with the STLA AutoDrive, a level 3 autonomous driving system that can be upgraded via OTA updates.

Although it’s still a show car at this point, it’s becoming more obvious that the Chrysler Airflow Graphite Concept and its predecessor preview the brand’s upcoming battery-electric vehicle. With so much of the vehicle being so close to production, we wouldn’t be surprised if it made it to production with very few changes.