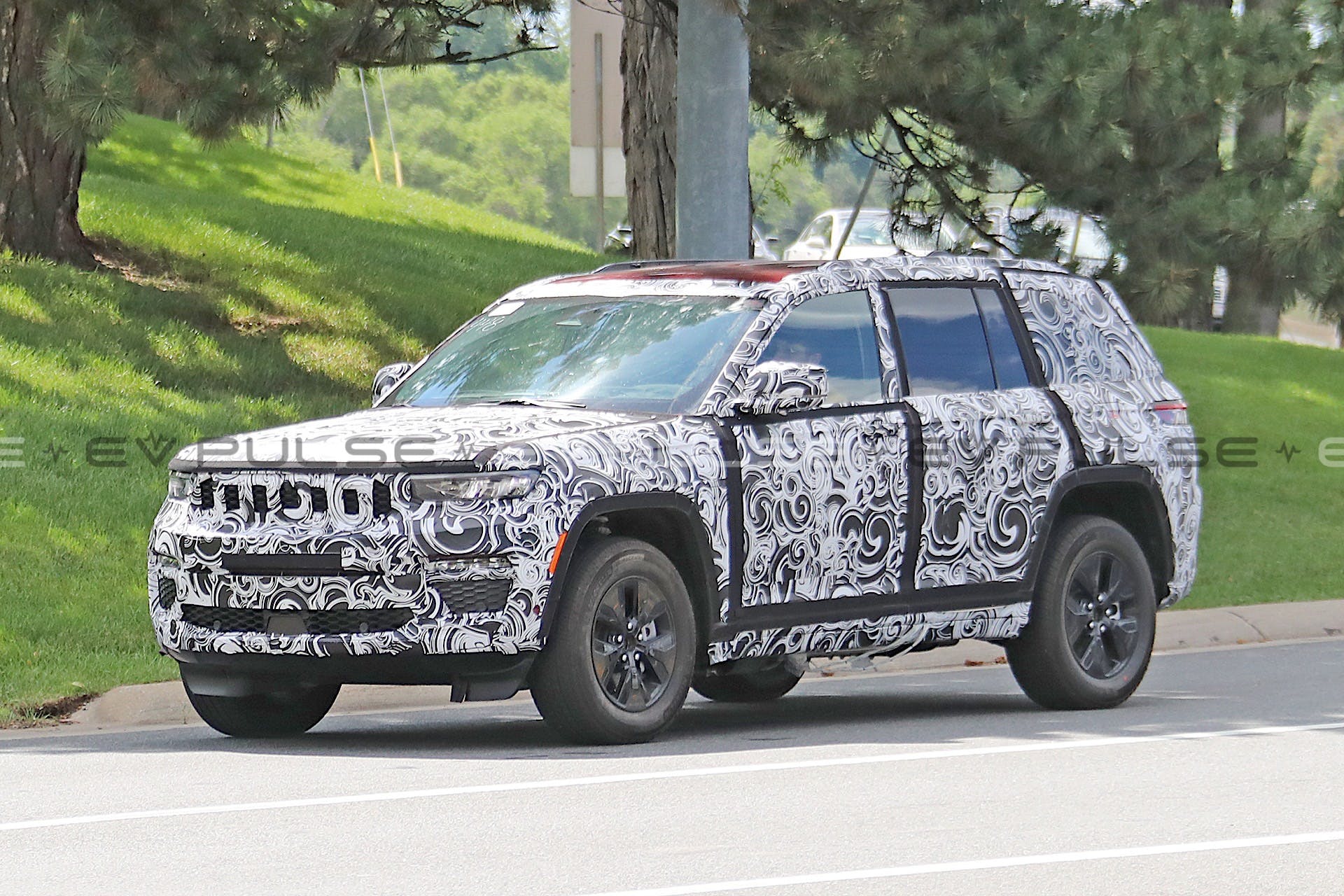 The new Jeep Grand Cherokee is a serious contender is the mid-size SUV space. The long wheelbase 3-row version is nearing Range Rover level of luxury. But only a V6 and a V8 aren’t going to cut it as the company, and the world, moves toward electrification.

That’s why you’re looking at the latest in the electrified Jeep lineup. This is a standard 2-row Jeep Grand Cherokee 4xe; the first plug-in hybrid Grand Cherokee.

Spied by our crack spy photographer team in Metro Detroit, you can easily tell that on the driver’s side fender there is a door for the plug. An additional telltale sign is the aero-focused wheels to help overall fuel economy.

Expect the Grand Cherokee 4xe to be powered by the same 4xe system in the Wrangler and upcoming Gladiator. That’s a 2.0-liter turbocharged gasoline engine mated to an electric motor. It’s good for 375 horsepower and 470 lb-ft of torque.

This is also a first glance at the 2-row Grand Cherokee, which we believe will be the only way the 4xe GC will come. There’s a more angular front end, which makes it look a bit sportier and also surely helps with aero. The rear is also more slanted since Jeep doesn’t have to accommodate headroom for a 3rd-row.

The rumor mill is also suggesting that there’ll be a new V6 for the Grand Cherokee that’ll sport the company’s E-Torque 48v mild hybrid system, but beyond the speculation we aren’t sure if or when we’ll see that setup. There’s also no word if this will eventually spawn a Trackhawk version, though Stellantis is focused more on being green these days.

As we said earlier, the Grand Cherokee L drives fantastic and features an amazing audio system from McIntosh. This author recently spent the day both on and off road and was quite impressed with the offerings. During that time, Jeep also confirmed the 4xe coming in a slideshow presentation at the Mack Assembly plant.

Now when will the Grand Cherokee 4xe make its debut? We’re about 99% certain that Jeep will pull the covers off of it in August at the New York International Auto Show, along with the entire Grand Cherokee lineup.

If our sources are correct, the Grand Cherokee 4xe will be the 3rd 4xe vehicle to debut. We’re expected to see the Gladiator 4xe to make a debut shortly at the Chicago Auto Show.

The Grand Cherokee will be built at the new Mack Assembly in Metro Detroit and should go on sale in the fall. Stellantis’s Grand Cherokee Jeep production hasn’t been hit with issues regarding the semiconductor shortage.

Pricing is unknown at this point, but it’s safe to assume it’ll carry a similar markup as the Wrangler. As of now, though, Stellantis is still eligible for a full $7,500 federal tax incentive, which could make the Grand Cherokee 4xe the most cost-effective GC to get into when it goes on sale.

We’ll be sure to bring you all the latest as we learn more, but in the meantime check out these spy shots and let us know what you think in the comments section below.