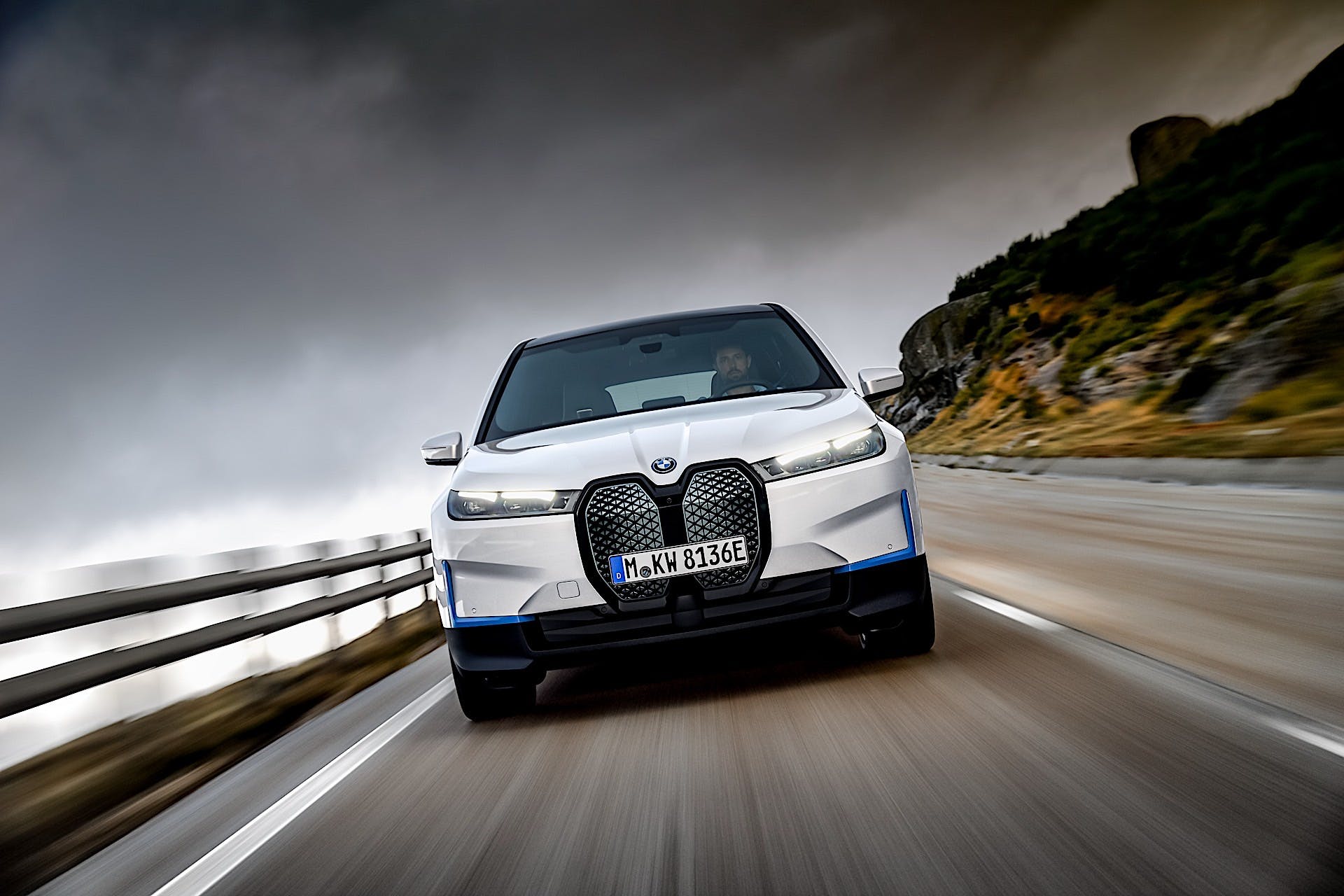 The 2022 BMW iX will have one of the longest driving ranges with all variants rated over 300 miles. With the standard 20-inch alloy wheels, the iX is rated at 324 miles. Oddly, the optional 21-inch alloy wheels cut the range down the most to 305 miles while examples equipped with the 22-inch units travel farther at 315 miles.

The closest competitor to the BMW iX is the Tesla Model X. Long Range variants are EPA-rated at 348 miles per charge. Plaid models are good for 333 miles when equipped with 20-inch wheels or 311 miles if you go for the 22-inch units. Newer examples of the Model X are also able to DC charge at peak rates of 250 kW. A second close competitor is the Jaguar I-Pace, which is EPA-rated for 234 miles per charge. However, it’s less powerful at 394 hp and 512 lb-ft. It also DC charges slower, peaking at only 100 kW. The I-Pace’s coupe-like exterior also limits interior space and practicality.

Audi’s e-tron SUV and Sportback models are also close competitors but they’re less powerful and don’t travel as far. The SUV is good for 222 miles while the Sportback checks in at 218 miles. If you go for the more powerful e-tron S with its three electric motors, you get even less range. With the 20-inch wheels, the e-tron SUV is good for 208 miles per charge while the Sportback can travel 212 miles. Go for the optional 21- or 22-inch alloy wheels with summer tires and the driving range drops farther to 181 miles for the SUV and 185 miles in the Sportback. The e-tron’s peak charging rates are also lower than the iX’s at 150 kW.

More competitors are coming in 2022 with the arrival of the Cadillac Lyriq, which will have over 300 miles of range but less power. Mercedes-Benz will introduce the EQS SUV on its dedicated battery-electric vehicle platform that’s already in use on the EQS sedan. Audi will eventually replace the e-tron SUV and Sportback with the Q6 e-tron, which will be on the PPE architecture shared with the upcoming all-electric Porsche Macan.

The 2022 BMW iX will get a high-performance variant later this year. Called the iX M60, it reportedly has 600 hp and will be the first M Performance all-electric crossover. Like many higher-end BMW models, the iX makes extensive use of aluminum body structure to increase rigidity without increasing weight. Carbon fiber reinforced plastics and high-performance thermoplastics are also used in combination with high-strength steel and aluminum components. Alongside the i4 Gran Coupe, the iX will be part of an all-electric lineup that will eventually include the i5 and i7 sedans, and an all-electric X1. Pricing for the iX starts at $84,195.

Written by Stefan Ogbac
Follow Author
RELATED ARTICLES
2022 BMW i4 EPA-rated for up to 301 miles per charge
2022 BMW i4 M50 is the brand’s first all-electric safety car
2022 BMW i4 electric sedan can travel up to 300 miles and starts under $60,000
Do I need a Level 2 home charger for my Toyota Prius Prime?
RELATED ARTICLES
JOIN THE EV PULSE NEWSLETTER
Receive weekly updates on each of our electrifying articles.