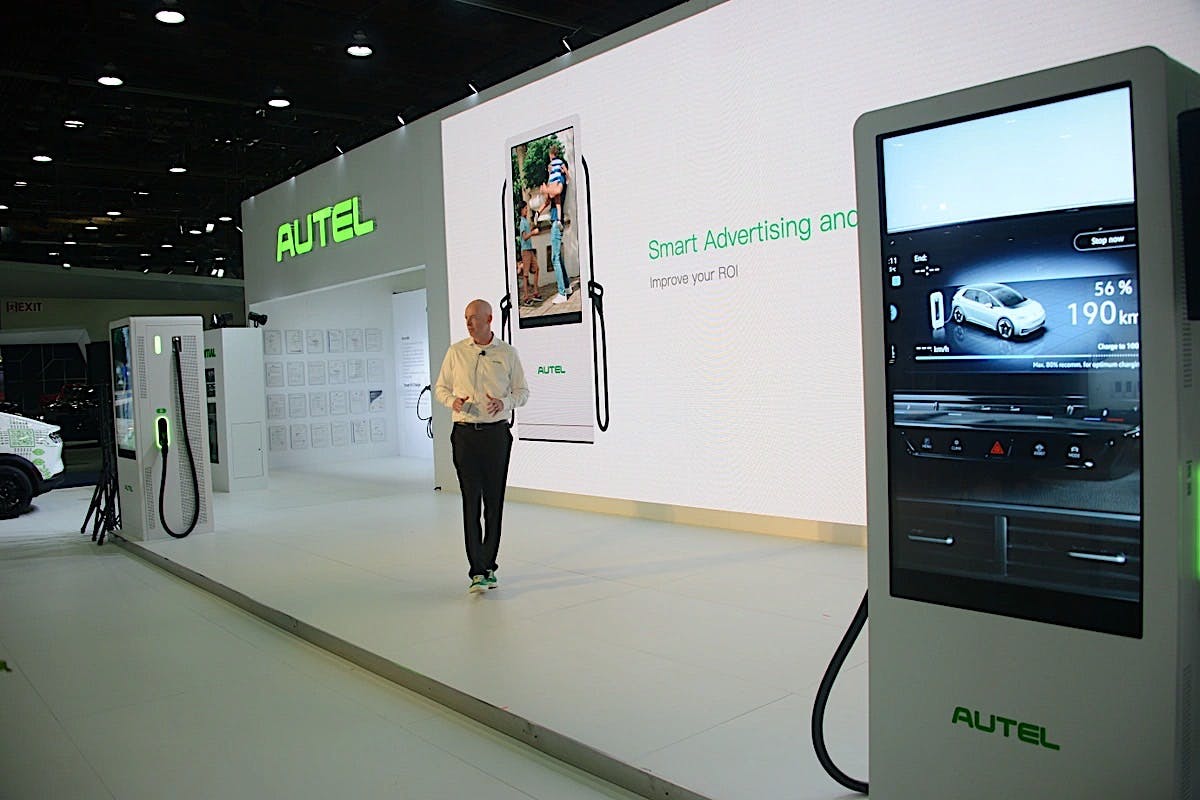 Autel Energy is a company you might not have heard about, but if you attend this year’s North American International Detroit Show, you’ll learn quickly who they are. They have a massive, Apple store-esque, display for the public to see loaded with products.

“We offer the highest power products with the best warranty,” Autel’s COO John Thomas tells us during an interview shortly after President Biden’s visit.

And what are those products? Like many charging companies, Autel offers home and commercial charging solutions. The selling point is features, warranty, and appearance.

A quick glance around the massive display shows a lot of thought and care went into the design. Bright LCD displays adorn some of the commercial units — operators can offset charging costs by showing advertising — and displays show how the company wants the world to operate with a smart charging grid.

That’s where Autel gets really exciting. We’ve highlighted some of the efforts Ford is making in grid management, and Autel is of the same mindset. “We want to manage the entire ecosystem,” Thomas says. “We want to be able to do things like eventually integrating with smart meters to have finite control over power usage.”

In states where power companies charge by demand along with energy use, peak shaving is important.

This requires a ton of smarts, and functioning deals with power companies and end users to give up some control to the computer. But where it all gets fun is with the V2X charging equipment Autel has.

Designed to work with any vehicle, Autel’s charger can deliver up to 12 kW of energy flow BACK to the power grid. You wouldn’t have to own a Ford Lighting to take advantage of this generator functionality — though we imagine the vehicle would have to support V2L — and you wouldn’t have to have the OEM’s preferred charging hardware.

Being able to return power to the power grid, and not just your house, during peak demand times helps stabilize the grid preventing brownouts and blackouts. We often hear people say that EVs will kill the grid. Smart management like this will save it.

“Education is a big hurdle,” Thomas admits. Indeed. But that’s why big displays like this at a large-scale consumer auto show are important. But it’s also important for getting his brand out there.

While more well-known charging companies, like ChargePoint or Enel X with JuiceBox, are household names at this point, they also work out deals with carmakers that can limit outside competition. Autel’s goal is to change some minds in Detroit before the end of this week’s auto show.

What we get excited here at EV Pulse about isn’t just more competition in the charging space — because more competition is great — but because these companies are putting in the legwork to not only make the grid support EVs, but make it more resilient overall.