Porsche Taycan vs. Audi e-tron GT: How different are they? 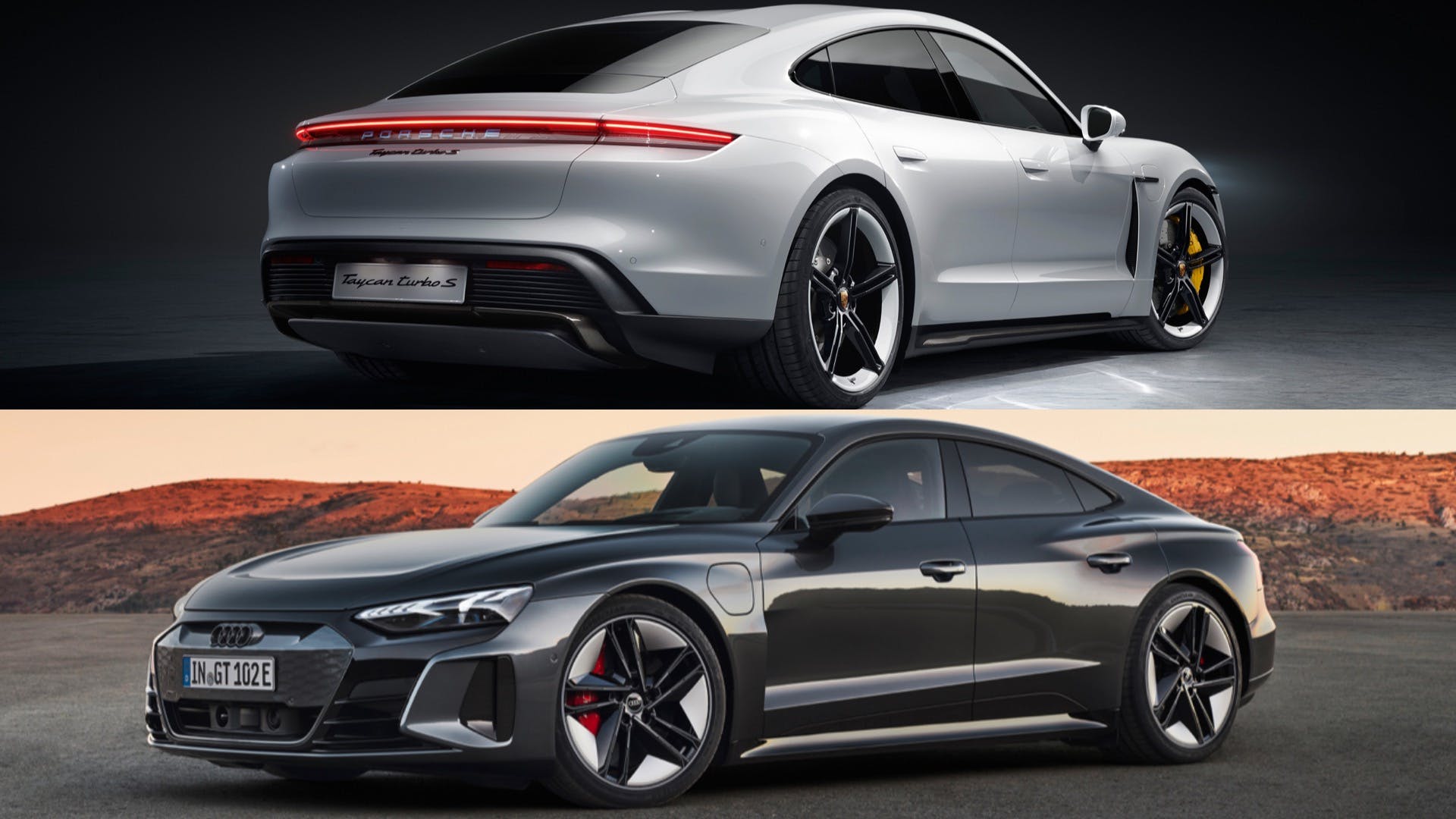 Another luxury sedan joins the all-electric club. The Audi e-tron GT adds a new choice for those wanting to ditch fossil fuel yet still care about performance and luxury. Developed closely alongside the Porsche Taycan, you may be wondering how different is the Audi? What makes the e-tron GT stand out from its platform-mate? We’ve got a whole rundown detailing what makes this latest Teutonic four-door unique.

Immediately, you’ll notice the differences in exterior design. Although both the Taycan and e-tron GT have similar greenhouses, the latter is distinctly an Audi in terms of looks and hasn’t changed much on its journey from concept to production. It’s slightly more curvaceous but not so much so that the car no longer looks like a member of the Audi family. You get rectangular headlights and a reinterpretation of the single-frame grille, which has smaller openings since EVs don’t require as much cooling. The Taycan, on the other hand, is unmistakably a Porsche. You get that distinct front fascia with thin rounded headlights with quad LED daytime running lights. You find more curves throughout the Taycan’s exterior, giving a svelte profile versus the more muscular e-tron GT.

Audi’s interiors are well known for their build quality and minimalist layout. The latter is in full display in the e-tron GT, which features a familiar yet futuristic look. You get Audi’s Virtual Cockpit and the MMI interface with a 10.1-inch touch screen. There are physical controls, too, which should cut the infotainment system’s learning curve significantly.

In comparison, the Porsche Taycan’s cabin highlights the tech front and center. Multiple displays are blended with a digital version of Porsche’s traditional gauge cluster design. Unlike the e-tron GT, the Taycan ditches all buttons except on the steering wheel to create a clean, uncluttered appearance. In total, the Taycan can be equipped with up to four screens if you opt for the optional passenger’s side display.

Initially, the Audi e-tron GT will be offered in dual-motor AWD configurations backed by a 93.4-kWh lithium-ion battery. The standard model makes 469 hp (523 hp during overboost) and 465 lb-ft of torque while the high-performance RS variant is good for 590 hp and 612 lb-ft (637 hp on overboost). A less powerful version could also be coming but don’t expect it to put the power down to only two wheels because AWD is one of Audi’s distinguishing features.

Currently, the Porsche Taycan is available in four flavors including the RWD base version. As a result, there’s a wide variety of performance levels on the Taycan ranging from the base model with 321- to 375 hp and 254 to 263 lb-ft up to the bonkers Turbo S, which generates up to 750 hp and 774 lb-ft on overboost. Turbo and Turbo S models get a 93.4-kWh battery standard while the base and 4S versions have it as an option.

The addition of a single-motor RWD model cut the Taycan’s starting price significantly. At $81,250, that’s significantly less than an Audi e-tron GT Premium Plus, which starts at $99,900 before destination charge. A Taycan 4S would be the most direct equivalent to the e-tron GT. However, you must pay $5,570 extra for the larger 93.4-kWh lithium-ion battery on the Porsche. On the base Taycan, the bigger battery is a $5,780 option. The more powerful RS e-tron GT starts at $139,900 before destination, which is less expensive than a Taycan Turbo at $152,250.

Although the Audi e-tron GT costs more, you get the bigger battery as standard. The Porsche Taycan has it optional on the base and 4S models, making the latter pricier than the e-tron GT. RWD Taycan models will remain cheaper in the meantime, even when equipped with the optional big battery. Turbo and Turbo S models, which get the 93.4-kW battery standard, will be more expensive than the RS e-tron GT. However, that extra cash gets you potent performance, especially in Turbo S guise. The way each one drives should differ, too, because Porsche tends to calibrate their vehicles more for all-out performance without compromise. In comparison, the Audi e-tron GT appears to be more of a grand tourer, meaning it’ll likely be more compliant and excel as a cruiser than a canyon carver.