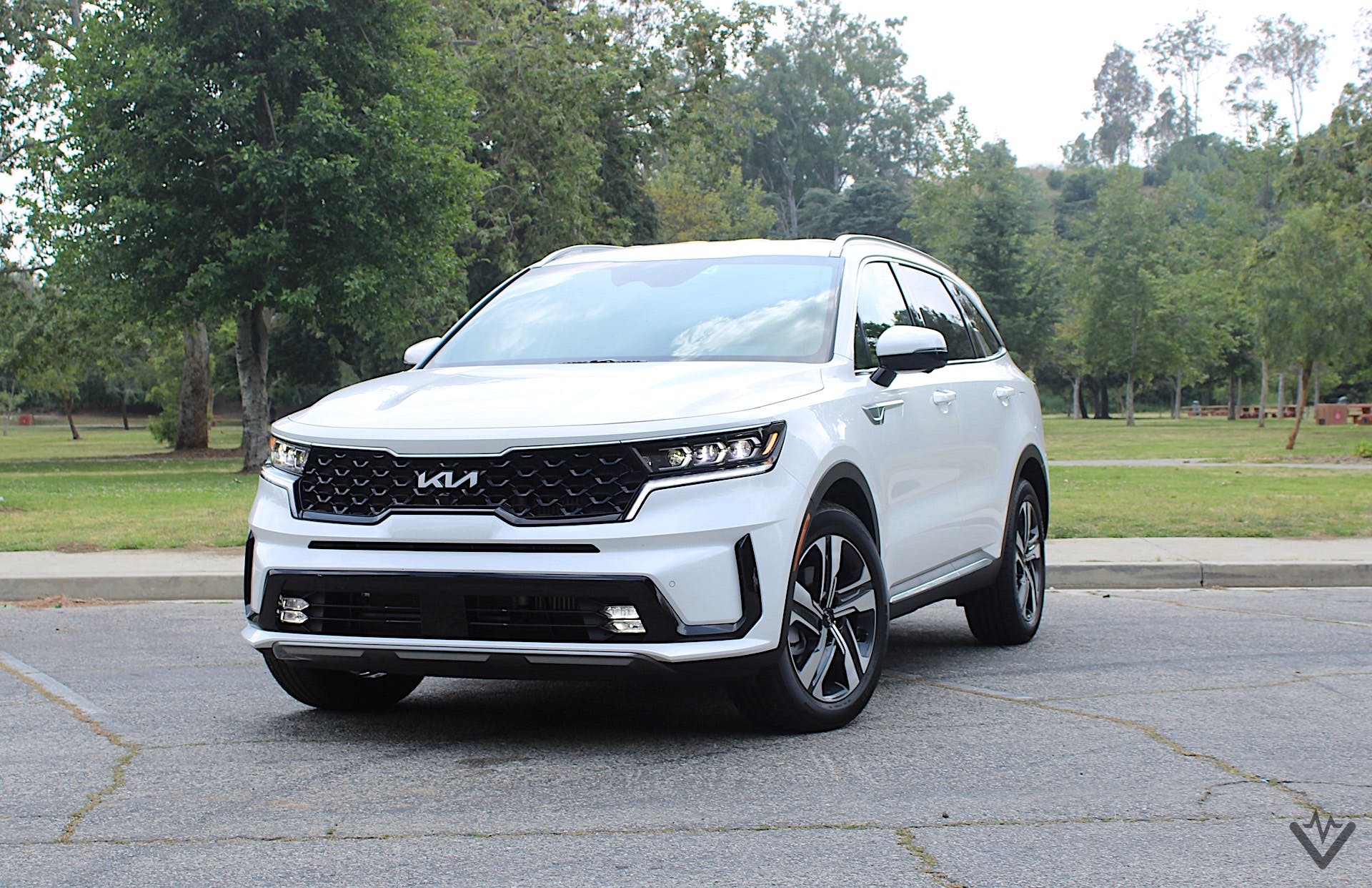 Electrifying the Sorento was a genius move on Kia’s part. It took an already compelling package and made it even more appealing by adding efficiency to its strengths. There’s still part two to that story because a version with a plug is now available nationwide. The 2022 Kia Sorento PHEV takes all the goodness of this tweener SUV and gives you additional operational flexibility along with more power, four-season traction, and upscale appointments. Essentially, it’s like Goldilocks in car form but with pizazz. Or is it?

If you put a 2022 Kia Sorento PHEV next to a similarly configured internal combustion version, you’d need a magnifying glass to tell the difference. Other than a badge on the tailgate, it’s hard to tell the difference. That’s a good thing because it keeps the crossover looking sharp and classy. The model with the biggest change is the X-Line, which has a raised suspension and black alloy wheels but it isn’t available with electrified powertrains. You’ll need to settle for the luxury-oriented SX and SX Prestige grades for the plug-in Sorento since it essentially serves as an extension of the standard hybrid, which is only offered in S and EX variants.

Look closely throughout the Sorento PHEV’s interior and you’ll find lots of thoughtful touches plus a sprinkling of sophistication and restrained elegance. The fit and finish are top-notch with nice materials everywhere. This gives the crossover an upscale ambience, especially with the tritone Navy/White/Black interior and good levels of sound insulation even on the highway. There are lots of places for small items like the dual map holders behind each front seat, second-row mesh pockets, and big cubbies in the third row.

Since it slots between the compact and mid-size three-row classes, the Sorento PHEV strikes that nice middle ground because you’ve got extra space but without the mass of a larger vehicle, amplifying the “just right” vibes. There are three rows but Kia didn’t try to squeeze any middle seats, limiting passenger capacity to six. The trade-off for this balancing act is that there’s not much cargo space with all seats up, meaning you need to pick between stuff or people. Should you need to put humans in the third row, make sure it’s only for short trips. The cushion is on the floor, resulting in a seating position with your legs bent at an awkward angle. You can slide the second-row forward and back but it’s still not enough to make the rearmost seats viable for longer drives.

As expected of a Kia vehicle, the Sorento PHEV’s infotainment system is intuitive. It’s modern and has a good blend of physical and haptic feedback controls. You get a 12.3-inch digital gauge cluster and a 10.25-inch touch screen, both of which are crisp and responsive. Neither one has excessive amounts of submenus, making it easy to navigate through the settings. If you’re looking to have an ASMR moment, this interface has the Sounds of Nature feature, enabling you to relax to the sounds of waves crashing, chirping birds in a rainforest, and people walking in the snow. For those who love blasting tunes on their drive, the 12-speaker Bose audio system is perfect; crisp, immersive, and easily customizable.

Kia’s driver assistance features work with a level of subtly that makes it among the best. It’s proactive with keeping your set distance when adaptive cruise control is active and the corrections are gentle. The blind-spot monitoring system even goes one step farther by showing what’s beside you when you activate the turn signal. Together with the suite’s overall lack of intrusiveness, you get seamless operation and the ideal level of assistance without feeling like the car is trying to take over driving duties.

The Sorento PHEV adds some extras over the standard hybrid: additional power and the ability to operate in all-electric mode. It uses the same 1.6-liter turbo-four and six-speed automatic transmission but the lithium-ion battery is a larger 13.8-kWh unit and the electric motor makes 90 hp, an increase of 30. As a result, the Sorento PHEV has the right amount of grunt to get it moving without any fuss. Between the turbocharged engine’s broad powerband and the electric motor’s instant torque, the crossover serves up 261 hp and 258 lb-ft of torque seamlessly and doesn’t get winded despite weighing over 4,500 pounds. Even when you point it up a steep hill or need to get up to speed quickly, it moves gleefully. The gearbox also responds willingly and gives you the right gear for every driving scenario.

You get a plug-in hybrid for its ability to travel in all-electric mode for short distances. The Sorento PHEV can travel for 32 miles before the gas engine kicks in. This provides extra flexibility because you can save your tank of dino juice for longer trips. In addition to the usual drive mode options, you can also choose fully electric or hybrid operations, giving you more ways to utilize the powertrain and maximize its efficiency. A full charge takes around 3.5 hours using a level 2 AC charger. That’s on the slower end because the onboard charger peaks at 3.6 kW.

Plug-in Sorentos get AWD standard, a mechanical unit with a drive shaft connecting both axles. This means you don’t get any clawing sensations when accelerating briskly because the system immediately splits power between the four wheels for optimum traction. Additionally, you get a sense of familiarity with the driving experience because it feels just like every other crossover. You can also lock the AWD system to split power 50/50 between the two axles, maximizing grip in loose or slippery conditions. However, the Sorento PHEV’s ground clearance is only 6.9 inches or 1.3 inches lower than X-Line variants, limiting how far it can go off the beaten path

One of the standouts in the driving experience is the ride quality, which strikes a nice balance between cushiness and firmness. Even with the standard 19-inch alloy wheels, the Sorento PHEV remains comfortable. You’ll know you’ve gone over potholes, ruts, and other types of road imperfections but you barely feel them. That’s because the suspension manages to dissipate most of the impact before they reach the passenger compartment. You’re not sacrificing confidence for the sake of comfort either. The Sorento PHEV doesn’t float and get wobbly once the road starts to turn or when driving over uneven pavement. Accurate, well-weighted steering adds to the overall solidity you get behind the wheel. Great body control gives you confidence when executing evasive maneuvers.

Brake pedal operation is linear in the Sorento PHEV. It’s soft but has a good level of firmness as you press further down. The best part is that you can’t tell where handoffs from regenerative to mechanical braking happen, resulting in seamless transitions. Although Kia didn’t tune this to allow for one-pedal driving, the energy recuperation remains strong, enabling you to gain back a couple of miles when going downhill.

The 2022 Sorento PHEV starts at $46,405 since it comes with AWD and a long list of standard equipment. Our SX Prestige test car in the extra cost Snow White Pearl exterior color costs $49,720 with accessory floor mats. You can also opt for a panoramic sunroof for an additional $1,300. It’s a fantastic value considering all the tech features it comes with and that awesome tritone blue/white/black interior. The Sorento PHEV is eligible for a $6,587 federal tax credit plus local and state incentives.

For perspective, the standard Sorento Hybrid costs $35,345 in the S grade or $37,345 in EX guise. AWD tacks on $1,800 on the former and $2,300 on the latter, which also comes with 19-inch alloy wheels. The Sorento Hybrid EX is also available with the $1,300 Panoramic Sunroof package if you get it with AWD. When you consider these prices and the extra standard equipment on the two trims of the Sorento PHEV, it’s a natural progression of the lineup while retaining the value proposition.

Having the exact amount of everything makes the 2022 Kia Sorento PHEV one of the best crossovers on the market. Think of it as the ideal choice if you’re looking for something with the flexibility of a larger three-row but without the requisite size. This isn’t some bargain-basement offering either; the Sorento PHEV adds just enough richness to radiate an upscale aura. For now, at least, it’s the only plug-in hybrid game in town among three-row mainstream crossovers. Competitors looking to enter the fray need to play their cards right because this segment maker is a formidable opponent with the right number of clever tricks on hand.