2021 Porsche Taycan first drive review: It might be the base, but it’s still a Porsche 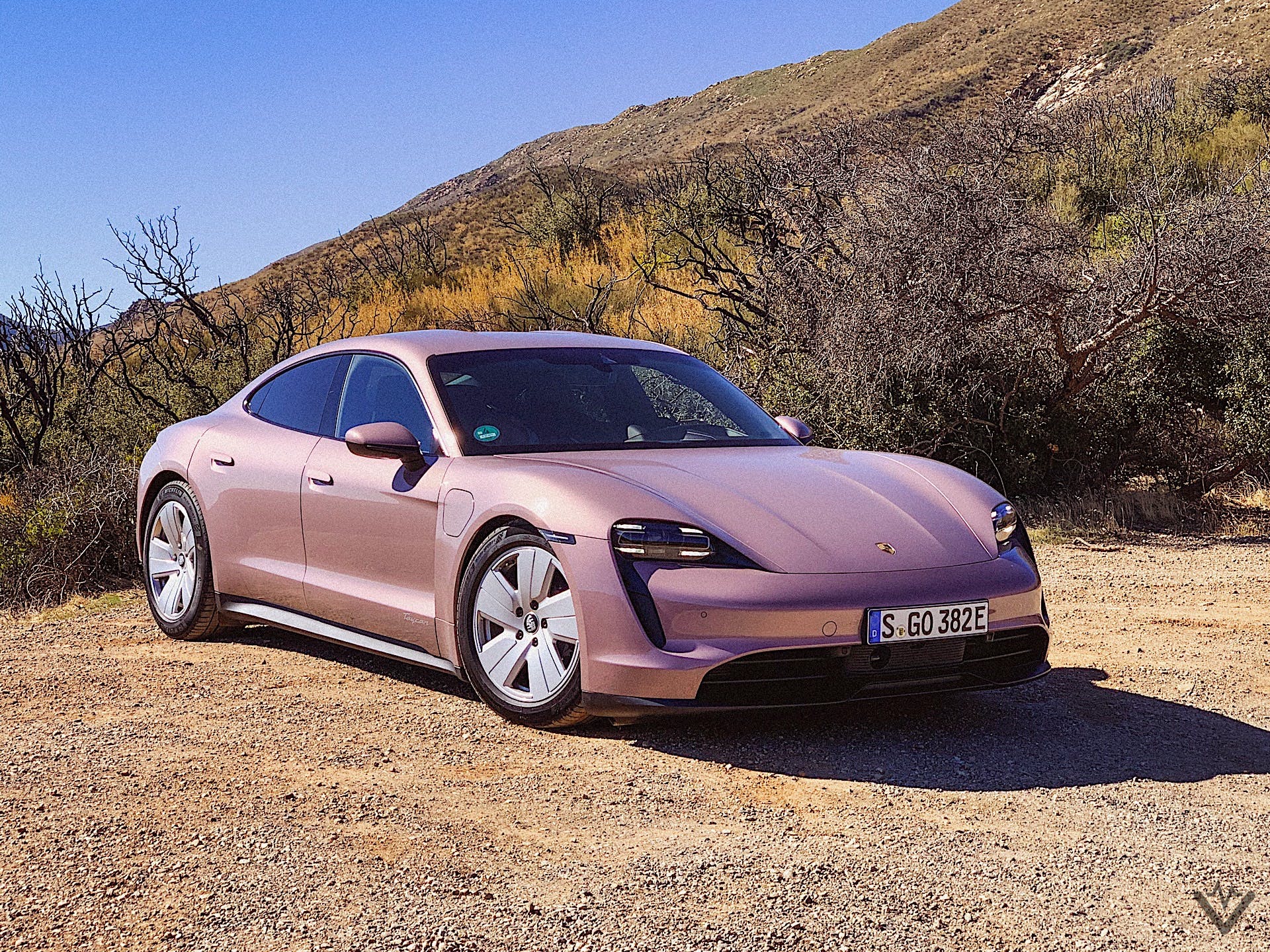 If you listen to Porsche, the company will tell you that it only sells sports cars, despite the Panamera being an executive sedan and the sales leading Cayenne and Macan being sport utility vehicles. The German brand will spin those three models as being sport-focussed Porsches first, and form factor segment leaders second. I don’t know if I agree with all of that, but I have no qualms at all calling the Taycan electric sedan a pure sports car from the Porsche brand. For the first time since the 1997 introduction of the Boxster, Porsche has added another real-deal sports car to its lineup. OK, so it’s not a 928-style Grand Tourer, or a 924-style entry-level sports coupe, but the Taycan is hewn from a pure brick of Porsche DNA.

In case you’ve been living under a rock for the last three to five years, the Porsche Taycan is a compact electric sedan. It’s clearly a Porsche model visually, with wide hips and fenders that rise like mountain ranges from the centerline of the hood, and in typical Zuffenhausen fashion, it doesn’t look like anything else on the road. The line connecting the Taycan to the rest of the company’s driver-focussed history is made even more obvious from behind the wheel. This is exactly the experience I’ve been looking for in an electric enthusiast machine since the start. Truly sublime.

When I tested the Taycan Turbo S back in 2019, I fell in love. It was more than a schoolyard crush. This was head-over-heels deep in it. In modern internet parlance, I’m down bad for the Taycan. Of course, you can almost expect such a response from a near-quarter-million dollar Porsche sports car. Anything costing that much is bound to be a near-religious experience, right? Obviously I was under the influence of 750 horsepower, all-wheel drive traction, and pure speed-induced adrenalin.

I thought that might be the case since I left the presence of that mighty machine. Clearly this level of performance was only available to the super wealthy, and it would still be years, if not decades, before someone like me could afford a fun and fast EV. As I watched the Taycan 4S launch last year to similar reviews, I was given hope that Porsche could hold that level of enthusiast driving experience at a lower price point. The company managed to move 20,000 Taycan units in 2020, despite a pandemic locking down the factory and dealerships for months, an economic crisis, and a still six-figure price tag. The market agrees with me that this is an exceptional car, and it’s proven a huge success.

Porsche ditched the electric motor on the front axle, relying on just one permanent magnet synchronous motor to propel the standard model. Proper sports cars have traditionally been rear wheel drive, and this move by Porsche not only removes weight to improve both performance and efficiency, but by removing weight and forward drive from the wheels that steer, those front tires are now free to focus only on the job of turning. With much of the car’s weight — almost 1400 pounds of battery — mounted down low and inside the wheelbase, rear-wheel drive, and improved steering, the standard Taycan might actually be a better driving experience than its faster siblings. However, with only 469 horsepower available, the RWD model certainly isn’t slow.

The base Taycan is between 400 and 500 pounds lighter than a Turbo or Turbo S, depending on options. It’s not a lightweight by any means, but it’s certainly more nimble and feels less weighty than the alternative. As sports cars continue to get bigger and bulkier, there isn’t much to differentiate between them anyway, and the Taycan hides its weight quite well. This one was optioned with active air suspension and rear wheel steering, which certainly gave the car a more nimble feel than its 4742 pounds might otherwise.

Aside from the nuances of the driving experience, a slight loss of outright 0-60 pace (now quoted at just over 5 seconds), and a lack of forward drive from the front axle, the standard model Taycan feels remarkably similar to the Turbo S I drove in 2019. The build quality is typically Porsche, with clean shutlines, beautiful layouts, vibrant screens, and touchpoints a caliber above anything else in this competitive space.

Sports cars, and in particular ones from Porsche, have pretty much always been reserved for the middle class and higher. Truly groundbreaking sports cars, however, have been toys of the wealthy exclusively. Until now. I know that $80,000 is still a lot of money to spend on a car, but it’s within the realm of possibility for significantly more drivers than the higher end models. Not only is this the one to buy, but it helps that it’s also more affordable. I didn’t make enough on GME last week to be running to my local Porsche dealer to pick one up, but could I be coerced into buying a certified pre-owned lease return in two years? Yeah, I think I might.

While the base RWD Taycan is the bargain of the lineup, the one I drove was stacked up with options in a way that still made it quite expensive. Porsche didn’t provide the exact MSRP of this model, as it was a European-spec model, but based on the options list it looks like it would cost about $110,000 to replicate this car today. Most buyers could probably survive without a lot of these options, but it’s an extremely nice spec with the longer range battery, adaptive air suspension, rear steering, sport chrono pack, thermal and noise insulated window glass, adaptive cruise, a gorgeous Frozen Berry over Blackberry color spec, and more.

How would I option my Taycan? If I were spec-ing out my own at the dealer today, I’d probably forego many of the more expensive options, like the $5,780 Performance Battery Plus extended range battery. I definitely would option the 150 kW onboard charger, however to take full advantage of the Electrify America super fast charging network. Get the car in a color, like Frozen Berry or Gentian Blue, for $800. Adaptive cruise control is a must-have, but I find it almost insulting that it’s a $2,050 option when it should definitely be included as standard on an $80,000 car. Add in heated seats and steering wheel, and bronze interior accents, and you’ve got an attractive, comfortable, and quick enough daily ride for $86,520 delivered. The standard wheels aren’t the prettiest, so I’d probably have to buy a nice set of aftermarket lightweight wheels in an effort to pump up my range numbers a little.

Porsche graciously gave me a full day to drive the Taycan around the southern California region, and I took full advantage, logging just a tick over 400 miles in the process. I hit up some of my favorite driving roads, stopped for a late lunch along the coast while we charged, and got back to the city quite late. Without even trying, in fact I was probably harder on the throttle than I normally would have been, I managed to get that initial charge to travel 223 miles and still had another 45 miles of indicated range left on the meter. With the long-range battery optioned and a fairly calm throttle foot, you should easily be able to exceed 300 miles on a charge regularly.

When I did stop for charge, however, the standard onboard 50 kW charger felt extremely slow after spending time charging at higher speeds at Electrify America and Tesla fast chargers. The Taycan still charges at the fast charging stations like Electrify America, it just peaks at 50 kW.

I can deal with the shorter 215-ish mile range of the 79.2 kWh standard range battery if I have fast charger capabilities for longer road trips. I don’t need to be hauling an extra 150 pounds of battery on my daily drive, I’d rather save that weight and perhaps have an even better driving experience! Sure you lose 67 peak horsepower when you choose the smaller battery, but 402 is probably plenty for a daily driver.

I’ve made it this far without comparing the Taycan to Tesla’s Model S, but I would be remiss if I didn’t at least give it a passing comparison. It’s obvious that the newest Model S revamp a few weeks ago was made as an effort to hold off competition from the Taycan and upcoming Lucid Air. When Tesla increased its base price for the Model S by over 10 thousand dollars, it conveniently matched it exactly with the Taycan at $79,990. Now, obviously the Model S still offers a dual-motor all wheel drive configuration for that price with a claimed 3.1-second 0-60 time and 412 miles of range. Where the Porsche is lacking in range and acceleration, it absolutely dominates in the fun-to-drive factor and provides superior build quality and value. Don’t forget that the Taycan is still eligible for a $7,500 federal tax incentive as well.

Is it a Tesla killer? No. But if you’re looking for a proper sports car from a company that has been building sports cars for over 70 years, but you also want to drive electric, the Taycan is really your only option. For now.

Written by Bradley Brownell
Follow Author
JOIN THE EV PULSE NEWSLETTER
Receive weekly updates on each of our electrifying articles.