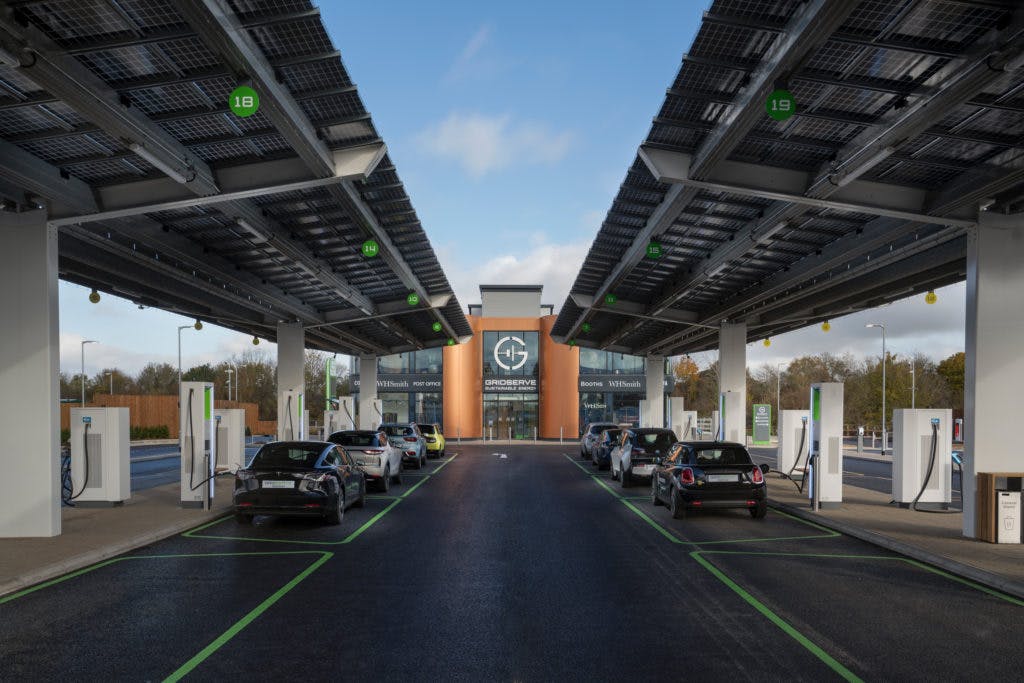 The United Kingdom recently announced its plan to cease sales of gasoline and diesel passenger vehicles by 2030. While that may seem like a ways off still, building the electric charging infrastructure along with bolstering consumer confidence remains a challenge over the next decade. A move in the right direction, the United Kingdom’s first all-electric charging station (think gas station) is now open for business.

UK-based sustainable energy company, Gridserve is behind the initiative, stating the station is just the first of more than 100 it plans to open in the next five years. Like a typical gas station, the ‘Fourcourts’ offer snacks and restrooms for customers. However, unlike the typical fueling stations, Gridserve’s locations will provide conference rooms and well-being areas for a more premium experience.

Located 50 miles northwest of London in Braintree, England, the first station provides 36 covered spots, where EV drivers can charge at speeds up to 350 kWh. This translates to approximately 200 miles of added range in a about 20 minutes. The cost is a reasonable $0.32 per kWh, meaning most users can expect to pay $15 or less each visit. Gridserve notes this is the least-expensive high-speed public charging available today. Delivering fully renewable energy gained through nearby solar and wind farms, the on-site storage can store enough electricity to power vehicles for an estimated 24,000 miles.

While this is a great idea and one that will undoubtedly help consumers feel more confident in EV ownership, it isn’t the first all-electric fueling station. Last fall, a gas station owner in Takoma Park, Maryland converted his pumps to EV fast chargers.

DC fast-charging points are more plentiful these days, but they aren’t on every street corner or freeway exit like gas stations — yet. And while Tesla does have a robust charging network in many countries including the U.K., the stations aren’t always paired with reliable food and restroom options.

A chicken or egg scenario for years, we’re finally starting to see some significant movement on the EV charging infrastructure side. With additional mainstream EV models hitting the roads now, the charging infrastructure is still lacking. We look forward to seeing the growth of electric “gas stations” in the years ahead. But until there are DC fast-chargers on every street corner, be sure to plan your trips accordingly.